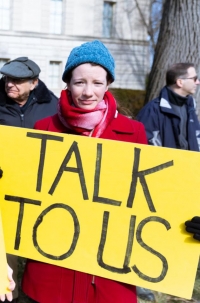 What: Rally
When: Thursday, March 28, 2019, at 2:00 pm
Where: Papal Nunciature, Massachusetts Avenue and 34th St., N.W., Washington, D.C.
Who: Catholic Laity for Orthodox Bishops and Reform
Contact: This email address is being protected from spambots. You need JavaScript enabled to view it.

Catholic Laity for Orthodox Bishops and Reform (Catholic Laity) will rally at the Papal Nunciature on Thursday, March 28, at 2:00 pm.

Catholic Laity has two purposes: the appointment of a worthy shepherd for Washington and establishing a means of communicating effectively with the U.S. hierarchy and the Holy See about Catholic life in the United States. To advance communication with the Holy See, which is in the process of selecting a new archbishop for Washington, Catholic Laity has already written five times to the Papal Nuncio, Archbishop Christophe Pierre, in October, November, December, January, and February to request a meeting to discuss the appointment of a new archbishop. No reply has been received, although Archbishop Pierre made a point in his address to all U.S. Bishops on November 12 that “there can be no question that the insights of experts, the contributions of time and professional skill of all the faithful, laity together with the clergy..., are critical to carrying out our mission as Shepherds. Assistance is both welcomed and necessary, and surely collaboration with the laity is essential.” At the Rally, we will say “HERE WE ARE. TALK TO US.”

The Archdiocese of Washington has been without an Archbishop for nearly six months. It is important for the life of the Archdiocese and even the Catholic Church in the United States that a worthy, robustly Catholic shepherd be provided. We are ready to help if given the chance.

Catholic Laity was founded by Winnie Obike and Donna Bethell, who started two recent online petitions, one to remove Cardinal Donald Wuerl as Archbishop of Washington, https://www.change.org/p/pope-francis-remove-cardinal-wuerlnow/u/23266105, and the other not to appoint Cardinal Joseph Tobin, the reported frontrunner, as Archbishop of Washington until the completion of an investigation into former Cardinal Theodore McCarrick, https://www.change.org/p/archbishop-christophe-pierrecardinal-tobin-must-not-be-made-archbishop-of-washington-before-investigation.

The first petition has 142,400 signatures and is still gaining, as Cardinal Wuerl has resigned but is still running the Archdiocese as Apostolic Administrator, which could continue indefinitely. The second petition has more than 7,500 signatures and is also growing. Its original purpose has been achieved in that Cardinal Tobin has announced that he is not coming to Washington.

The restoration of the Catholic clergy to holiness will require the prayers, persistence, and example of the laity.

[Comment Guidelines - Click to view]
The Remnant values the comments and input of our visitors. It’s no secret, however, that trolls exist, and trolls can do a lot of damage to a brand. Therefore, our comments are heavily monitored 24/7 by Remnant moderators around the country.  They have been instructed to remove demeaning, hostile, needlessly combative, racist, Christophobic comments, and streams not related to the storyline. Multiple comments from one person under a story are also discouraged. Capitalized sentences or comments will be removed (Internet shouting).
The Remnant comments sections are not designed for frequent personal blogging, on-going debates or theological or other disputes between commenters. Please understand that we pay our writers to defend The Remnant’s editorial positions. We thus acknowledge no moral obligation whatsoever to allow anyone and everyone to try to undermine our editorial policy and create a general nuisance on our website.  Therefore, Remnant moderators reserve the right to edit or remove comments, and comments do not necessarily represent the views of The Remnant.
back to top
Last modified on Wednesday, March 27, 2019
Tweet

More in this category: « CATHOLIC IDENTITY CONFERENCE 2019: Mark Your Calendars! AND JUSSIE FOR ALL: A Review of News »