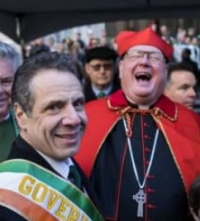 In what might just be the most dramatic nine minutes of television you’ll watch in 2019, a prince of the Church manifests the classic symptoms of SRS (Spine Reduction Syndrome) the moment Fox News hosts ask him to provide a Catholic response to abortion becoming the coolest thing in New York since Frank Sinatra.

Cardinal Dolan was brought in not as theologian to explain the hypostatic union or anything particularly challenging. His job was merely to reiterate Catholic teaching on the intrinsic evil of murdering preborn babies, and maybe conjure up a little manly angst along the way.

Pretty simple assignment. But that's when all stupid broke loose.

The Fox and Friends team pitched one slowly-spinning softball after another to him and we watch, astonished, as each one floats slowly over home plate, sits there for a minute, and then finally sinks into yet another strike, with the batter still lookin'.

Check out the Syrup of Ipecac Interview:

First of all, if the man had been asked to come and speak on the genocide of the Jews, would he really have opened with another stupid joke? That’s a minor point. Fine! Let’s move on…

Let us now open our biology books and our Declaration of Independence to figure out why abortion isn't, well, very "progressive" at all, dang it!

Not progressive? Yes, well, better not get bogged down in a lot of Catholic stuff since, according to His Eminence, Little Abortion Andy's alleged Catholicism is irrelevant to this discussion, anyway.

Come to think of it, most of the political nutters in American politics are mutant byproducts of Vatican II and the New Mass, and thus pretty cool with abortion -- from Senator Ted Kennedy to Nancy Pelosi to Governor Cuomo, Joe Biden, Gavin Newsom, Kirsten Gillibrand, Patrick Leahy all the way down to the insufferable Tim Kaine. All non-excommunicated Catholics to a man, woman or whatever might lie between!

The Abortion Issue According to Dolan:

As long as the opponents of life argued for “safe, legal, and rare” abortion, we could rest easy.

Get pretty worked up about how it’s now going to be “unsafe, mandatory and frequent”, but save the special righteousness for the fact that some people are celebrating this, like with “champagne and brie” and stuff.

The public figure who claims to be Catholic and who signed the nation’s “most aggressive” women’s health (READ: partial birth abortion) act into law is not the concern of the Church… because that’s a pastoral and spiritual thing… which “somebody” should talk to him about… but not Dolan. Dolan isn’t Cardinal enough for that (the permutations of logic that happened there are the reason your head hurts and your face feels hot).

Oh no, we certainly can’t excommunicate the Governor for this, because that’s what he wants and that would be "playing into the hands" of the enemy who would--wait for it--say that the Church is too, well, you know, just too intolerant, and everybody knows New York's Cardinal Archbishop is the very picture of laugh and let laugh! The haters of life want the Church to be that stereotypical bigot, so we’re gonna sit this one out, thank you very much. See how clever and classy? He's even got working knowledge of sophisticated VIP food like brie!

Keep the conversation away from the moral and obvious reasons why abortion is cold-blooded murder and those children are souls loved into existence by God and entrusted to mothers who are damning their own souls in the process.

Instead, try really hard to steer the topic onto that of education and strong public schools, it’s safer and makes us feel better. Plus, watch us take a shot at SOCIAL MEDIA. Now, that's guts cardinaling!

What I don’t understand is why this big fellow doesn't try to exploit the national outrage over New York's abortion law to beef up his flagging Catholic cred, tough talk on baby-killing typically being the last refuge of the spineless Catholic.

Could it be that even strong talk against the pro-aborts creates more waves than these guys can handle, as they paddle around the kiddie pool in their neo-Catholic water wings?

In this case, even secular media folks were looking at the top gun of the Catholic Church in America, and positively begging him to reaffirm their own feelings of horror at the new law. All they got was another stupid joke followed by a blast of mighty wind.

In his effort to keep his gig and his BFF status with the Gov., Cardinal Dolan let down every faithful priest and Catholic lay person, to say nothing of every tiny human whose heart will cease to beat as a result of the Reproductive Health Act.

In case you're curious, Eminence, this is what Catholics in the real Church--as opposed to your Church of Idiocracy--are concerned about: 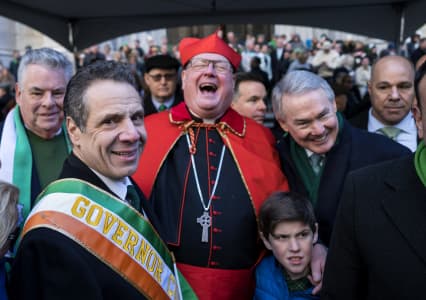 Your Eminence, you're embarrassing us. You're not funny. You're ageing. You're unhealthy. Isn't it time for you to try something else for a change--like doing your job?

[Comment Guidelines - Click to view]
The Remnant values the comments and input of our visitors. It’s no secret, however, that trolls exist, and trolls can do a lot of damage to a brand. Therefore, our comments are heavily monitored 24/7 by Remnant moderators around the country.  They have been instructed to remove demeaning, hostile, needlessly combative, racist, Christophobic comments, and streams not related to the storyline. Multiple comments from one person under a story are also discouraged. Capitalized sentences or comments will be removed (Internet shouting).
The Remnant comments sections are not designed for frequent personal blogging, on-going debates or theological or other disputes between commenters. Please understand that we pay our writers to defend The Remnant’s editorial positions. We thus acknowledge no moral obligation whatsoever to allow anyone and everyone to try to undermine our editorial policy and create a general nuisance on our website.  Therefore, Remnant moderators reserve the right to edit or remove comments, and comments do not necessarily represent the views of The Remnant.
back to top
Last modified on Tuesday, January 29, 2019
Tweet