Omaha attorney Brian Buescher was nominated by President Donald Trump to serve on the U.S. District Court in Nebraska, filling the post of Chief Judge Laurie Smith Camp, who announced that she is taking senior status effective Dec. 1.

Buescher has since come under hate-fire from the Left for his membership in the charitable organization known as the Knights of Columbus. His main critics are Democratic Senators Kamala Harris and Mazie Hirono, and this isn’t the first time one of Trump’s nominees has faced discrimination over religious views (remember Amy Barrett?)

“The Knights of Columbus has taken a number of extreme positions,” Hirono said in the questionnaire. “For example, it was reportedly one of the top contributors to California’s Proposition 8 campaign to ban same-sex marriage.”

Harris, in her questions to the nominee, called the Knights of Columbus “an all-male society” and asked the Nebraska lawyer if he was aware that the group was anti-abortion and anti-gay marriage when he joined. The California senator also referenced Supreme Knight Carl A. Anderson’s statement that abortion amounted to “the killing of the innocent on a massive scale” and asked Buescher if he agreed with the statement.    (Read Buescher’s responses HERE)

REMNANT COMMENT: Have these people lost their minds completely?  This Senator Hirono character reminds me of something right out of Oceania's Ministry of Truth. Someone disagreeing with her may or may not be permitted to speak in the days to come. And if that someone happens to be a man well, obviously, forget about it:

It's hardly surprising that someone as unhinged as this woman appears to be would also have big problems with the Knights of Columbus—Father Michael J. McGivney's 140-year-old Catholic fraternal benefit society with its 15,900 councils and 1.9 million members throughout the United States, Canada, the Philippines, Mexico, Poland, the Dominican Republic, Puerto Rico, Panama, the Bahamas, the Virgin Islands, Cuba, Guatemala, Guam, Saipan, Lithuania, Ukraine, and South Korea.

The anti-Christians are becoming bold indeed!

I remember when a Catholic had to be a "radical traditionalist" before he could be branded a member of a hate group. These days even membership in the mild-mannered and rather politically correct KofC with their funny hats and dull swords will evidently suffice.

Never mind that over the past century the Knights of Columbus have forged international charitable partnerships with Special Olympics, the Global Wheelchair Mission and Habitat for Humanity, along with their own Food for Families and Coats for Kids projects and other local charities all over the country.

Never mind that since the very beginning, the Knights could be reliably counted on to be as flag-waving patriotic as any of their WASP counterparts.

Never mind that the Knights volunteered more than 75 million hours of community service in the same calendar year.

Never mind all that!  According to Hirono and Harris, haters have to hate, and judges linked to the Knights of Columbus must be judged unfit to judge.

How such bald-faced religious discrimination in America can be legal is anyone’s guess. But there you have it.

We've gone back to the future, to the Know Nothing movement of the late 19th century, where any affiliation with the Catholic Church is subject to discrimination and even disqualification from public service, which, by the way, is exactly what Pope Pius X predicted in Vehementer Nos would happen once Modernists of every stripe had succeeded in getting the traditional Catholic Church out of the way. Way back in 1906 he warned against those who would bar Catholics from positions of influence in public life in order to keep the law of God out of politics.

Well, here we are. They’re expelling Christ from public life by seeking to bar faithful Catholics from public office. (Nancy is exempt from all this, obviously, "faithful" being the operative word).

According to the ladies, Catholics need not apply.
(Senator Harris, Knights of Columbus, Senator Hirono) 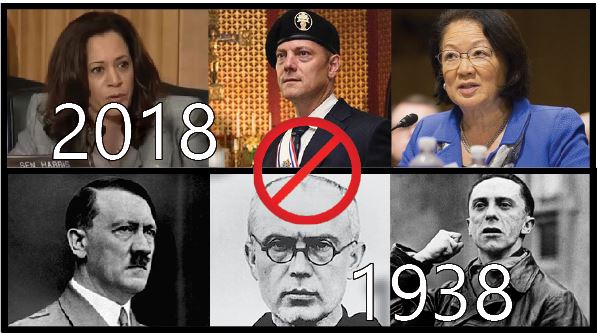 But where have we seen this kind of totalitarian intolerance before? Oh, that's right -- Nazi Germany, where the goose-steppers set up those fun little camps for “political prisoners” who disagreed with the fellows in charge. The Soviets did the same thing, of course. Atheists are funny like that.

But in Germany, yes, little out-of-the-way places like Dachau became all the rage. Nicknamed the 'largest monastery in the world" (because of the high number of Catholic priests consigned to live and die there), Dachau--the very first concentration camp--was erected just outside of Munich in 1933 as sort of State-sponsored” public housing" for Catholic priests and others in the 'basket of deplorables' of those days.

And these priests were arrested by folks who, not unlike Harris and Hirono, just didn't like what Catholics had to say.  They were the prototype of what Orwell would christen the Thought Police in his dystopian novel a few years later.

To avoid the Nazi Thought Police, Pope Pius XI had to have his encyclical Mit brennender Sorge, "With burning concern" On the Church and the German Reich smuggled into Germany to be read by every priest from the pulpit on Palm Sunday of 1937. Why?  Because Catholic popes and priests were refusing to hold their tongues then as Harris and Hirono think the Knights of Columbus need to hold theirs today. It's the same old anti-Catholic story, just different characters.

Here's some actual footage of those imprisoned Catholic priests in Dachau:

In his July 2017 Catholic Herald article “The Harrowing Untold Story of the Priests in Dachau,” Francis Phillips highlights a few vignettes that inadvertently speak to the power of the Traditional Latin Mass to keep hope alive even in Nazi Hell:

Not to be able to celebrate Mass was a huge deprivation for the imprisoned priests. As one of their number, Fr Bedrich Hoffmann, relates, “What it means for a priest to live without Mass and without Communion can only be understood by another priest.” On admission, they were divested of their cassocks, bibles, missals, holy medals and rosaries, stripped and shaved and given old clothes with a red triangle sewn on them – the sign for “political” detainees.

However, as the result of intense diplomatic pressure from the Vatican, the situation changed at the end of 1940, when a chapel was permitted to be set up in Block 26. The first Mass at Dachau was celebrated on 21 January 1941. The tabernacle had been made secretly in the carpenter’s workshop; the altar and candlesticks had been salvaged from camp materials; and parishioners who had managed to stay in touch with their imprisoned priests, sent vestments, prayer books, Stations of the Cross, holy pictures and two monstrances.

The SS officials who ran the camp naturally placed many restrictions on the liturgical services. Lay prisoners were forbidden to attend – though Communion was secretly distributed to Catholics in other barracks at the risk of severe punishments, and sometimes other prisoners secretly attended Mass or hovered near the chapel window in order hear as much of the liturgy as possible.

One of them, Joseph Rovan, wrote later in his recollections of Dachau: “The priest was saying the same Latin words that all his confreres, at the same hour, were repeating in their morning Masses throughout the world. No longer could I recall the world of the concentration camp. Each one, for a precious moment, was restored to his original, fragile and indestructible dignity…On the way out, in the pale light of the early morning, one felt capable of facing a little better the hunger and the fear.”

Another prison, Marcel Dejean, echoes this: “…We rediscovered the idea of Love in the midst of suffering, hunger, egoism, hatred or indifference and also a palpable sense of calm: the beauty of the altar…in the midst of our filth and poverty, tranquility, recollection and solitude in the midst of constant overcrowding…The SS were no longer anything but a sad nothingness beside the splendid, immortal reality of Christ.”

Here in 2018, we're not quite there yet but, given the way things are going, it may go that way if Trump loses in 2020 and the democrats get their chance to take revenge on all the Christians who voted for him in 2016. In that case, our little Knights of Columbus witch-hunt may be remembered as an early sign of the burgeoning Christophobia that eventually went on a rampage in America.

And with Pope Francis at the helm, you can forget about another Mit brennender Sorge moment.

Our best political hope may be the man the New World Order loves to hate. So be careful what you pray for, Never Trumpers.

The Democrats--out there hunting down Knights of Columbus--are obviously getting pretty desperate. Who's next on the Radical Traditionalist Hate Map -- Net Ministries?

[Comment Guidelines - Click to view]
The Remnant values the comments and input of our visitors. It’s no secret, however, that trolls exist, and trolls can do a lot of damage to a brand. Therefore, our comments are heavily monitored 24/7 by Remnant moderators around the country.  They have been instructed to remove demeaning, hostile, needlessly combative, racist, Christophobic comments, and streams not related to the storyline. Multiple comments from one person under a story are also discouraged. Capitalized sentences or comments will be removed (Internet shouting).
The Remnant comments sections are not designed for frequent personal blogging, on-going debates or theological or other disputes between commenters. Please understand that we pay our writers to defend The Remnant’s editorial positions. We thus acknowledge no moral obligation whatsoever to allow anyone and everyone to try to undermine our editorial policy and create a general nuisance on our website.  Therefore, Remnant moderators reserve the right to edit or remove comments, and comments do not necessarily represent the views of The Remnant.
back to top
Last modified on Saturday, December 29, 2018
Tweet