Sitting On His Throne of Moses, Francis Closes Synod 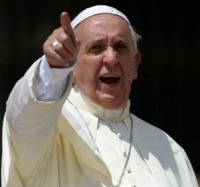 VATICAN CITY (AP) — Pope Francis has wrapped up a monthlong meeting of bishops dedicated to young people by saying the Catholic Church is being "persecuted" and "dirtied" by accusations — an apparent reference to the clergy sex abuse and cover-up scandal.

Francis acknowledged Saturday that there were sinners in the church. But he insisted that the church itself is holy and must be protected from attacks and "another type of persecution: continuous accusations to dirty the church."

Remnant Comment:  Who is Francis accusing this time?  Why is he accusing others of doing terrible things but refusing to name them, to give them a chance to defend themselves? Why can he not be more merciful to those he’s accusing?  Does he not know that only the merciful are like God the Father?

Leave them alone, Francis!  Stop being so judgmental. Stop being so rigid as you sit there on your chair of Moses, judging with superiority and superficiality difficult cases and wounded people.  Stop throwing your stones. You are behaving like the great accuser and the "little ones" all over the world are scandalized.

[Comment Guidelines - Click to view]
The Remnant values the comments and input of our visitors. It’s no secret, however, that trolls exist, and trolls can do a lot of damage to a brand. Therefore, our comments are heavily monitored 24/7 by Remnant moderators around the country.  They have been instructed to remove demeaning, hostile, needlessly combative, racist, Christophobic comments, and streams not related to the storyline. Multiple comments from one person under a story are also discouraged. Capitalized sentences or comments will be removed (Internet shouting).
The Remnant comments sections are not designed for frequent personal blogging, on-going debates or theological or other disputes between commenters. Please understand that we pay our writers to defend The Remnant’s editorial positions. We thus acknowledge no moral obligation whatsoever to allow anyone and everyone to try to undermine our editorial policy and create a general nuisance on our website.  Therefore, Remnant moderators reserve the right to edit or remove comments, and comments do not necessarily represent the views of The Remnant.
back to top
Last modified on Monday, October 29, 2018
Tweet