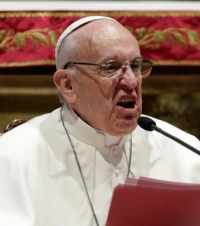 LifeSiteNews is reporting that  the founder of U.S. Catholic publishing house Ignatius Press has called for Pope Francis to answer Archbishop Viganò’s allegations that he knowingly promoted an American cardinal accused of abusing seminarians and priests.  Father Joseph Fessio, SJ, told CNN that he finds the pontiff’s refusal to give an answer “deplorable”. In recent weeks, commentators have interpreted Pope Francis’ homilies about “the Great Accuser” and Christ’s “silence” as coded commentary on the Vatican whistleblower’s testimony and the pontiff’s own reluctance to answer it.

“He’s attacking Viganò and everyone who is asking for answers,” Fessio told CNN. “I just find that deplorable. Be a man. Stand up and answer the questions,” he added. READ MORE HERE

By now it should be abundantly obvious to everyone who is not Mark Shea that this is not "traditional Catholic" crepe hanging. Father Fessio is hardly a "rad trad". Catholics everywhere--those still bothering to go to Mass on Sunday, at any rate-- know that the very future of the Church is on the line.

Francis is out of control, and by refusing to answer the charges he is discrediting the papacy and running the Catholic Church into the ground. Catholics thus have a sacred duty before God to resist this man to his face.

His pontificate is already a massive scandal, and the only way to undo the damage he's done (if indeed he wants to) is for Francis to stop with the endless self-promotion, cease and desist with the school-marm lecturing of faithful Catholics, drop the whole "humble pope" routine, and answer the damn...ing charges.

Until that happens we pledge to dedicate the rest of our lives to making sure that his arrogant dereliction of duty and endangerment of children remain front and center in the minds of historians and the Catholic faithful for years to come.

Francis is an old man; the Catholic press will soon take control of his legacy. And that's not going to be pretty.  So this is Francis's last chance to, quite frankly, get over himself. The "humble pope" schtick is not only tiresome, it's offensive.

It's over, Francis! To quote Father Fessio: "Be a man. Answer the charges!"

[Comment Guidelines - Click to view]
The Remnant values the comments and input of our visitors. It’s no secret, however, that trolls exist, and trolls can do a lot of damage to a brand. Therefore, our comments are heavily monitored 24/7 by Remnant moderators around the country.  They have been instructed to remove demeaning, hostile, needlessly combative, racist, Christophobic comments, and streams not related to the storyline. Multiple comments from one person under a story are also discouraged. Capitalized sentences or comments will be removed (Internet shouting).
The Remnant comments sections are not designed for frequent personal blogging, on-going debates or theological or other disputes between commenters. Please understand that we pay our writers to defend The Remnant’s editorial positions. We thus acknowledge no moral obligation whatsoever to allow anyone and everyone to try to undermine our editorial policy and create a general nuisance on our website.  Therefore, Remnant moderators reserve the right to edit or remove comments, and comments do not necessarily represent the views of The Remnant.
Last modified on Tuesday, September 25, 2018