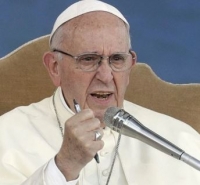 At least the Archbishop of Philadelphia gets it: Precisely now—as the scandal of the century explodes in the faces of the Pope and his posse—is not a great time to hold a synod of bishops which focuses on the youth… the irony isn’t even funny; it’s downright gross. Is anyone still handing the Pope babies to kiss these days?

As reported by LifeSiteNews, Archbishop Chaput stated what should be patently obvious: “The bishops would have absolutely no credibility.” Chaput used this reasoning in a letter to Pope Francis in which he called on his superior to cancel the synod and instead spend the resources on a type of retraining program for bishops.

Yes, it’s not the youth who need the most help right now, it’s the bishops. They’ve veered so far off course that a synod is now required which reminds them of their own sworn duties before God and His children.

And, thank God, a few good prelates would probably agree with him.

Ten bishops and counting have given public support in the last week to Archbishop Viganò’s character and to the credibility of his testimony:

- Archbishop Charles Chaput of Philadelphia, PA, vouched for the former Nuncio's character, saying he "found his service to be marked by integrity to the church."

- Bishop Thomas J. Paprocki of Springfield, IL, said, “Given the gravity of the content and implications of the former Nuncio’s statement, it is important for all the facts of this situation to be fully reviewed, vetted, and carefully considered.”

- Archbishop Samuel J. Aquila of Denver, CO, cited Cardinal DiNardo in a statement which included: “the questions raised deserve answers that are conclusive and based on evidence. Without those answers, innocent men may be tainted by false accusation and the guilty may be left to repeat sins of the past.”

- Cardinal DiNardo, the president of the U.S. Bishops Conference (USCCB)

- Bishop Joseph Strickland of Tyler, TX, has gone so far as to order all the priests in his diocese to read from the pulpit a statement that he finds Viganò’s allegations credible.

- Archbishop Cordileone of San Francisco, CA, in an open letter to his faithful, “can attest that [Archbishop Viganò] is a man who served his mission with selfless dedication, who fulfilled well the Petrine mission entrusted to him.”

- Bishop Thomas Olmsted of Phoenix, AZ, issued a statement affirming that he has known Viganò for 39 years, has “always known and respected him as a man of truthfulness, faith and integrity” and that his testimony should “be taken seriously by all…”

- Archbishop Allen Vigneron of Detroit, MI, issued a statement calling Viganò’s account “another daunting challenge to our confidence in the reliability of the Church’s leadership, during a summer of devastating news regarding clergy sexual abuse and infidelity.” (The statement has since apparently been scrubbed from the diocesan website.)

- Bishop Athanasius Schneider declares: “Archbishop Viganò confirmed his statement by a sacred oath invoking the name of God. There is, therefore, no reasonable and plausible cause to doubt the truth content of the document of Archbishop Carlo Maria Viganò.”

- Cardinal Raymond Burke’s statement declares: “The declarations made by a prelate of the authority of Archbishop Carlo Maria Viganò must be totally taken to heart by those responsible in the Church.”

The Remnant established the #StopTheSynod2018 some weeks ago more as a provocation than anything. But now that even prominent archbishops are also calling on the Vatican to do the right thing and knock it off, momentum for this effort is sure to increase.

So let's go here! Please, sign the petition below, send it to your friends and family, post the link on your Facebook page---and let's send a clear message to the Vatican: Stay away from the kids!

[Comment Guidelines - Click to view]
The Remnant values the comments and input of our visitors. It’s no secret, however, that trolls exist, and trolls can do a lot of damage to a brand. Therefore, our comments are heavily monitored 24/7 by Remnant moderators around the country.  They have been instructed to remove demeaning, hostile, needlessly combative, racist, Christophobic comments, and streams not related to the storyline. Multiple comments from one person under a story are also discouraged. Capitalized sentences or comments will be removed (Internet shouting).
The Remnant comments sections are not designed for frequent personal blogging, on-going debates or theological or other disputes between commenters. Please understand that we pay our writers to defend The Remnant’s editorial positions. We thus acknowledge no moral obligation whatsoever to allow anyone and everyone to try to undermine our editorial policy and create a general nuisance on our website.  Therefore, Remnant moderators reserve the right to edit or remove comments, and comments do not necessarily represent the views of The Remnant.
Last modified on Monday, September 3, 2018