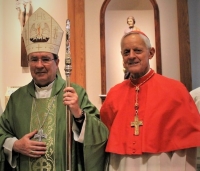 The following appeared this morning at GuildofBlessedTitus.com. We'd like to help spread the excellent idea:

Write to the Apostolic Nuncio

In the wake of the Theodore McCarrick scandal, the release of the Pennsylvania grand jury report, and the Testimony of Archbishop Carlo Maria Viganò, some may be interested in writing to the Apostolic Nuncio in Washington, DC, to express their concern and request action.  Addresses and suggested points to mention in your letter are provided below.

Be sure to mention that you realize the problem goes much deeper than sexual deviancy in the hierarchy and clergy, and that it includes theological and liturgical deviancy as well.  See here and here.

You may want to request some or all of these points:

Be sure to copy Donald Wuerl, Blaise Cupich, Joseph Tobin, and Robert McElroy.  Their addresses are included below.

Finally, it is recommended that you inform the Nuncio that you will pray for him, the Pope, bishops, priests, and the Church, as well as the victims.  You are encouraged to offer reparation to Almighty God, as well.

[Comment Guidelines - Click to view]
The Remnant values the comments and input of our visitors. It’s no secret, however, that trolls exist, and trolls can do a lot of damage to a brand. Therefore, our comments are heavily monitored 24/7 by Remnant moderators around the country.  They have been instructed to remove demeaning, hostile, needlessly combative, racist, Christophobic comments, and streams not related to the storyline. Multiple comments from one person under a story are also discouraged. Capitalized sentences or comments will be removed (Internet shouting).
The Remnant comments sections are not designed for frequent personal blogging, on-going debates or theological or other disputes between commenters. Please understand that we pay our writers to defend The Remnant’s editorial positions. We thus acknowledge no moral obligation whatsoever to allow anyone and everyone to try to undermine our editorial policy and create a general nuisance on our website.  Therefore, Remnant moderators reserve the right to edit or remove comments, and comments do not necessarily represent the views of The Remnant.
back to top
Last modified on Wednesday, August 29, 2018
Tweet