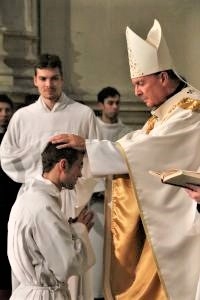 In August FirstThings reported on the vocation crisis in Europe. Included was the desperate appeal to Rome of a thriving new order of priests from Belgium. The Fraternity of the Holy Apostles was threatened with dissolution by a newly-appointed Cardinal who took offense at the order’s, well, Catholicism:

In Germany, vocations have become practically nonexistent. In 2016, there was just one new seminarian in Munich, the historic capital city of German Catholicism. In Belgium, the situation is perhaps still worse. In 2016, there was not a single new Francophone seminarian in the country. The heroic André-Joseph Léonard, archbishop of Brussels from 2010 to 2015, had given life to a new association, the Fraternity of the Holy Apostles. In a period of three years, the Fraternity had assembled twenty-one seminarians and six priests. The current archbishop of Brussels, Jozef De Kesel, was appointed a cardinal immediately upon his installation—an honor denied to Léonard. De Kesel quickly dissolved the Fraternity. The official reason was formal and flimsy; the real one was substantial. The Fraternity was not liberal enough; it respected tradition.

Since then, the order appealed to Rome. They were in the process of appealing to the Apostolic Signatura, the highest Vatican court, but the Pope personally intervened in the legal process by decree. Without waiting for ecclesiastical justice to follow its natural course, Pope Francis definitively dissolved the Fraternity for being hated by the anti-Catholic Cardinal of Brussels, Jozef De Kesel.

GloriaTV explains further: But in a time of mass-immigration, De Kesel claimed that the group needed to be dissolved because “too many” of them were French while in the national seminary in Namur out of 80 seminarians only 25 are from Belgium.

On April 12 Marco Tosatti, writing on LaNuovaBQ.it, broke the news that an appeal in front of the Apostolic Signature by laypeople against the killing of the community has been stopped by Pope Francis because the judges were in favour of accepting it. 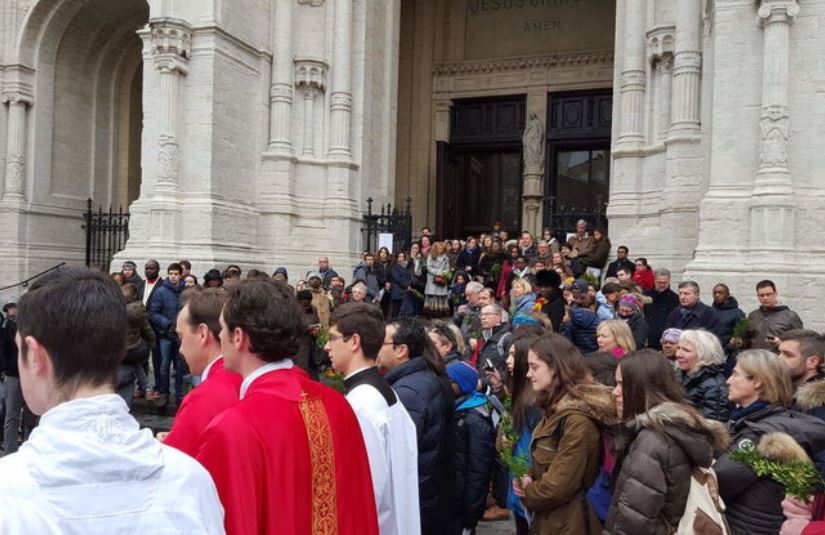 Catholics gathered to pray for the preservation of the order.

Tosatti calls this an “ugly story” that certainly does not cast a good light on Pope Francis.

The biggest religious group in Brussels is Islam.

Brussels is not an isolated case, of course:

Remember the Franciscan Friars of the Immaculate? Rich in vocations both in Europe and in Africa, inspired by St. Maximilian Kolbe and approved by John Paul II. But five years ago it was put under the authority of a Vatican commissioner, and one year ago it was dissolved by Pope Francis.

There is the similar case of the Family of the Incarnate Word. This religious order, begun in Argentina in the 1980s, has more than one thousand members in twenty-six countries on five continents, including in regions where nobody else is willing to go. The Family has roughly 800 seminarians. Jorge Mario Bergoglio, then archbishop of Buenos Aires and president of the Argentine bishops’ conference, did not care for the Family. He made reference to it, while addressing the bishops: “In Latin America we happen to find in small groups, and in some of the new religious orders, an exaggerated drift to doctrinal or disciplinary security.” At one time, he blocked the ordination of the Family’s priests for three years. The founder, again, is more or less segregated from his order.

COMMENT: We're well aware of the fact that there are often “two sides to the story” when it comes to cases such as these. We do not pretend to have "inside dope" on this one, and I would imagine the various factions have differing accounts of what this is all about.

We do, however, see a pattern here. The Pope, who promotes the likes of Father James Martin and even runs cover for predators such as Chilean Bishop Juan Barros, can be relied upon to spring into action against priests with an orthodox or traditionalist bent.

Cardinal Burke and his allies have been waiting since September of 2016 for Pope Francis to answer their urgent request for clarification of Amoris Laetitia. But like the wartime refugees waiting for the plane to Lisbon in the old movie, Casablanca, they wait and wait and wait…

Pope's a busy man, I get it... but evidently not too busy to act with lightning speed on behalf of the Brussels' cardinal who had a Church of Accompaniment crisis on his hands—entirely too many vocations in a Tradition-leaning order of priests.

Then there's the Society of Saint Pius X which feels confident that the “friendship” of the Argentinian pope—whose apparent goal is to rid the entire Church of Faith and Tradition—will somehow shield them from the proactive modus operandi of the Bergoglian steamroller.

Let’s pray that God will somehow provide an invisible cloak or something similar for our friends in the SSPX, should they ever come under the fatherly benevolence of Pope Francis the Great.

[Comment Guidelines - Click to view]
The Remnant values the comments and input of our visitors. It’s no secret, however, that trolls exist, and trolls can do a lot of damage to a brand. Therefore, our comments are heavily monitored 24/7 by Remnant moderators around the country.  They have been instructed to remove demeaning, hostile, needlessly combative, racist, Christophobic comments, and streams not related to the storyline. Multiple comments from one person under a story are also discouraged. Capitalized sentences or comments will be removed (Internet shouting).
The Remnant comments sections are not designed for frequent personal blogging, on-going debates or theological or other disputes between commenters. Please understand that we pay our writers to defend The Remnant’s editorial positions. We thus acknowledge no moral obligation whatsoever to allow anyone and everyone to try to undermine our editorial policy and create a general nuisance on our website.  Therefore, Remnant moderators reserve the right to edit or remove comments, and comments do not necessarily represent the views of The Remnant.
back to top
Last modified on Tuesday, April 17, 2018
Tweet