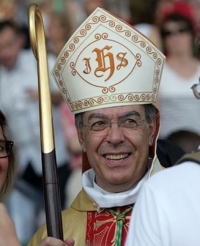 On January 6, 2018, right to life in Paris received a tremendous advocate:

National Catholic Register: “…Paris now has a vigorous new pro-life champion for its archbishop! His installation [was] Jan. 6.

Archbishop Aupetit, 66, was something of a “late vocation” (if you only count the priesthood as a vocation): He was ordained at age 44, after a previous vocation as a medical doctor. He practiced medicine from 1979 to 1990 and taught bioethics until 2006. His book, L’Embryon, Quells Enjeux? (The Embryo: What Are the Stakes? Paris: Éditions Salvator, 2008) is a vigorous defense of the unborn child.

…What is most appealing about Archbishop Aupetit is that, as a medical doctor, he has the scientific background and expertise necessary to engage and respond to the bioethicists ready to bless the next case of embryo experimentation here or euthanasia there. There is still an aura about the white-laboratory-coated “expert” that affords him deference — often undue deference — to conduct experiments or even formulate public policy. Part of that aura stems from his biological or medical knowledge that his audience neither has nor often understands, so they are ready to give him the benefit of the doubt.

The value of Archbishop Aupetit is that he can stand toe-to-toe with them and offer plausible rebuttals, having the same command of biology and medicine as his opponent.” Read the full report HERE

REMNANT COMMENT: It is tragically indicative of the nature and full extent of the crisis in the Catholic Church when a new bishop is highly praised merely for being pro-life, as though that's no longer a given.  Well, in fact it's not.  Lots of things once considered givens ain't necessarily so anymore. (Something about popes always and forever being unquestionably Catholic comes to mind.)

Still, the new Archbishop of Paris is highly regarded in the pro-life community and at least is not known to be not supportive of the Traditional Latin Mass movement. In fact, Angelqueen reported a possible good sign in this regard:

Bishop Michel Aupetit, 66, of Nanterre, a former medical doctor, will be the next archbishop of Paris according to the French Journalist Frederic Martel writing on Twitter. Martel refers to “informal contacts in Rome”. On November 11, Nanterre Diocese celebrated the tenth anniversary of Summorum Pontificum with a Tridentine Latin Mass in Nanterre cathedral. The Latin Mass was even announced on the diocesan website.

Here's to hoping and praying for the best in Paris.

[Comment Guidelines - Click to view]
The Remnant values the comments and input of our visitors. It’s no secret, however, that trolls exist, and trolls can do a lot of damage to a brand. Therefore, our comments are heavily monitored 24/7 by Remnant moderators around the country.  They have been instructed to remove demeaning, hostile, needlessly combative, racist, Christophobic comments, and streams not related to the storyline. Multiple comments from one person under a story are also discouraged. Capitalized sentences or comments will be removed (Internet shouting).
The Remnant comments sections are not designed for frequent personal blogging, on-going debates or theological or other disputes between commenters. Please understand that we pay our writers to defend The Remnant’s editorial positions. We thus acknowledge no moral obligation whatsoever to allow anyone and everyone to try to undermine our editorial policy and create a general nuisance on our website.  Therefore, Remnant moderators reserve the right to edit or remove comments, and comments do not necessarily represent the views of The Remnant.
back to top
Last modified on Thursday, January 11, 2018
Tweet