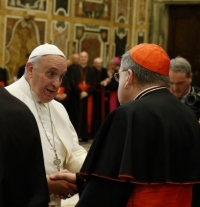 In keeping with his penchant for surprises, Pope Francis brings Cardinal Burke back to the Vatican high court. According to this Associated Press report:

Francis appointed Burke as a member of the Apostolic Signatura on Saturday. Members serve as advisers to the court, which currently is headed by a longtime Vatican diplomat, Cardinal Dominique Mamberti.

Francis removed Burke as the court's prefect in 2014 and named him envoy to the Knights of Malta lay religious order. The pope then effectively sidelined Burke from that job this year after he intervened in a condom scandal that led to a governance crisis in the order.

REMNANT COMMENT: So, what have we here? The Remnant's position on Cardinal Burke is that he's been more effective in neutralizing the errors of Pope Francis as a free agent, if you will—flitting from pillar, to post, to church basements, giving conferences and encouraging the faithful to stay strong--than when he was locked in Rome as head of the Apostolic Signatura.

Our contention has been that Cardinal Burke in exile was indirectly broadcasting his concerns all across the world, leaving everyone--even the folks at the Vatican--on tenterhooks, wondering what he'd do next.

Apparently the folks in the Vatican, starting with Pope Francis, saw it the same way. Time to rein in Cardinal Burke. Why? Well, Pope Francis knows a lot about the mafia, so let’s have Michael Corleone explain:

[Comment Guidelines - Click to view]
The Remnant values the comments and input of our visitors. It’s no secret, however, that trolls exist, and trolls can do a lot of damage to a brand. Therefore, our comments are heavily monitored 24/7 by Remnant moderators around the country.  They have been instructed to remove demeaning, hostile, needlessly combative, racist, Christophobic comments, and streams not related to the storyline. Multiple comments from one person under a story are also discouraged. Capitalized sentences or comments will be removed (Internet shouting).
The Remnant comments sections are not designed for frequent personal blogging, on-going debates or theological or other disputes between commenters. Please understand that we pay our writers to defend The Remnant’s editorial positions. We thus acknowledge no moral obligation whatsoever to allow anyone and everyone to try to undermine our editorial policy and create a general nuisance on our website.  Therefore, Remnant moderators reserve the right to edit or remove comments, and comments do not necessarily represent the views of The Remnant.
back to top
Last modified on Saturday, September 30, 2017
Tweet