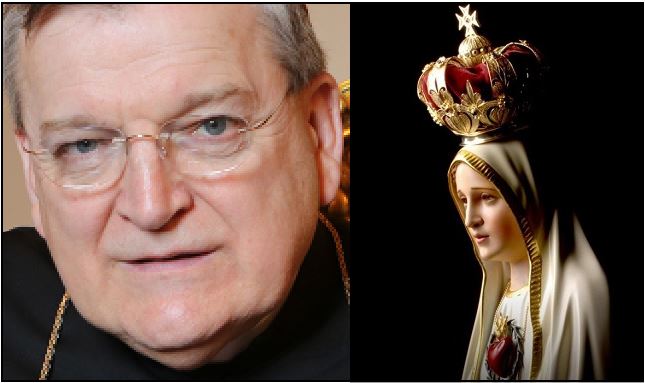 ROME, May 19, 2017 (LifeSiteNews) – Cardinal Raymond Burke issued a call this morning for the Catholic faithful to “work for the consecration of Russia to the Immaculate Heart of Mary.”

Cardinal Burke, who is one of the four Cardinals who have asked Pope Francis for a clarification of Amoris Laetitia, made his appeal at the Rome Life Forum, in the month of the centenary of Our Lady of Fatima’s first apparition to the three shepherd children.

Burke is the former prefect of the Apostolic Signatura and current Patron of the Sovereign Military Order of Malta.

In a comprehensive address on “The Secret of Fatima and a New Evangelization,” Cardinal Burke, in the presence of fellow dubia Cardinal Carlo Caffarra, outspoken Kazakhstan Bishop Athanasius Schneider and over 100 life and family leaders from 20 nations, said that the triumph of the Immaculate Heart would mean much more than the ending of world wars, and the physical calamities that Our Lady of Fatima predicted.

“As horrible as are the physical chastisements associated with man’s disobedient rebellion before God, infinitely more horrible are the spiritual chastisements for they have to do with the fruit of grievous sin: eternal death,” he said.

He expressed agreement with one of the foremost Fatima scholars, Frère Michel de la Sainte Trinité, who said that the promised triumph of the Immaculate Heart of Mary undoubtedly refers firstly to “the victory of the Faith, which will put an end to the time of apostasy, and the great shortcomings of the Church’s pastors.”

Turning to the current situation in the Church in light of Our Lady of Fatima’s revelations, Burke said:

The teaching of the Faith in its integrity and with courage is the heart of the office of the Church’s pastors: the Roman Pontiff, the Bishops in communion with the See of Peter, and their principal co-workers, the priests. For that reason, the Third Secret is directed, with particular force, to those who exercise the pastoral office in the Church. Their failure to teach the faith, in fidelity to the Church’s constant teaching and practice, whether through a superficial, confused or even worldly approach, and their silence endangers mortally, in the deepest spiritual sense, the very souls for whom they have been consecrated to care spiritually. The poisonous fruits of the failure of the Church’s pastors is seen in a manner of worship, of teaching and of moral discipline which is not in accord with Divine Law.

The call for the consecration of Russia is for some controversial, but Cardinal Burke addressed the reasons for his appeal simply and straightforwardly. “The requested consecration is at once a recognition of the importance which Russia continues to have in God’s plan for peace and a sign of profound love for our brothers and sisters in Russia,” he said.“

"In fact, the consecration of Russia to the Immaculate Heart of Mary did not take place, as she requested," he added.

“Certainly, Pope Saint John Paul II consecrated the world, including Russia, to the Immaculate Heart of Mary on March 25, 1984,” said Cardinal Burke. “But, today, once again, we hear the call of Our Lady of Fatima to consecrate Russia to her Immaculate Heart, in accord with her explicit instruction.” READ MORE HERE

REMNANT COMMENT: So after all of these years, "crazy" old Father Nicholas Gruner  (RIP) is proven to have been right all along.  How about that!

Don't miss The Remnant's special double issue, all about Fatima. Subscrbe to The Remnant Today!

[Comment Guidelines - Click to view]
The Remnant values the comments and input of our visitors. It’s no secret, however, that trolls exist, and trolls can do a lot of damage to a brand. Therefore, our comments are heavily monitored 24/7 by Remnant moderators around the country.  They have been instructed to remove demeaning, hostile, needlessly combative, racist, Christophobic comments, and streams not related to the storyline. Multiple comments from one person under a story are also discouraged. Capitalized sentences or comments will be removed (Internet shouting).
The Remnant comments sections are not designed for frequent personal blogging, on-going debates or theological or other disputes between commenters. Please understand that we pay our writers to defend The Remnant’s editorial positions. We thus acknowledge no moral obligation whatsoever to allow anyone and everyone to try to undermine our editorial policy and create a general nuisance on our website.  Therefore, Remnant moderators reserve the right to edit or remove comments, and comments do not necessarily represent the views of The Remnant.
back to top
Last modified on Monday, May 22, 2017
Tweet