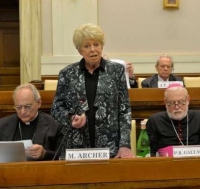 Ms. Archer, President of the Pontifical Academy of Social Sciences

ROME - The highest-ranking woman in the Vatican said Tuesday that strengthening international organizations such as the United Nations is the only way to deal with the problems of globalization, and predicted there “will be a movement to put more and more executive action” in international agencies.

Englishwoman Margaret Archer, President of the Pontifical Academy of Social Sciences, said the Church should “leave national governments where they are,” and try to influence international organizations, such as the United Nations, to try and get policies implemented aimed at “bringing out global social change.”

She said the state of national politics is “terrible.”

“They are going Brexit. They are going Frexit. Europe is breaking up,” she said, making direct reference to both the British vote in June 2016 to leave the European Union, and last week’s French presidential elections, which put two outsiders - Marine Le Pen of the nationalist, Euro-skeptic National Front, and former investment banker Emmanuel Macron, a centrist former Socialist who has founded his own party - in the final runoff.

She said the electorate had “passions of a xenophobic kind” whipped up in different areas, which increased voter turnout in areas such as northeast England.

Archer said the same thing happened in France, which saw some of the highest turnout in years.

“So people are aware that big things are happening: Leaving the EU, deserting the European vision, a new configuration of alliances between countries, but it’s not giving those people anything,” she said.

“In fact, the ones who vote for Leave [the European Union] are going to wake up and they are going to have such a shock, because it is already happening,” Archer said, “look at the rate of the pound against the dollar and against the euro … Britons are already worse off economically, they only realize it when they go on holiday, that’s the paradox.”  Under Archer’s direction - and that of the academy’s chancellor, Argentine Bishop Marcelo Sánchez Sorondo - the institution has been much more willing to take strong political stands. In 2016, it controversially invited U.S. Senator Bernie Sanders to speak at a conference at the Vatican in the middle of his presidential campaign. READ MORE HERE

REMNANT COMMENT:  Anyone who still believes the Vatican is first and foremost concerned about the salvation of souls is either deluded or in total denial. Clearly, the Church is in the hands of radical leftists who are much more interested in the New World Order than in the social Kingship of Christ.  And as we see it, the sooner practicing Catholics begin to wake up to what's really going on here the better the chances to run these imposters out of our Church.  But if we continue to pretend the Vatican is still Catholic, we're apt to end up locked up in a gulag somewhere at the recommendation of the Vatican.  The charge?  Fundamentalism and religious supremacism, of course.

The shepherds have not only abandoned the flock; they've actually joined the wolves.

By the way, get out of our Church, lady--and take your demons with you!

[Comment Guidelines - Click to view]
The Remnant values the comments and input of our visitors. It’s no secret, however, that trolls exist, and trolls can do a lot of damage to a brand. Therefore, our comments are heavily monitored 24/7 by Remnant moderators around the country.  They have been instructed to remove demeaning, hostile, needlessly combative, racist, Christophobic comments, and streams not related to the storyline. Multiple comments from one person under a story are also discouraged. Capitalized sentences or comments will be removed (Internet shouting).
The Remnant comments sections are not designed for frequent personal blogging, on-going debates or theological or other disputes between commenters. Please understand that we pay our writers to defend The Remnant’s editorial positions. We thus acknowledge no moral obligation whatsoever to allow anyone and everyone to try to undermine our editorial policy and create a general nuisance on our website.  Therefore, Remnant moderators reserve the right to edit or remove comments, and comments do not necessarily represent the views of The Remnant.
back to top
Last modified on Friday, May 5, 2017
Tweet

More in this category: « Former Head of the Knights of Malta Defies Papal Order Pope to Lead Catholics/Protestants in Anniversary Celebration of Charismatic Renewal »