Bishop de Galarreta on the SSPX “Recognition” of Vatican II 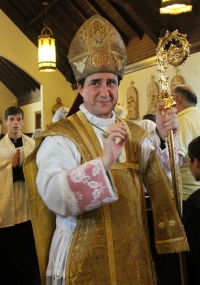 This just in from our friends at CFN regarding the semon preached at the SSPX ordinations in Winona last week: "Bishop de Galarreta alluded to today’s gestures of the Ecclesia Dei Commission concerning normalization of the SSPX wherein the Fraternity is supposedly no longer expected to accept those points of the Council the SSPX has always resisted, such as religious liberty, ecumenism and the New Mass. This new framework for normalization is what Msgr. Pozzo, head of the Ecclesia Dei commission, had related to Bishop Fellay.

"But, according to Bishop de Galarrata, 'Francis corrected Pozzo.'

"This is the first I heard of any such correction, and various priests I subsequently questioned were not aware of it either (I did not see Bishop de Galarreta after the ordination ceremony). Perhaps the bishop was referring to Pope Francis’ interview with La Croix wherein Francis said regarding the establishment of a Personal Prelature for SSPX: “That would be a possible solution but beforehand it will be necessary to establish a fundamental agreement with them. The Second Vatican Council has its value. We will advance slowly and patiently.”

"Bishop de Galarrata then commented on recent remarks from Ludwig Cardinal Müller, Prefect of the Congregation for the Doctrine of the Faith (who is the hierarchical superior of Mgr. Pozzo) wherein the Cardinal indicated that he expects the SSPX to accept Vatican II in its totality. "READ JOHN VENNARI'S ARTICLE HERE

REMNANT COMMENT: Is the Bishop suggesting that the normalization of the SSPX may not be quite as imminent as it had appeared to be some weeks ago? We look forward to reading the entire transcript, once it is released by the SSPX.

And lest Bishop de Galarrata's words should be deemed overly harsh by some, we would point out that they put us in mind of sentiments expressed by Archbishop Marcel Lefebvre nearly three decades ago, when the situation in Rome was not nearly as dire as it is today:

“The proposal of Cardinal Ratzinger even if you conceded to us a Bishop, even some autonomy for the bishops, even if you concede us the whole liturgy of 1962, even if you allow us to continue the seminary and the Fraternity as it is working now, we will not collaborate. It’s impossible, impossible because we work in the diametrically opposite directions. You work to the de-Christianization of society and the Church and of the human person. We work for Christianization. And so it is illogical. Rome has lost the Faith, my dear friend. Rome is in Apostasy. I do not speak empty works, only that I tell you the truth. Rome is in apostasy. You cannot have confidence in them. Rome has left the Church; they have left the Church. It’s sure, it is certain.”Listen to

The question many concerned friends of the SSPX are asking now is: What has changed since 1987 when these words were spoken, other than that that situation in Rome has become so much worse. Was Archbishop Lefebvre perhaps hasty in in 1988 and lacking in due prudence and patience, or was he right not to trust Rome farther than he could throw Rome? That is the question, I suppose, on the minds of tens of thousands just now. Please pray for Bishops de Galarrata, Fellay and the entire Society of St. Pius X which just now if faced with potentially history-changing decisions.