Amazon Secretly Nixes "1984" from Kindle (What Does This Have To Do With The Remnant?) 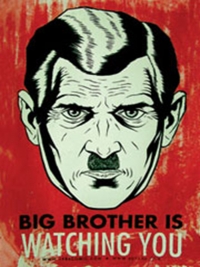 This from i09.gizmodo.com: "Thousands of people last week discovered that Amazon had quietly removed electronic copies of George Orwell's 1984 from their Kindle e-book readers. In the process, Amazon revealed how easy censorship will be in the Kindle age.

"In this case, the mass e-book removals were motivated by copyright . A company called MobileReference, who did not own the copyrights to the books 1984 and Animal Farm, uploaded both books to the Kindle store and started selling them. When the rights owner heard about this, they contacted Amazon and asked that the e-books be removed. And Amazon decided to erase them not just from the store, but from all the Kindles where they'd been downloaded. Amazon operators used the Kindle wireless network, called WhisperNet, to quietly delete the books from people's devices and refund them the money they'd paid.

"An uproar followed, with outraged customers pointing out the irony that Amazon was deleting copies of a novel about a fascist media state that constantly alters history by changing digital records of what has happened." READ ARTICLE HERE

REMNANT COMMENT: This story was sent to us by a Remnant subscriber who attached the simple note: "Michael: Please keep The Remnant on paper."  Indeed, maintaining The Remnant's print-edition is an extremely costly and time-consuming endeavor. In fact, it is hands down the most expensive arm of our apostolate, and makes little sense from a modern business model point of view.

But, as we see it, The Remnant needs to do two things: Take into account those who as a matter of principle avoid the Internet (especially older readers who prefer newsprint), and also anticipate an uncertain future on the Internet in which all things Christian may well become illegal hate speech. We have no intention of placing our ability to communicate with the worldwide remnant and to defend the Christian family and the Kingship of Christ entirely in the hands of the lords of the Internet, whoever or whatever they might be now or in the future.

Please pray for us, that we will be able to maintain The Remnant in both its print- and e-edition.  And if you have not yet subscribed to The Remnant, please help us by doing so today:

[Comment Guidelines - Click to view]
The Remnant values the comments and input of our visitors. It’s no secret, however, that trolls exist, and trolls can do a lot of damage to a brand. Therefore, our comments are heavily monitored 24/7 by Remnant moderators around the country.  They have been instructed to remove demeaning, hostile, needlessly combative, racist, Christophobic comments, and streams not related to the storyline. Multiple comments from one person under a story are also discouraged. Capitalized sentences or comments will be removed (Internet shouting).
The Remnant comments sections are not designed for frequent personal blogging, on-going debates or theological or other disputes between commenters. Please understand that we pay our writers to defend The Remnant’s editorial positions. We thus acknowledge no moral obligation whatsoever to allow anyone and everyone to try to undermine our editorial policy and create a general nuisance on our website.  Therefore, Remnant moderators reserve the right to edit or remove comments, and comments do not necessarily represent the views of The Remnant.
back to top
Last modified on Monday, June 6, 2016
Tweet