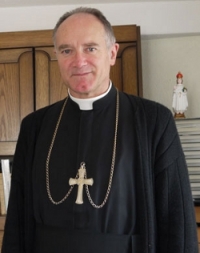 "Bishop Fellay did not have an opportunity to meet Pope Francis since the Holy Father’s election in March 2013, other than exchanging very brief salutations at Domus Sanctae Marthae, on December 13, 2013 (see DICI no. 296 of 5-16-2014). However, some priests of the Society were previously received by the Supreme Pontiff, regarding certain administrative difficulties in the Society’s District of Argentina (see DICI no 314 of 4-24-2015).

"Pope Francis had wanted a private and informal meeting, without the formality of an official audience. It lasted 40 minutes and took place under a cordial atmosphere. After the meeting, it was decided that the current exchanges would continue. The canonical status of the Society was not directly addressed, Pope Francis and Bishop Fellay having determined that these exchanges ought to continue without haste."  READ MORE

REMNANT COMMENT: Strange times, indeed. What's in this 'regularization' for the Vatican? That, of course, is the question on the minds of many of us. What are the chances that Pope Francis earnestly desires to officially install an order of traditional Catholic priests in the heart and bosom of the mainstream Church, to go on offering principled criticism and resistance to his agenda? And if he does not desire this, why does he evidently desire to regularize the Society of St. Pius X, thus 'legitimizing' his most organized opposition?

We'll have to wait and see, and while many of us are apprehensive over the prospect of the largest traditional Catholic priestly society in the world being somehow co-opted by a Vatican steeped in moral and theological turmoil, it remains obvious that prayers are needed, that we cannot rule out the grace of God in any of this, and that even if this is some Machiavellian scheme on the part of the Vatican, God is still in charge of His Church.

We have confidence that Bishop Fellay understands what is at stake and will do nothing to intentionally harm the cause of Tradition and restoration. He thus requires our prayers, not our rush to judgment.  What is abundantly clear at this point, thanks to the tireless efforts of Bishop Fellay and his team, is that the SSPX is not now nor has it ever been in schism.

So what's next? Whatever happens we must remain united in our resolve to never allow anything to divide and thus conquer the traditional Catholic counterrevolution. Vatican 'traps' have failed in the past, and Vatican 'traps' will fail in the future. If that is what this is, so be it. The truth and sacred Tradition will win out in the end.

St Athanasius, Pray for us, pray for the Church.
Published in Headline News Articles

[Comment Guidelines - Click to view]
The Remnant values the comments and input of our visitors. It’s no secret, however, that trolls exist, and trolls can do a lot of damage to a brand. Therefore, our comments are heavily monitored 24/7 by Remnant moderators around the country.  They have been instructed to remove demeaning, hostile, needlessly combative, racist, Christophobic comments, and streams not related to the storyline. Multiple comments from one person under a story are also discouraged. Capitalized sentences or comments will be removed (Internet shouting).
The Remnant comments sections are not designed for frequent personal blogging, on-going debates or theological or other disputes between commenters. Please understand that we pay our writers to defend The Remnant’s editorial positions. We thus acknowledge no moral obligation whatsoever to allow anyone and everyone to try to undermine our editorial policy and create a general nuisance on our website.  Therefore, Remnant moderators reserve the right to edit or remove comments, and comments do not necessarily represent the views of The Remnant.
back to top
Last modified on Monday, April 4, 2016
Tweet

More in this category: « Longenecker's Retraction L’affair Longenecker Draws to a Merciful Conclusion »