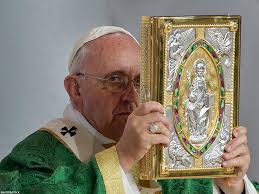 This just in from George Neumayr at The American Spectator: "The scandalous synod on the family skidded to a stop last weekend in Rome but not before Pope Francis got in a few more licks at conservatives, whom he caricatured in his final remarks as heartless.The speech was notable for its nastiness, displaying the very lack of charity he routinely assigns to conservatives. The synod, he said, had exposed “closed hearts which frequently hide even behind the Church’s teachings or good intentions, in order to sit in the chair of Moses and judge, sometimes with superiority and superficiality, difficult cases and wounded families.”

"He continued: “It was about trying to open up broader horizons, rising above conspiracy theories and blinkered viewpoints, so as to defend and spread the freedom of the children of God, and to transmit the beauty of Christian Newness, at times encrusted in a language which is archaic or simply incomprehensible.”

"Under the lightweight leftism of Pope Francis, the question “Is the Pope Catholic?” seems less and less rhetorical. Previous popes, reading the remarks above, would conclude that the speaker held to the theology of liberal Protestantism." READ ARTICLE HERE

REMNANT COMMENT: You know what? Having just returned from Rome, and knowing from on-the-ground experience how spot-on correct Mr. Neumayr is, our comment this morning is lifted right from a subsequent paragraph in this same article:

"All the tortured throat-clearing from pundits about the “nuances” of Pope Francis is very unconvincing. He is not nuanced at all. He is an open left-wing Catholic, perfectly comfortable with the de facto heretics within his own order and inside his special cabinet of cardinals. Cardinal Walter Kasper, whom Pope Francis has identified as one of his “favorite” theologians, and Cardinal Reinhard Marx of Germany, who is one of his closest advisers, stand to the left of Martin Luther.

"Well, say the pope’s desperate propagandists, Francis may not possess a deep mind but at least he has a big heart. If so, it seems to bleed for everyone but orthodox Catholics, whose fidelity to the faith under secularism’s ceaseless encroachments is treated with contempt.

Right on, Mr. Neumayr! If and when you begin to lose venues in which to publish the unvarnished truth as you've done so expertly here, please consider the columns of The Remnant wide open to you.

More in this category: « Pope Francis is Now Effectively at War with the Church What A Shocker! Pope: "All the Divorced who ask will be admitted [to Communion]" »