Rabbitgate: Could This Be a Good Thing?

Bergoglianism now veers into madness. The same Pope who saw fit to use a press conference to condemn as a reckless tempter of God a Catholic mother of eight has just received in a private audience at his residence a woman attempting to become a man through a sex-change operation and her purported “fiancée.” (One account refers to a “wife,” but the “marriage” apparently is awaiting completion of “Diego’s” “gender-reassignment” procedures.)

The Rise of Know-Nothing “Catholic” Journalism

As events make clearer by the day, Pope Francis is attempting to do at the level of the universal Church what he did as rector of the Jesuits in Argentina: impose his idiosyncratic Latin American vision of the Faith, combining dogma-free popular piety with radical progressivism—the latter undermining the former as we see with the mass defections from the Church in Argentina and throughout Latin America.

Only this explains a Pope who tells the common people to be on guard against the deceptions of the Devil at the same time he affirms atheists, Protestants, Jews, Muslims, divorced and “remarried” Catholics and even hypothetical “gay persons” who “seek God” in their respective spiritual conditions as if there were neither a Devil to deceive them nor a Hell to punish sin. Only this explains how one and the same Pope can declare in a homily that “every Christian is called in every circumstance to live a life that is coherent with the faith he or she professes” while arguing that public adulterers should be allowed to be godparents and that their admission to Holy Communion, without renouncing their adulterous relations, is a subject worthy of serious discussion in the Church—exactly contrary to the explicit teaching of John Paul II in a landmark encyclical on marriage and family only 33 years ago.

The “Francis effect” appears to be driving Mark Shea over the edge as he doggedly stays the neo-Catholic course of defending the indefensible no matter how indefensible it becomes. Given a Pope who has just cooperated with the Abortion President to sell out the oppressed Catholics of Cuba, with thanks from both Obama and Cuba’s communist dictator, and who approved a synodal document calling for appreciation of the “positive elements” in concubinage and “valuing” the “orientation” and the “gifts and qualities” of “homosexual persons,” Shea is now faced with a growing army of messengers that have to be shot, including a few cardinals and bishops.
Published in Fetzen Fliegen
Tagged under
Read more...

The Remnant's Man of the Year 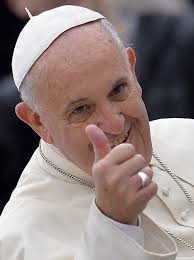 The Mysticism of Encounter and Yet Another Papal Message of Nothingness

Back in November, Pope Francis issued an Apostolic Letter concerning the Year of Consecrated Life he had called for, which began on November 30. At this point in the Bergoglian pontificate it should come as no surprise that this Apostolic Letter on consecrated life says nothing of any substance about consecrated life, but that it does advance the ideology of Bergoglianism, whose essence, as set forth in Evangelii Gaudium, is derogation of “structures which give us a false sense of security… rules which make us harsh judges… habits which make us feel safe” in favor of “the promptings of the Holy Spirit who helps us together to read the signs of the times…” (Evangelii Gaudium, nn. 14, 49). In other words, a form of illuminism quite alien to the Catholic notion of ecclesiastical tradition as the incommutable, organically developed and handed-down embodiment of apostolic tradition—in fact, the real result of the “promptings of the Holy Spirit” throughout the history of the Church.

The same interview was also posted on the Vatican website as one of the Pope’s speeches, removed from the site, posted again in multiple language versions and then removed again. Defying all efforts by neo-Catholic apologists to explain away the many appalling statements Scalfari attributed to Francis, the Pope has had the interview republished definitively in book form by the Vatican publishing house, along with other interviews and conversations with journalists, Scalfari included.
Published in Remnant Articles
Tagged under
Read more...

“Climbing the ladder of Love?”

Here is what’s in store for the “conservative Novus Ordo” parish in the midst of what the media are now hailing as “the Francis Revolution.”  It is a sermon by Father Jay Scott Newman, pastor of Saint Mary’s Church in Greenville, SC, considered among the most conservative Novus Ordo parishes in the South. (See October 12, 2014 sermon)

Father Newman (beginning at 12:00) declares that “the same-sex couple, in asking for marriage from our courts, are seeking to make the gift of self to another, a gift that gives meaning to our lives” and that they are “climbing the ladder of love” because they are making a “gift of self, however imperfectly.”   He recommends that as “missionaries” we ask same-sex couples “to climb higher” on this “ladder of love.” To which rung, exactly?

Pay No Attention to the Man Behind the Vortex

I first met Mike Voris at the 2012 Roman Forum Symposium at Lake Garda and then again at the Catholic Identity Conference in September of that year. On both occasions the other participants and I found him to be a regular fellow, an enjoyable companion and an intelligent observer of the current ecclesial scene who had no problem with the traditionalist position on the crisis in the Church even if, perhaps for prudential reasons, he had not embraced it entirely in public (which I can certainly understand).

Quite simply, I liked the guy. We all did. In fact, I thought I had found a new friend, if only a Nicodemus friend, as well as a valuable ally in the lay movement to restore the devastated vineyard. He even had me on his “Mic’d Up” talk show as a featured guest.

Published in Fetzen Fliegen
Tagged under
Read more...
Page 18 of 22