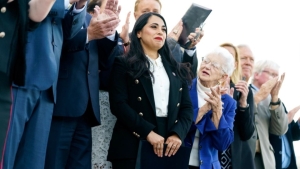 That special congressional election recently held in southern Texas along the Mexican border was just a blip on the national news’ radar, but its results have Democrats seeing red.

The election filled the seat left vacant by the retirement of Democrat Rep. Filemon Vela and was won by Mayra Flores, a 36-year-old respiratory therapist,who is no career politician.  That is only a small slice of the story that could be the initial ripple resulting in a November midterm GOP tsunami.