Who Said It: The Pope or Luther? 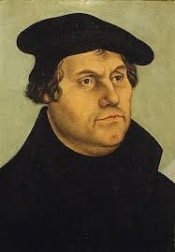 It is now time to play the game “Pope or Luther!” I will give you two quotes below. Without looking at the end notes (which give the answer) you must guess which statement was made by Pope Francis and which was made by 16th century heresiarch Martin Luther. Let us know how you did in the comments.

…Simon, in the name of the Twelve, professes his faith in Jesus as “the Christ, the Son of the living God”; and Jesus calls Simon “blessed” for his faith, recognizing in it a special gift of the Father. He says to [Simon], “You are Peter, and on this rock I will build my Church.”

Let us pause for a moment on this point, on the fact that Jesus bestows on Simon this new name, “Peter,” that in Jesus’ language [Aramaic] was “Kepha,” a word meaning “rock.” In the Bible, this name, this term, “rock,” referred to God. Jesus attributes this name to Simon not for his own personal qualities or his human merits, but on account of his genuine and firm faith, which comes from on high.

Jesus feels a great joy in His heart, because He recognizes in Simon the hand of the Father, the action of the Holy Spirit. He recognizes that God the Father has given Simon a “dependable” faith, upon which He, Jesus, can build His Church, that is, His community, that is, all of us. All of us.

Jesus intend to give live [sic] to “His” Church, a people founded not on offspring, but on faith, that is to say, on a relationship with Himself, a relationship of love and trust. Our relationship with Jesus builds the Church. And so to begin His Church Jesus needs to find in His disciples a solid faith, “dependable” faith. This is what He must confirm at this point in the journey, and this is why He asks the question.

The Lord has in mind the image of building, the image of the community as an edifice. And so, when He hears Simon’s frank profession of faith, He calls him “rock,” and makes clear His intention of building His Church on this faith.

Brothers and sisters, what happened in a unique way in Saint Peter, also takes place in every Christian who develops a sincere faith in Jesus the Christ, the Son of the living God.[i]

The Lord then says, “And I tell you, you are Peter, and on this rock will I build my church.” In St. John 1 [:42], he calls him Cephas, “You shall be called Cephas,” Keph in Hebrew, Kepha in Chaldean, and Petros or Petra in Greek…all of which mean rock… Now the Lord wants to say, “You are Peter, that is, a man of rock. For you have recognized and named the right Man, who is the true rock, as Scripture names him, Christ. On this rock, that is, on me, Christ, I will build all of my Christendom, just as you and the other disciples are built on it through my Father in heaven, who revealed it to you.”

In plain…one would say, “You say (on behalf of all) that I am the Messiah or Christ, the Son of the living God; very well then, I say to you, you are a Christian, and I shall build my church on a Christian.” For…the word “Christ” means both the Lord himself, as one sings, “Christ the Lord is risen, Christ ascended to heaven,” and he who believes in the Lord Christ, as one says, “You are a Christ.” Thus Luke in Acts… says that the disciples in Antioch were first called Christians, which is why names have survived such as, “Christians, Christendom, Christian faith,” etc. So here our Lord gives Simon, son of Jona, the name “man of rock” or “Christian” because he, from the Father, recognized the rock, or Christ, and praised him with his mouth on behalf of all the apostles.

From this it is clear enough that by the building of his church on the rock or on himself, Christ meant nothing else but (as was said above, from the apostles Peter and Paul) the common Christian faith, that whoever believes in Christ is built on this rock and will attain salvation, even against all the gates of hell…This is the simple, single, certain understanding of these words….[ii]

More in this category: « The EF vs. the OF: It’s a Question of Two Clashing Cultures The Large Family, by Pope Pius XII »