The EF vs. the OF: It’s a Question of Two Clashing Cultures

I woke up last Sunday morning with two things on my mind: my son who had just undergone surgery and the World Cup Soccer finale, but just as we were getting ready to leave for our thirty-minute trip to our Traditional parish, my wife alerted me that our son showed signs of possible complications from the surgery and needed to get to urgent care.

I knew that by taking him in we’d miss attending our beloved Traditional Latin Mass, but our son’s health did require attention and so I drove him over to the hospital. Our time there was long and all turned out well, but having been unable to enact Mass Plan A for the day my wife entertained Plan B and scoured the Internet for a later Extraordinary Form (EF) Mass in the morning that we could try to get to on time. 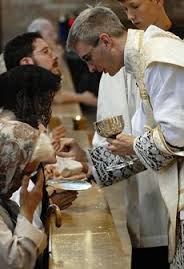 Alas she discovered none. Plan C was to find an EF evening Mass, but there wasn’t one. Thus, Plan D (‘D’ as in ‘drat’ and ‘dopey’) was needed: attending an Ordinary Form (OF) Mass. I was reticent to do so, but in the end I am pleased we did so, because it reminded me of so many amazing things about the OF culture that I had forgotten. For years after my conversion to the Catholic faith the Novus Ordo Mass was all I knew, attended, and contemplated. But now that I am a “Traddy” for life, missing my EF Mass and attending an OF Mass was enlightening vis-à-vis all the things I failed to see and took for granted.

The Novus Ordo church my wife found was miles away and I remember having attended Mass there a few years back. Our drive to the church through the rolling hills and quiet farmlands was lovely, and as we approached the city I remembered that it was very affluent. The roads leading up to the church had been recently reconstructed and were silky-smooth to drive on, and, as we neared the parking lot, I saw Lexus-loads of people trudging toward the century-old church. Funny, I didn’t remember there being a circus near the church. Gradually I came to realize that the folks in the funny hair colors, the tight and tiny tops and baggy bottoms were not part of a circus troop but rather were churchgoers on their way over to the service.

For a moment I actually hoped these people were headed to the parish center for an evening class of some kind (probably on gender equity or some such thing), but no, they kept walking through the church entrance. With eyes wincing, we entered too, but we felt so out of place with our dress clothes and chapel veils that we sat in the back.

Just as Mass was about to begin (a bit late due to the “warm-up homily”, see below), I had to take my newborn son to the back of the church to calm him down (or to calm me down). This gave me the chance to witness and relearn so many things about the OF culture.

·   I learned how pretty peoples’ ankles look during Mass – especially those of the altar servers whose lack of socks and upscale moccasins made me think holiness, while demonstrating their ardent desire to be there serving. I especially admired how middle-age men could grow so much toenail fungus. I noticed this because of the ubiquitous open-foot sandals and flip flops.

·   And how I enjoyed the pre-Mass pep talk by two “sisters” who spoke for 20 minutes from the pulpit about their mission in South America. They helped the priest, as they gave a complete treatment of the Parable of the Seed-Sower to highlight their mission. Even without their habits, I assumed they were religious sisters since they said nothing about being siblings. And I learned more about indigenous cultures than I ever learned in a high school class or about why dressing in traditional habits is important, but that’s OK because I felt so good on the inside.

·   I never knew that this parish was home to so many renowned athletes! Why, I saw a member of the World Cup champion German soccer squad and a player from the Minnesota Twins baseball team. I could tell who they were because they wore their bright jerseys to Mass and must have hustled over to church right after their games had ended. I tried to get their autographs after Mass, but, due to their athletic prowess, they dashed out the door right after taking Communion, too fast for my son and me to catch.

·   And I didn’t know this parish offered such a wonderful service to the greater community! I assumed there was a camping convention nearby because of the huge number of Mass attendees wearing cargo shorts, flip flops, wrinkly T-shirts, and ropey jewelry. Even the ushers dressed this way. While I can’t confirm this, I think they licked the S’mores off their fingers right after taking the Communion host from their hands.

·   It was also nice to see equity preserved in seating: Just as many of the faithful stood next to the rear exit door as the front one. It was nice they didn’t sit in the spacious pews because that provided the rest of us with more personal space.

·   I never knew there were so many different kinds of denim short shorts. The main aisle of the church felt like a Ralph Lauran catwalk, offering renewed meaning to the phrase “less is more.” I guess the less fabric one wears the more one can show his or her body. How quaint!

·   I was reminded that, sadly, even during an OF Holy Communion tragedy can strike—such as a fire, for example, which is what must have happened, since 25 people (I did count them) exited rapidly right after communion! The looks on their faces said it all.

·   Just before communion, Father peacefully pleaded for more EMEs (Extraneous Ministers of the Eucharist) to help him out. One lady in jean shorts bolted up out of her pew and cheered "ME, ME!" as if she’d just gotten BINGO. After she scurried up to the altar, she had to return to her pew disappointed since they’d already received enough EME help.

·   And I tell you, it was so nice to not feel obliged to receive communion. Since father had his EME Army distribute communion to the 150 parishioners, I instructed my family they wouldn’t be receiving Communion and that the ladies holding the Holy Hosts were likely safeguarding Him for later.

·   I saw a lovely young couple in the back of the church—the way back of the church, right next to the door. Their hand-holding, back rubbing and cooing made them so happy. The girl even showed the boy how to follow the Mass with the handy-dandy cheat sheet card. Funny that the card doesn’t say to leave Mass right after Communion, but they must have had to get to the pharmacy before it closed.

Other signs and wonders of merriment occurred, but the operative phrase here is “You don’t know what you got till it’s gone.” And it rings loudly. By missing our EF Mass and experiencing the dreadful OF culture, it reminded me that I ought to be more thankful for the EF Mass and that I need to participate better during it.

There have been many times when I found my mind wandering during Mass, not finishing prayers, thinking of trivial things, forgetting why I attend the Traditional Mass, and why it so vital to me and my family. We cannot take the EF for granted; we must consider how fortunate we are to have access to it, and that we must strive to spread it.

I certainly don’t mean to imply that every OF Mass culture is this way, nor that its participants are necessarily less holy. But the conflicting messages about one’s disposition, modesty and piety that are rampant at OF Masses are bad for all of us. If Mass is supposed to be where we learn about and ponder God and His 10 Commandments (not suggestions), yet are induced to contradict them while there in church, what messages do our children get? It tells them that the faith really doesn’t matter and that Christ’s redeeming death matters not, and by extension that there is no Heaven or Hell—and therefore no God. However, if our actions are consistent with the beliefs we espouse, then our kids will see that there is good and bad, Heaven and Hell, God and Satan. If we want to enter the kingdom of Heaven and take our kids there too, then we need to demonstrate this, which is what the Traditional form of the Mass engenders.

And I certainly do not say that Traddies are better or necessarily more devout. But objectively speaking, their environment is. Has anyone ever experienced the aforementioned multitudinous distractions at any EF Mass? On the whole the culture of the EF Mass lends itself to achieving a greater holiness because it calls and encourages us to outwardly demonstrate how we love God internally. Just as a sincere hug and a kiss to our spouse indicate love, when parishioners and their pastors behave in a more dignified and holy way, out of respect for the awesome Mystery of the altar, they are going to achieve greater holiness because they externally show that in their heart and mind they love God.

Published in Fetzen Fliegen
back to top
Last modified on Tuesday, August 26, 2014
Tweet
More in this category: « Karl Keating and the Lawyer’s Chisel Who Said It: The Pope or Luther? »