Our Hearts Are Breaking, Holy Father 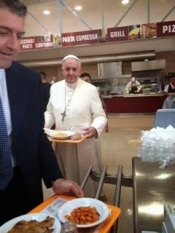 This is a recent photo of Pope Francis' impromptu visit to a workers’ cafeteria near the Vatican. What is depicted herein does not smack of heresy or even heterodoxy. Some will argue that it’s not scandalous at all, and perhaps they’re right. But if such now-routine departures from papal protocol cause some Catholic hearts to grow heavy with sadness…mine included…are we not entitled to cry out to our own father: Peter, quo vadis?

The awesome papacy of history, with its 2000-year-old legacy of loyal service to Christ our Royal King, is apparently fading away before our very eyes. Gone are the papal crowns, the royal robes, the sedia gestatoria, the kingly trappings we remember so fondly from our youth  --  and in their place stands the increasingly democratized, egalitarian “pope of the people”. It’s as if Pope is being transformed into President, and I wonder: Does any serious, practicing Catholic really want to see that happen? Do you?

Honestly, I find it disconcerting beyond words to see our Holy Father behaving like this, always with cameras clicking and whirring away.  It's not funny. To us it's disturbing and out of place. When I visit Buckingham Palace in London I want to see Queen Elizabeth look and act the part. It’s why I take the time to visit the place. I’d be mortified if Her Majesty were to show up in a pantsuit and order her own fish & chips from a street vendor. It would be crass and I would regard it as a cheap publicity stunt concocted by her less gifted media people.  And now our pope is seen practically every day distinguishing himself by an array of similar stunts, and we have no right to ask what in heaven's name is going on? 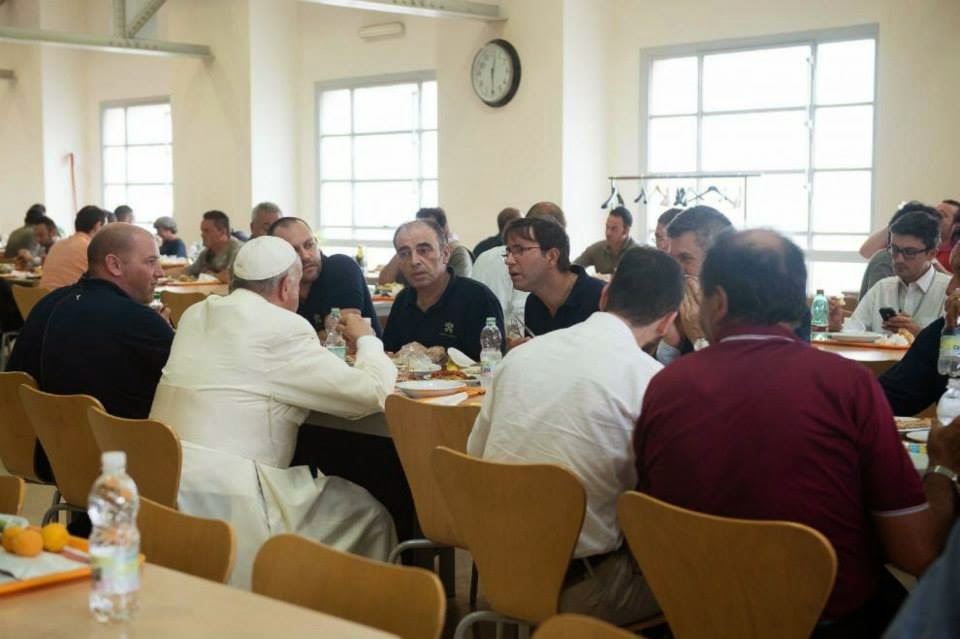 Exactly what sort of self-loathing Catholic needs to see the Successor of St. Peter, Vicar of Christ on earth, Supreme Head of the Only, Holy, Roman, Catholic and Apostolic Church “hangin' with the guys” at a popular lunch spot? I don’t get it. Why do the Pope's public relations people presume that loyal Catholics who love their Church can be counted on to hate the ancient way in which Christ and His Holy Vicar on earth were exalted before men for the past two millennia? We don’t hate it. We love it and we’re not alone. The grand papacy, the ruling monarch of the Catholic Church, the visible vicar of Christ the King on earth, his palace, his basilica, his center of power and authority on earth— to this day that is what draws millions to the Vatican each year, Catholic or not. Not democracy. Not baby-kissing. Not old shoes and tiny cars.

I don't mean to be disrespectful. Before God I wish I could see all of this as everyone else does—genuine demonstrations of Francis’s well-documented humility. But to me it seems more like an incessant media campaign designed to put distance between this pope and his predecessors. They’re trying to fashion Francis into the pope who finally got it right, better than all the rest, and I don’t see humility in that. I see a rather transparent putdown of all the Roman pontiffs back to Peter himself, in fact, and I wonder: Why are they doing this to our Church, to our Holy Father? Is it because they have uncrowned our King that they now feel compelled to uncrown His vicar?

As a lifelong cradle Catholic it breaks my heart.

Pope Pius X reportedly had reservations about some of the royal trappings of the papacy, as well. But he placed his own sensibilities to the side, knowing that the truly humble pope, following the tradition of those who came before him, wears the traditional shoes of the fisherman as they did, accepts the burden of the tiara, and ascends the throne of his predecessors not out of arrogance but out of a  profound sense of duty and respect for the exalted office, and for the good of the Church he now must serve.

It’s not about Pope Francis, in other words—it’s about Peter, the rock, and the supreme head of Christ’s Church.

How far the modern Church has fallen from any understanding of the 2000-year-old regal legacy of Peter's successors, manifested so beautifully in the prayers of the traditional Coronation Mass for a new Pope:

God, who willed your Apostle Peter to hold first place in the inner fellowship of the apostles, that universal Christianity overcome evil, look propitiously we ask on this your servant, __, who from a humble position has suddenly been enthroned with the apostles on this same principal sublimity, that just as he has been raised to this exalted dignity, so may he likewise merit to accumulate virtue; in bearing the burden of the universal church, help him, make him worthy and for thee who are blessed may merits replace vices.

And now? Good evening. Call me Jorge! And who am I to judge?

Progress? Surely this writer isn’t the only one who is sick to death of the degeneration of all things true, good and beautiful in the name of modern progress.

Published in Fetzen Fliegen
back to top
Last modified on Tuesday, August 5, 2014
Tweet