Written by  Christopher A. Ferrara
Rate this item
(38 votes) 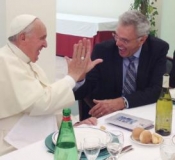 The first approach is plainly unacceptable, as it involves hypocrisy and silence in the face of worldwide scandal. The second approach appears problematical, as it would call for an endless chronicle in the traditional Catholic press that runs the risk of seeming petty: “Have you heard the latest?” But the third approach is problematical as well because many of the Pope’s publicity stunts combine elements of the grave and the absurd. For example, there was the stunt in the Vatican gardens, combining the blasphemy of “prayers for peace” by an outgoing Israeli politician and an Imam, who called for the defeat of the “infidels,” with the planting of a rather silly ceremonial olive tree. This useless theatrical gesture was followed almost immediately by an explosion of violence in the Israel-Palestine conflict that has reduced much of the Gaza strip to rubble and claimed the lives of nearly 2,000 Gazans, most of them civilians, including several hundred children.

I am opting, however, for the third approach, limiting myself to the most egregious words and deeds of this clearly out-of-control papacy. For example, there is Francis’s just-announced rehabilitation of Miguel D’Escoto, a “liberation theologian” suspended from his priestly ministry 29 years ago under John Paul II. D’Escoto received the Lenin Peace Prize, was an official of the Communist-infiltrated World Council of Churches, and served as a foreign minister in the Marxist Sandinista regime in Nicaragua. He was also President of the UN General Assembly from 2008-2009, in which capacity he gave a speech declaring that “we are all sons and daughters of Earth and that we belong to her,” calling for a “planetary civilization” that is “more respectful of Mother Earth, more inclusive of all people and with more solidarity with the poorest, which is more spiritual and full of reverence for the splendor of the universe and which is much happier.” This is the man Francis has restored to the exercise of the sacred priesthood while he approves the brutal destruction of the Franciscan Friars of the Immaculate and forbids their celebration of the traditional Latin Mass.

Then there is the Pope’s recent visit to Caserta to visit a Protestant “evangelical” minister and his collaborators, whom he called “my brothers.” In an apology published to the entire world on the Vatican website under the ludicrous title “Private Visit of the Holy Father to Caserta…” Francis publicly begged forgiveness for an obscure provision of the Italian legal code in effect during the Mussolini era which, in keeping with traditional civil law provisions in Catholic countries, prohibited the public manifestations of Protestant sects, including Pentecostals and what Americans call “Shakers” or “Holy Rollers,” meaning Protestant sectarians who like to babble, quiver and roll around on the ground. “I am the shepherd of Catholics, and I ask your forgiveness for this,” said the shepherd of Catholics who calls proselytism “solemn nonsense,” even as the Protestant ministers he calls “brothers,” precisely by proselytizing, are stealing millions of sheep from the flock Francis is supposed to be guarding.

But the loss of Catholics to evangelical sects not only does not seem to trouble Francis, but quite the contrary seems to please him. As he told his audience in Caserta during yet another of his rambling, impromptu speeches: “What does the Holy Spirit do?... The Holy Spirit makes ‘diversity’ in the Church…. He makes diversity! And truly this diversity is so rich, so beautiful. And to use the nice term of an evangelical that I love so much, a ‘reconciled diversity’ of the Holy Spirit…. [T]he truth is an encounter, an encounter between people. The truth is not made in a laboratory, it is made in life, searching for Jesus in order to find him.”

Please subscribe to The Remnant and become part of the strongest journalistic voice in defense of traditional Catholicism in the United States today. Right now our e-edition (comes out every two weeks and is exactly the same as our print edition) is availble for just $25!

The Remnant is fighting on the frontline every day, but we can't hold this ground without your help!

One must be honest and call this what it is: nonsense. There can be no “unity in diversity” without complete agreement on the truth that Christ has revealed and entrusted solely to the Church He founded on the Rock of Peter. Nor is truth “an encounter between people.” As the Oath Against Modernism declares: faith is “a genuine assent of the intellect to truth received by hearing from an external source. By this assent, because of the authority of the supremely truthful God, we believe to be true that which has been revealed and attested to by a personal God, our creator and lord.”

But the Oath Against Modernism was abandoned after Vatican II. And now we are in the midst of a pontificate whose theme seems to be the abandonment of the discrete religion of Catholicism itself, with all its bothersome particularities, in favor of a generic Christianity that would embrace anyone who calls himself a Christian, no matter what errors he professes.

What can we do but to raise our voices in protest lest our silence be seen as consent? Confirmed soldiers of Christ cannot remain silent while the very one Our Lord Himself charged to defend and protect the Faith from all compromise publicly debases it almost daily.

Published in Fetzen Fliegen
back to top
Last modified on Monday, August 4, 2014
Tweet

More in this category: « Call Him Poprah Our Hearts Are Breaking, Holy Father »