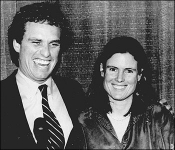 Author’s Note: Three years after we’d published the following article the Vatican did the right thing by reversing the phony annulment granted to Joseph Kennedy by the Archdiocese of Boston. This welcome news received little press coverage at the time, but the reality was that it required a Protestant (Mrs. Sheila Kennedy), screaming from the housetops over the injustice and deceit of the annulment industry in the US, to eventually cause the Vatican to intervene. This intervention came a long time ago, however—during the reign of Pope Benedict XVI--and I very much doubt we will see anything like it happen again anytime soon. Operating under the “if you can’t lick ‘em join ‘em” principle, the Vatican is now considering the alternative of simply swimming merrily along with the current by "legalizing" divorce, thus offering even more proof that the springtime of Vatican II is finally here. MJM

Excerpt taken from “American Catholic Politicians: Legates of the New Church” by Michael J. Matt (April 15, 2004 issue of The Remnant)

In her book, Shattered Faith: A Woman’s Struggle to Stop the Catholic Church from Annulling Her Marriage, Sheila Rauch Kennedy, an Episcopalian, delivered an indictment against the post-conciliar Church back in 1998 that should have caused Catholics from here to the Vatican to cringe with embarrassment. Mrs. Kennedy, readers will recall, was refusing to roll over and accept the Archdiocese of Boston’s absurd ruling that her 12-year marriage to Congressman Joseph Kennedy, the son of slain US Attorney General Robert Kennedy, was never sacramentally valid.

Though the couple had divorced after twelve years of marriage it wasn’t until Congressman Kennedy wanted to marry again that the Archdiocese had to consider yet another set of “special circumstances” for the Kennedy clan. Political expedience necessitated that the Congressman seek the cloak of legitimacy from the Church in order to help circumvent any potential roadblocks on his way to the governor’s mansion in Massachusetts that year. (Due to subsequent personal tragedy—the accidental death of Michael Kennedy in 1997—his gubernatorial bid was eventually abandoned.)

True to form, however, the Archdiocese granted the controversial annulment, much to the dismay of Mrs. Kennedy. Ironically enough, her battle against the Archdiocese’ decision—which she has since taken all the way to Rome—was as much an inadvertent defense of the Church’s pre-conciliar moral governance as it was a defense of the legitimacy of the two children which the Kennedy marriage had produced. Mrs. Kennedy was outraged by the two-faced politicking of the Church. Showing more integrity than the Archdiocese of Boston, in fact, she clarified a very simple concept which the new Church still seems incapable of grasping:

My concern was for my children’s moral development, a responsibility I felt the Church had shared with parents in the larger community for nearly two thousand years. To me, were the Church to declare my children the offspring of a marriage that had never existed, it would be abdicating its sacred and historic role to protect and promote their moral well-being.1

So, on the one hand, we now know that the Archdiocese of Boston was for decades covering up rampant sexual abuse of young men by Catholic priests, and, on the other hand, the same archdiocese had a policy which, in effect, made bastards of thousands of other Catholic children by unjustly annulling marriages willy-nilly.

Mrs. Kennedy believes in divorce, by the way. What she was decrying in her book is the hypocrisy of the post-conciliar Church, the same hypocrisy which nauseates not just traditional Catholics but a lot of outside observers as well, including a host of disillusioned wives who are the victims of “Catholic divorce”, euphemistically referred to these days as the “annulment process”—yet another spawn of Vatican II. (Ken Jones points out in his masterful Index of Leading Catholic Indicators that there were virtually no annulments in the United States in 1968. Thirty years later there were 50,498.)

The number of annulments continues to skyrocket and yet the new Church refuses to call it what it is—DIVORCE! Several heartbreaking testimonies of Catholic women victimized by the new Church’s cruel marriage annulment policy appeared in Mrs. Kennedy’s book:

All of the women I spoke with were married for more than twenty years and each is the mother of at least three children. Most were raised as traditional Catholics. The others were dedicated converts who joined the Church to share their husbands’ faith. Largely because of their strong beliefs in the Church’s teachings, they had forgone careers and defined themselves as wives and mothers. When the Church declared that the unions to which they had dedicated their lives had never existed, their faith in the institution and in themselves was shattered.2

Who could blame them? And who’s going to answer for this colossal scandal? Our progressive churchmen may call it the “annulment process” but Mrs. Kennedy, who was married in the Catholic Church, calls it “lying before God.” And, you know what? The Episcopalian is absolutely right! That’s precisely what it is:

Those seeking annulments are not encouraged to accept responsibility for their failed marriages. Rather, the Church searches for a technicality in its laws that will render the marriage invalid. The person seeking an annulment is vindicated of responsibility for the breakup of the union on the grounds that there never was a true marriage in the first place...they [the children of annulled marriages] have become the offspring of unions that never existed. For some persons, annulments require an even greater compromise in personal truth: lying before God. 3

Indeed. So even Episcopalians are recognizing the modern Church’s sellout on the indissolubility of marriage as nothing more than a cheap sham conducted by milquetoast churchmen who lack the courage to call it what it is. Even before the priest/sex scandals had hit high gear in Boston, Mrs. Kennedy was rightly pointing out that the moral authority of the Church has been squandered:

I realized that much of what they [Catholic women victimized by forced annulments] were saying was not about how things used to be but about their fears for the future. Many saw their church, the entity they had once trusted above all others, as one more institution that had abandoned traditional values for short-term gain and social convenience. They saw a future in which their children would be unable to rely on the Church either as a moral beacon within their communities or as a source of comfort in a family crisis. And they felt that without moral principle or truth, there would be no trust, and that without trust, a community and a family would break down. 4

At nearly every level the post-conciliar Church has signed a treaty of surrender to the world, her only condition being that she retains the right to change the nomenclature as she sees fit. More than anything, the Spirit of Vatican II is so abominably lukewarm! It is neither hot nor cold but shivers along in tepid mediocrity, earning for the Church the disgust of those within and outside her walls.

In 1998, an utterly scandalized Mrs. Kennedy wrote that Boston’s marriage tribunal granted the annulment on the grounds that her husband lacked “due discretion.” “In other words,” she mockingly observes, “at the time of our marriage, Joe had suffered from a lack of due discretion of such magnitude that he was incapable of marriage and therefore our union had never been valid.”

Apparently, Joe found that “adequate discretion” a little later on when, even before his annulment proceedings had been completed, he went ahead and married a cute, little member of his staff.

As for the Archdiocese, well, sadly, who would expect anything more from that fun house? Things only got worse after that, you’ll recall. After Cardinal Law had finally been offered his attractive “redundancy package” for his part in covering up the largest, sickest priest scandal in history, a new sheriff came to town. With his plastic six-guns a’blazin’, Archbishop Sean O’Malley issued a statement about pro-choice, “Catholic” politicians receiving Communion that pretty much says it all. Get a load of this timber-shivering proclamation:

A Catholic politician who holds a public, pro-choice position should not be receiving Communion. However, the Church presumes each person is receiving in good faith. It is not our policy to deny Communion. It is up to the individual.

Published in Fetzen Fliegen
back to top
Last modified on Monday, July 28, 2014
Tweet

More in this category: « Men of Iron: Another Portrait of the Preconciliar Catholic Priest What's With the Pope's New Bracelet? (A Quick Question from Michael Matt) »