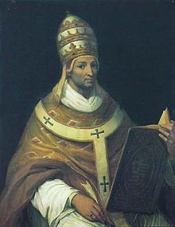 The post-Conciliar era has been a time of great confusion in the Church. This is largely due to popes saying and doing things contrary to Catholic Tradition. The result has been a true crisis. Like every crisis, there have been a variety of reactions from the faithful and the clergy.

In order to sort out the best Catholic response to such a crisis, it often helps to look back at history. Sometimes one can find historical situations in the Church similar to our own. We can then take a look at how the Catholic faithful and clergy responded to a crisis in their own time to see if there are any parallels to our own day.

In this way we can discern what the proper course should be to lead us out of the crisis. The advantage of looking back is that we can see the means by which everything was resolved. Hindsight, as they say, is 20/20.

Who was Pope John XXII?

Pope John XXII was the second of the Avignon popes who reigned from 1316 to 1334. Pope John was a good administrator and held a keen interest in world affairs. He was also the pope who canonized the great Thomas Aquinas in 1323.

For our purposes, however, the most interesting part of Pope John’s life was his last few years on earth. To elucidate what occurred during these years, I will quote extensively from an excellent article on the topic entitled John XXII and the Beatific Vision. This article was written by Fr. Victor Francis O’Daniel, O.P. and published in The Catholic University Bulletin in 1912.

A Crisis is Born

I will let Fr. O’Daniel set the stage:

…About the year 1330, disturbing reports began to be circulated abroad through the intellectual centers of Europe that the Pope was teaching or favoring a strange and erroneous doctrine concerning the state of the souls of the just after death. It was said he held that souls departing this life and needing not to pass through the cleansing fires of purgatory, and those that had already been so purified, would not be permitted to cross the threshold of heaven, or admitted to the beatific vision, before the day of the finaljudgment; that before then they would enjoy, it is true, some foretaste of the heavenly bliss, some fruit of their merits, but not until after the resurrection and the re-union of body and soul would they receive the full measure of the supernatural reward which consists in what the apostle calls the full and  direct vision of God.

To relate this story to our own time, it might be useful for us to imagine some of our Neo-Catholic[i] media and apologetic friends living in this time period. Upon hearing ordinary Catholics spreading the stories mentioned in the quote above, the Neo-Catholic personalities would no doubt balk at the mean-spiritedness of those who would dare speak of the pope in such a manner.

After all, they would tell us, nobody had yet received a confirmation from the Papal Office that these reports were true. Certainly, then, they would say it must be much ado about nothing. In any case, they would assure us that this story was certainly not news. If anything they would blame stubborn “Rad-Trads” for attempting to stir up yet another controversy against the Holy Father by spreading vague disquieting rumors.

At first there were only vague, disquieting rumors, but by the end of 1331 the theological world was rent by the certainty that the Head of the Church was really preaching against a Catholic teaching which had long been considered as practically of faith divine, the denial of which was tantamount to heresy.   On November 1, of that year, John preached before the assembled cardinals, prelates and theologians resident at the Papal Court, and numbers of the faithful, taking as his text:  "Mementote operum partum vestrorum quae fecerunt in generationibus suis." During the course of his sermon, touching upon his favorite topic of the beatific vision, he gave a thinly veiled expression of his personal opinion by declaring that the souls of the just, before the general judgment, are under the altar of God, that is to say, under the protection of the glorified humanity of Christ, and enjoying the happiness of its presence. After the day of judgment, they will be placed on the altar of God, or will be admitted to the presence of His divinity, and that of the Blessed Trinity in whose direct vision man's full and complete happiness consists.

At this point, the Neo-Catholic media would launch into full damage control mode. One can already see the headline “Did the Pope Really Preach that Souls Don’t See Beatific Vision Until General Judgment? 10 Things to Know and Share!”

After the obligatory “faulty translation” excuses (though the quote above even gave the original Latin), our Neo-Catholic apologist friends would set about reinterpreting or “fixing” poor Pope John’s unfortunate sermon for him. They would tell us that the quote above deliberately fails to employ the hermeneutic of continuity and that we must reinterpret Pope John’s analogy in the most orthodox way possible.

Thus, when John XXII says that after death, but before the general judgment, souls of the just are “under the altar of God,” our apologist friends would tell us that Pope John is simply using a metaphor. What the pope is really saying is that the souls of the just are indeed in Heaven right after death, but that the rest of the world is, in a certain sense, hidden from knowing where they are.

See Rad-Trads? Nothing to see here. Pope John is merely reiterating Traditional doctrine in a most ingenious, beautiful, and metaphoric way. At this point Neo-Catholic publishers would start selling books to help “unpack” the wisdom of Pope John’s new insight. Copies of “On the Altar of God: The Genius of Pope John” would then be sold for the medieval equivalent of $19.95 with a signed forward by Sir Scott Hahn.

Growing bolder, it would seem, and determined plainly to speak out his mind on the subject, he preached again two weeks later, November 15, before the same distinguished audience. This time he took as his text: "Gaudete in Domino semper "; and laying aside all cover of metaphor and veil of mysticism, he declared himself openly in favor of the delay of the beatific vision. His words are: “I say that the souls of the faithful departed do not enjoy that perfect or face to face vision of in which, according to St. Augustine (in Psalm xc, sermon II, No. 13), consists their full reward of justice; nor will they have that happiness until after the general judgment. When, and only when, the soul will be re-united to the body, will this perfect bliss come to man, coming to the whole man composed of body and soul, and perfecting his entire being… in  [sermons], preached at a later date, he touches on the subject obiter, always manifesting a continuance of his belief in the doctrine he had taught in them. And, in 1333, he wrote a treatise in its defence: “Queritur utrum anime sanctorum ab omnibus peccatis purgate videant divinam essentiam.""

At this point, it would finally become clear even to the most stubborn Neo-Catholic apologist that Pope John is teaching something novel. What would be their response? Embrace it, of course! One can already imagine the Neo-Catholic apologists shifting their argument as they churn out articles stating that Pope John has just put forward an amazing new “development of doctrine.”

As for the “Rad-Trad” claim that Tradition teaches the souls of the just enjoy the Beatific Vision after the particular judgment, the Neo-Catholic apologist would remind us that we are citing Tradition as it stood in 1331. They would then kindly explain that we must understand the concept of “living Tradition!”  After all, who gets to decide what is Tradition? You? Me? Surely not!

They would tell us that no one other than the Pope himself gets to authoritatively decide what is authentic Tradition. Thus, they would say that if Pope John XXII, Christ’s own vicar, says that the souls of the just don’t see the Beatific Vision until the General Judgment, we must now understand that this view is authentically Traditional.

Thus, even though the Church taught and Catholics everywhere believed that just souls see the Beatific Vision after the Particular Judgment for 1330 years, Pope John XXII would have gloriously revealed to us that this is not the case anymore.

Our Neo-Catholic apologists would tell us that we must humbly submit our intellect and wills to the mind of the Most Holy Roman Pontiff, Vicar of Christ on Earth. We should especially not dare to contradict the Holy Father on such a matter of Faith publicly; for to do so would be to spread scandal to a great many Catholics who might be in danger of losing their fragile Faith as a result.

How Did Catholics in the 1330’s Respond?

If the Neo-Catholic apologists are correct about the concept of “living Tradition”, then we should always expect to see faithful Catholics throughout history responding to every teaching of the pope with extreme docility and submission. After all, only disobedient schismatics and heretics would publicly oppose the pope, correct?

Did Catholics in the 1330’s act as our Neo-Catholic apologist friends would expect?

The news of such a doctrinal lapse on the part of the Church's Supreme Head, beginning at Avignon, rapidly spread over Christendom, everywhere causing consternation and arousing great indignation. The Catholic world was profoundly stirred. Controversies waxed strong and vehement.  Quite naturally, in Avignon, where the Papal Court resided, these were of a much less pronounced character. There, indeed, the new doctrine, possibly because of hopes of preferment, found a number of ardent supporters. On the other hand, fear of incurring papal disfavor caused its opponents to be less emphatic in their denunciations. Yet, even at the very foot of the pontifical throne, there was not wanting the strong voice of protest; for there also the old traditional doctrine, sanctified by the acceptance of ages, found able and courageous defenders. Among these the theologians of the Order of St. Dominic took decidedly a leading part.

Thus, just like in our own time, a pope espousing a novel teaching caused wide spread confusion, chaos, and frustration among Catholics. A few different camps began to develop. A few individuals supported the new doctrine for hopes of personal gain. Others were personally opposed, but very measured in their criticism out of fear of the pope. And still other opponents lead a strong and more vocal protest. This latter group included the Dominicans, who earlier in John’s papacy were his staunchest allies and defenders.

How did Pope John XXII react to such protest and chaos? Read Part II here: http://remnantnewspaper.com/web/index.php/fetzen-fliegen/item/732-how-catholic-resistance-saved-the-church-and-how-it-can-do-it-again-part-ii

[i]When I use the term Neo-Catholic in this article, I am referring to those Catholic media entities that make money off of maintaining the tragic status quo in the Church. They do this by selectively choosing not to cover news that contradicts their agenda or by filtering all Catholic news through a re-interpretive lens that protects their own interests. These media entities will go to any lengths to deny there is currently a crisis in the Church or else they will downplay its severity. I am also referring to Catholic media outlets that presume to condemn all public criticism of the pope or Vatican II. On the other hand, I am in no way referring to the large number of good, honest, and sincere conservative Catholic faithful who don’t consider themselves Traditional, but yet are doing the best they can to live an authentic Catholic life during the current crisis.

Published in Fetzen Fliegen
back to top
Last modified on Tuesday, June 17, 2014
Tweet

More in this category: « Trouble in Neo-Catholic Wonderland St. Pius X Misunderstood? Only by Vatican Committees »