The Valley of Thoughts and Prayers 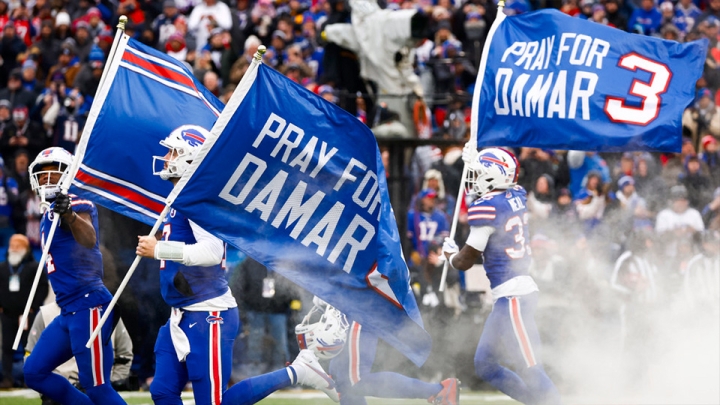 First thoughts were what Dr. Peter McCullough, a renowned cardiologist, wrote about how many cardiac arrest cases are the result of vaccine-induced myocarditis. “A million young Americans could have sustained heart damage from the COVID-19 vaccinations. Some will be at risk for cardiac arrest and future heart failure with the highest risk group being males aged 18-24.”

When Hamlin collapsed for many there was only one response: prayer. Suddenly prayer was vogue without any cultural provocation. Players took a knee for something other than token wokeism and humbled themselves, praying. There are some NFL players who pray at the end of every game, yet the networks dismiss them since they are not taking a knee to disrespect the stars and stripes.

Fans from both teams would then gather and hold a prayer vigil outside the University of Cincinnati Medical Center where Hamlin was hospitalized.

This was a far cry from last June when heated debates filled the Supreme Court that ruled how a Washington state high-school football coach was wrongly fired for praying after games with his team.

Former quarterback and ESPN analyst Dan Orlovsky prayed during his program as his two fellow broadcasters joined in with countless others doing the same.  It was notable that the first response of most was to commune with God.

This was a far cry from last June when heated debates filled the Supreme Court that ruled how a Washington state high-school football coach was wrongly fired for praying after games with his team. There is no issue praying publicly on an NFL field when death lingers, but never in a public classroom and athletic field.

The best kept secret in college football is the invocation at the annual Army/Navy football game prayed prior to the kickoff by the chaplain from the host academy. Such an integral part of the game’s storied tradition, however, never makes the national broadcast.

Leftists want to believe that Christianity is dead. Initially, many thought the same – until that third day.  Leftists underestimate the power of prayer failing to realize that there is something much greater than any indolent Hippocratic Oath.

Throughout social media many leftists took pride in disparaging believers responding to “thoughts and prayers” with spite as post-Christian America clamors for center stage. Such criticisms underscore the agnosticism of our secularized culture.

Leftists dismiss “thoughts and prayers” as strictly a rehearsed response to any crisis and nothing more than a primeval form of wishful thinking. Perhaps not enough thought goes into the prayers. What is the percentage of those who actually spend time thinking and praying? The cynic will always take the under. Well-intentioned as it may be, such sentiments have, in recent times, devolved into mocking and disparaging memes.  Sure, say your prayers, but it changes nothing.

Throughout social media many leftists took pride in disparaging believers responding to “thoughts and prayers” with spite as post-Christian America clamors for center stage. Such criticisms underscore the agnosticism of our secularized culture.  God is dismissed believing technological advances have made faith obsolete and irrelevant. Then an emergency that our human resources cannot unscramble arrives and now we need someone beyond ourselves.

Critics want something concrete and practical believing words spoken to God are insufficient.  Believers pray understanding that petitioning an omnipotent God is most rational. Prayer can empower in ways we could not do otherwise.

The shrinking American Christian majority grasps praying for others is biblically mandated and is the avenue to God’s grace.  If you are too busy to pray; you are too busy.  Second Chronicles summarizes this saying, “If my people which are called by my name, shall humble themselves, and pray, and seek my face, and turn from their wicked ways, then will I hear from heaven and will forgive their sin and will heal their land.”

For many, collective prayer is not a bunch of benign words but an expression of compassion and humility while standing in solidarity petitioning help from Divine Providence.

Upon gaining consciousness, Hamlin asked who won the game. His doctor replied, “You did, you won the game of life.”

For many, collective prayer is not a bunch of benign words but an expression of compassion and humility while standing in solidarity petitioning help from Divine Providence.

Since America seems to be in the praying mode; we need to pray for spiritual humility for our nation’s leaders to recognize our need for what only God can supply.

Perhaps this is the beginning of a much-desired great American reawakening?

After all, God works in mysterious ways.

[Comment Guidelines - Click to view]
The Remnant values the comments and input of our visitors. It’s no secret, however, that trolls exist, and trolls can do a lot of damage to a brand. Therefore, our comments are heavily monitored 24/7 by Remnant moderators around the country.  They have been instructed to remove demeaning, hostile, needlessly combative, racist, Christophobic comments, and streams not related to the storyline. Multiple comments from one person under a story are also discouraged. Capitalized sentences or comments will be removed (Internet shouting).
The Remnant comments sections are not designed for frequent personal blogging, on-going debates or theological or other disputes between commenters. Please understand that we pay our writers to defend The Remnant’s editorial positions. We thus acknowledge no moral obligation whatsoever to allow anyone and everyone to try to undermine our editorial policy and create a general nuisance on our website.  Therefore, Remnant moderators reserve the right to edit or remove comments, and comments do not necessarily represent the views of The Remnant.
back to top
Last modified on Friday, January 13, 2023
Tweet

More in this category: « Why is God, Our Loving Father, Permitting the Worsening Crisis in the Church and World? Strike Back at the Empire! »