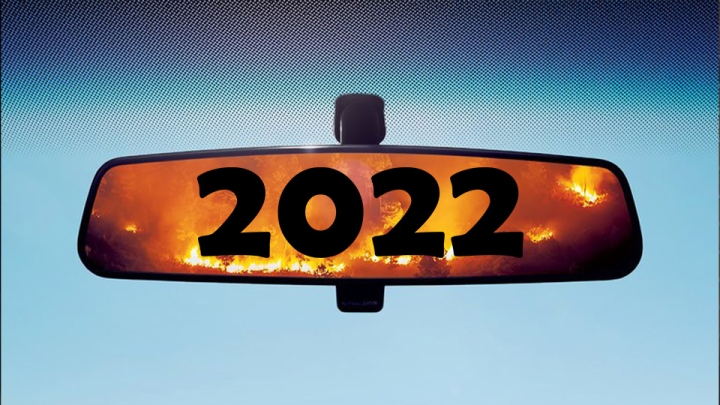 The year 2022 will be defined by record inflation, polarized politics, a sunken stock market and an overwhelmed southern border.  Yet, accolades abound and this is admittedly an incomplete list given the space presented.

Leftist hypocrisy: California Gov. Gavin Newsom vacations in Montana despite having imposed a travel ban to the Big Sky state for California state employees. Not to be outdone, after arriving and departing the World Climate Summit in Egypt aboard a fleet of private jets the Biden administration along with other Western nations are willing to pay climate reparations to the Third World while wanting you to ride your bike to work.

Favorite Babylon Bee headline:  Gov. Newsom promises there will be enough electricity for all Californians after everyone moves to Florida.

Best suggestion: Florida Gov. Ron DeSantis said those in Congress who voted for the Inflation Reduction Act should get the benefit of an IRS audit, yearly.

Are you kidding: The New York Times, the house organ for the left, named John Fetterman one of the “Most Stylish” people of 2022.

Most foreboding speech: Biden’s address at Philadelphia’s Independence Hall was ominous but not nearly as it is in the original German.

Personal foul: When Tom Brady unretired as Tampa Bay’s quarterback, he made the person who dropped $500,000 for the football of his supposedly “last career TD pass” extremely deflated.

Are you kidding: The New York Times, the house organ for the left, named John Fetterman one of the “Most Stylish” people of 2022.

Noblest assessment: Putin and Xi come across like Bond villains while Biden comes across like Maxwell Smart, only worse.

Best community service: Rita’s Bake Shop, Shamokin. After a column extolling donating blood to the American Red Cross and mentioning the appetizing baked goods that disappeared during COVID, Rita answered the call providing some of her world-class cupcakes at the next drive.

Most underrated movie: “Father Stu,” a Mark Wahlberg film. Wahlberg, who visited with cadets and midshipmen at the Army/Navy game in Philadelphia, spent millions to finance the movie, which is the true story of a boxer called to the priesthood after a motorcycle accident who inspired many. The film is the most stirring portrayal of a Catholic priest since the days of Bing Crosby and Spencer Tracy.

Bumper sticker: Are you an American or a Democrat?

Bumper sticker: Are you an American or a Democrat?

Ken Seay’s observation: When Neil Young pulled his music from Spotify over Joe Rogan’s anti-vax opinions everyone under 40 wondered who is Neil Young, while those 40 to 60 are amazed that Neil Young is still alive, and everyone over 60 was saying, what is Spotify?

Political move: Democrats shook up the presidential primary calendar when they announced South Carolina will now be first rather than Iowa. Iowa is mostly white and leads the nation in literacy and graduation rates. So, how effectively can Iowans be in picking a candidate who represents Democrats?

Worst trade: Trading five Taliban terrorists for Bo Bergdahl was difficult to overcome, but Biden did so when he exchanged a man who hates America for a woman who hates America. It was no trade but a ransom as Biden freed the notorious Russian arms dealer the “Merchant of Death,” Viktor Bout for WNBA player, Brittney Griner.  Remaining in a Russian jail cell is Marine Corps veteran Paul Whelan. Then again, Biden has a history of leaving Marines behind.

To honor the memory of my longtime friend and Marine veteran who, along with his son, gave his life in the defense of their home during Hurricane Sandy in Staten Island, the tenth annual John Filipowicz Award has multiple winners:  The Very Rev. Mykola Ivanov, a native of Lviv, Ukraine and the former pastor of Transfiguration of Our Lord Ukrainian Catholic Church in Shamokin and Vinny Clausi, the former Northumberland County commissioner, both led a wide-ranging fundraising campaign that raised $140,000 to help orphaned Ukrainian children. Not to be excluded are all those who generously donated taking loving thy neighbor to the next level.  Rather than giving the money to a charitable organization, both men made the journey as Clausi funded their trip on his own dime with both arranging their deliveries amid the fog of war to orphanages in Ukraine.

[Comment Guidelines - Click to view]
The Remnant values the comments and input of our visitors. It’s no secret, however, that trolls exist, and trolls can do a lot of damage to a brand. Therefore, our comments are heavily monitored 24/7 by Remnant moderators around the country.  They have been instructed to remove demeaning, hostile, needlessly combative, racist, Christophobic comments, and streams not related to the storyline. Multiple comments from one person under a story are also discouraged. Capitalized sentences or comments will be removed (Internet shouting).
The Remnant comments sections are not designed for frequent personal blogging, on-going debates or theological or other disputes between commenters. Please understand that we pay our writers to defend The Remnant’s editorial positions. We thus acknowledge no moral obligation whatsoever to allow anyone and everyone to try to undermine our editorial policy and create a general nuisance on our website.  Therefore, Remnant moderators reserve the right to edit or remove comments, and comments do not necessarily represent the views of The Remnant.
back to top
Last modified on Thursday, December 29, 2022
Tweet