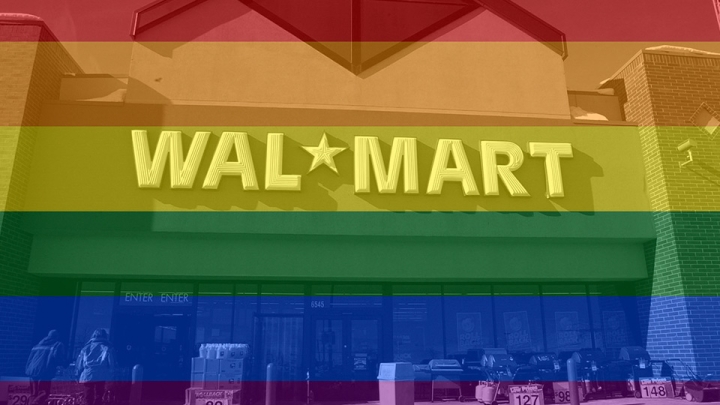 Being in the midst of the Christmas shopping season and being the informed shopper that you are it is important to realize what exactly is lurking in corporate America.

Growing up, the only “mart” box store I was familiar with was Kmart. The rise of Walmart, which opened its first store in Arkansas in 1962 with a business credo of “low prices every day,” is truly one of the greatest success stories in American history.  So much so that when George H.W. Bush was president, he awarded the Presidential Medal of Freedom to Walmart founder, Sam Walton.

As the battle over child transgenderism rages, Walton’s heirs have jumped in, adamantly opposing Arkansas’ Save Adolescents From Experimentation (SAFE) Act, which bans gender mutilation of children under 18.

The heirs of Walmart founder Sam Walton have launched a $1 million LGBTQ+ fund that opposes the protection of the health and safety of the most vulnerable – our children – that the SAFE Act supports.

The wealthiest family in the nation — the heirs of Walmart founder Sam Walton – have launched a $1 million LGBTQ+ fund that opposes the protection of the health and safety of the most vulnerable – our children – that the SAFE Act supports.

The former executive director of the American College of Pediatricians, Dr. Michelle Cretella, told The Daily Signal, “At least 11 studies demonstrate that prior to society-wide transgender propaganda, the vast majority of children with transgender belief went on to embrace their bodies and genetic sex by young adulthood. This proves that the use of puberty blockers, cross-sex hormones, and mutilating surgeries are not required for trans-believing youth to live as the transgender activists claim.”

Child abuse is the proverbial line in the sand and Walmart has crossed it. The succeeding generations of Walton’s have funneled millions into LGBTQ+ initiatives that include drag queen story hours and drag shows for children at public libraries.

Perhaps the Walmart heirs fail to realize that corporations have many patrons that not only include shareholders, but extend to their customers and employees. Walmart is at the forefront of the woke movement wanting to appear virtuous.  Corporations need to behave responsibly and focus on their business.  These CEOs preening for the woke agitators should be fired by their boards for soiling their company’s reputation, while squandering assets to advance their personal vanity initiatives.

By coddling and feeding the leftist beast, they fail to realize how it will eventually devour them.  In reality, corporate managers and military leaders parrot nostrums about diversity, inclusion, and equity that few believe.

No matter what side you support, both are customers, so corporations getting politically involved is a fool’s errand. Politicizing divides and stifles production (making for substandard effort), while losing customers (which dissolves wealth along the road to bankruptcy).  “I think I’ll keep my opinions to myself, sir,” said a young Elvis Presley when being interviewed with his manager, Colonel Tom Parker. "We’d lose half of Elvis’ record sales otherwise", said Parker.

Corporations fear criticizing China, but have no qualms berating America – the anchor and protector of their successes. Their loyalty lies solely with the almighty dollar. No profiles in courage to be found here. The more money Walmart makes, the farther down the rabbit hole of wokeness they go. If they were altruistic about social justice, they would be protesting and boycotting China. Rather, they are China’s utmost sales agent.

Government was once the chief impediment to free speech and free markets, but now its corporate America.

Government was once the chief impediment to free speech and free markets, but now its corporate America.  This is where “go woke, go broke” needs to be applied. It is hard not to shop at Walmart but there are options. Plenty of their merchandise is made in China – another reason to boycott.

Wall Street Journal columnist, Kim Strassel’s 2016 book: “The Intimidation Game,” itemizes how the left influences big corporations to do their bidding.  These corporations are less concerned with facts than with avoiding the wrath of the left. There is nothing more pathetic than an uninformed leftist corporate board member living in a woke cocoon.

Cowardice is an art among our mealy-mouthed captains of corporate America. With all the spinning Sam Walton has been doing in his grave, he must be in China by now. Perhaps the Chinese can sell Sam back to his heirs and at a preferred discount with no child drag queen show or abortion necessary.

[Comment Guidelines - Click to view]
The Remnant values the comments and input of our visitors. It’s no secret, however, that trolls exist, and trolls can do a lot of damage to a brand. Therefore, our comments are heavily monitored 24/7 by Remnant moderators around the country.  They have been instructed to remove demeaning, hostile, needlessly combative, racist, Christophobic comments, and streams not related to the storyline. Multiple comments from one person under a story are also discouraged. Capitalized sentences or comments will be removed (Internet shouting).
The Remnant comments sections are not designed for frequent personal blogging, on-going debates or theological or other disputes between commenters. Please understand that we pay our writers to defend The Remnant’s editorial positions. We thus acknowledge no moral obligation whatsoever to allow anyone and everyone to try to undermine our editorial policy and create a general nuisance on our website.  Therefore, Remnant moderators reserve the right to edit or remove comments, and comments do not necessarily represent the views of The Remnant.
back to top
Last modified on Thursday, December 8, 2022
Tweet

More in this category: « Nobody Wants This! Prayer Is Both Constitutional And Rooted In American Tradition »