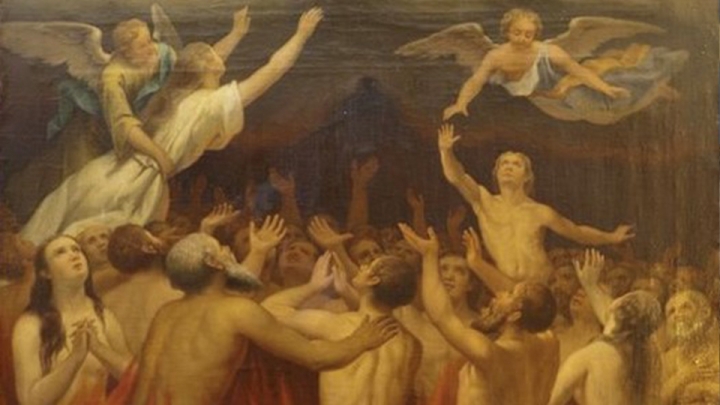 November is the Month of the Poor Souls

The title of this article alone should be enough to convey the severity of purgatory.

Far too often, we think “Oh, it’s just a venial sin, I’ll spend some time in purgatory and all will be fine.” We use this line of thinking to justify venial sins, less prayer and penance, those things which make us just a tad more worldly, and a general laxity. True, sin is bad, but I can get away with this sin, so it’s okay.

For the last project of my collegiate career, I took off a whole day before it was due just to relax. It didn’t look to be too big of a project; I figured I could do it in thirty minutes the next day. On the due date, I started work thirty minutes before the deadline, only to see that it was far more in-depth than I thought. I had other plans for that day, but I had to forego them, as I ended up working for six hours to complete this project. Thankfully, my professor still accepted it. After procrastinating on assignments, I would always tell myself “Never again,” but I guess I never got around to that, either.

This is essentially the mindset that leads to purgatory. We want to grow in holiness, but the joys of the world look pretty good too. These two things, however, cannot coexist. Because of this, along with the perfection of God, sinners cannot go to Heaven. Not only does mortal sin keep people out of Heaven, but there are also no venial sinners in Heaven. There are only former sinners who have been cleansed through the fires of purgatory.

We really are not ready for purgatory, and we offend God when we act indifferent about any kind of sin against Him.

The fires of purgatory expiate the soul’s venial sins and temporal punishment due to forgiven mortal sins. God is merciful enough that people will not go to Hell over non-deadly sins, but His justice demands that nobody can enter Heaven with sin on their soul. This shows that it is actually merciful for God to put us on fire for a limited amount of time, rather than forever. Either way, no man can enter Heaven with even the most venial of sins on his soul.

If a man were to voluntarily burn himself, even for a short amount of time, he would be put into a mental institution, because he is reckless and is not able to properly care for himself. He would be even more reckless to burn himself in a way that only the help of others could put the fire out. However, this is exactly what we do with each venial sin. It doesn’t matter that the fire isn’t eternal; it still hurts. Most importantly, it offends God, who is infinitely more worthy of our love than the fleeting pleasures of this world.

Keep in mind that even one tiny venial sin puts the soul on fire in purgatory. Even some people who far exceed our holiness had to go through purgatory. The Curé of Ars once relayed a story about a soul suffering simply for once pushing her prayers off until later in the day. We really are not ready for purgatory, and we offend God when we act indifferent about any kind of sin against Him.

When I was finishing my procrastinated project, I would’ve appreciated any help I could get. The Holy Souls in purgatory have similar sentiments. Because of this, Holy Mother the Church has assigned November as the Month of the Poor Souls, so that only they can receive indulgences during this period. Therefore, all throughout November, let us lend them our hands in prayer, and take note of their pains, that we might not have the same fate.

[Comment Guidelines - Click to view]
The Remnant values the comments and input of our visitors. It’s no secret, however, that trolls exist, and trolls can do a lot of damage to a brand. Therefore, our comments are heavily monitored 24/7 by Remnant moderators around the country.  They have been instructed to remove demeaning, hostile, needlessly combative, racist, Christophobic comments, and streams not related to the storyline. Multiple comments from one person under a story are also discouraged. Capitalized sentences or comments will be removed (Internet shouting).
The Remnant comments sections are not designed for frequent personal blogging, on-going debates or theological or other disputes between commenters. Please understand that we pay our writers to defend The Remnant’s editorial positions. We thus acknowledge no moral obligation whatsoever to allow anyone and everyone to try to undermine our editorial policy and create a general nuisance on our website.  Therefore, Remnant moderators reserve the right to edit or remove comments, and comments do not necessarily represent the views of The Remnant.
back to top
Tweet
More in this category: « Bless Me, Father, For I Am Going Trick-or-Treating Diocesan Priest: Christ the King and the Midterm Elections »