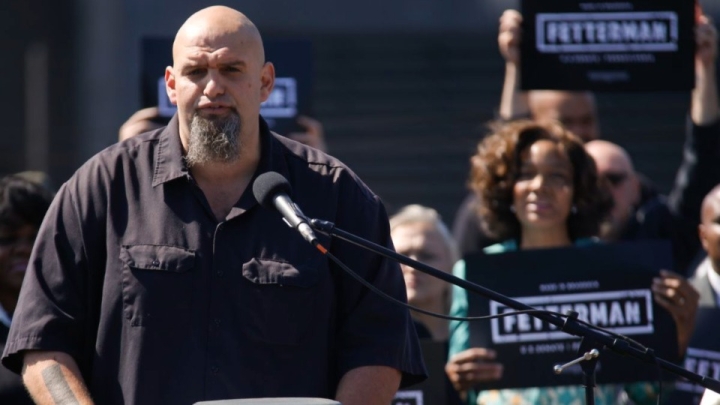 The political silly season commences Sept. 19 – the first day of mail-in ballots for the November midterm election in Pennsylvania.

No election is “silly” as control of the House and Senate hang in the balance. What is silly is the extent candidates will go in order to obtain your vote. Democrats believe the Keystone state is their best opportunity to pick up another seat and retain control of the Senate.

Since suffering a stroke days before the May primary, Pennsylvania Lt. Gov. John Fetterman, the Democrat’s senate nominee, is recovering with the help of a healthy dose of debate evasion.

The 52-year-old Fetterman, who admitted he nearly died, has yet to demonstrate the extent of his recovery that has resulted in a pacemaker and defibrillator. Consequently, his condition is more serious than what his campaign and the mainstream media portrays. Democrats will elect him regardless if he was in a wheelchair with a breathing tube down his throat and a PEG feeding tube attached to his abdomen.

A feeble democrat on the ballot for national office – where have we seen this before?

A feeble democrat on the ballot for national office – where have we seen this before?

Biden is Weekend at Bernie’s and Fetterman is the sequel. When you cross Lurch with Uncle Fester from the Addams Family you get a 6’9” Bernie Bro running for the senate in Pennsylvania.

Provided Fetterman were a Republican the media would be lamenting he must end his candidacy, while Saturday Night Live would parody him nonstop.

Any politician who suffered a stroke should want to prove they are capable to serve. Fetterman fits today’s Democrat candidate: bodily and mentally impaired – an exemplar of all that is wrong with Democrat politics. Being cognitive, physical, and able to debate are absolutes when running to become a member of the world’s most esteemed debating society.

When you cross Lurch with Uncle Fester from the Addams Family you get a 6’9” Bernie Bro running for the senate in Pennsylvania.

Fetterman’s campaign whines about Pennsylvania’s economy where he has been Lt. Gov. for nearly four years. Fetterman supports abortion up until birth, allowing transgender males to compete athletically against females, and “climate justice” whatever that is. Fetterman is also a favorite of the defund-the-police mob who is unconcerned about inflation, supports open borders and legalizing marijuana, while opposing school choice. Like most charlatans who oppose school choice, Fetterman has one of his children enrolled in private school.

Democrats today would have been called communists 40 years ago.

Fetterman’s health is horrendous, but not nearly as his politics. His controversial positions need sunlight and scrutiny. It is obvious Fetterman is suffering from lingering effects from his stroke. Fetterman has finally conceded to meet Republican Mehmet Oz in one debate. Oz was hoping for a series of debates before the mail-in ballots were sent out.  Oz’s request was not unreasonable, but to someone impaired it would be and is why Fetterman’s campaign agreed to such a late debate of October 25.

Leading candidates have to be coerced into debating, especially when a likeminded media supports them. The less voters know, the better. Debates are public job interviews. Fetterman balked as long as he could since his fundraising is strong, and he leads in the polls.

Getting elected to the Senate is not rehabilitation. Fetterman should have dropped out for his own health and for the good of the people he claims he wants to serve.

Fetterman is the Democrats’ Manchurian candidate and will be just another in a long line of Democrat wet poodles forever voting the party line.

Tatted up sporting a goatee, sweats, and a hoodie, Fetterman relishes the appearance as a Pennsylvania blue-collar tough guy from the ‘hood. Rather, he is the son of an affluent and indulgent rural York County couple. And just like Biden, he never got his hands calloused.  Fetterman needs to fool enough low information voters to win in November and according to recent polling he seems to be succeeding.

Biden proved a candidate can win despite being mentally and physically impaired, while encamped in one’s basement. Fetterman continues to run a Biden-style campaign in a decidedly anti-Biden year.  Democrats, however, vote as a pack and provided they come out to vote the Biden-style campaign will again prove successful.

Fetterman is the Democrats’ Manchurian candidate and will be just another in a long line of Democrat wet poodles forever voting the party line.

If Fetterman wins, the left’s ideological restraints on Biden will only tighten.

[Comment Guidelines - Click to view]
The Remnant values the comments and input of our visitors. It’s no secret, however, that trolls exist, and trolls can do a lot of damage to a brand. Therefore, our comments are heavily monitored 24/7 by Remnant moderators around the country.  They have been instructed to remove demeaning, hostile, needlessly combative, racist, Christophobic comments, and streams not related to the storyline. Multiple comments from one person under a story are also discouraged. Capitalized sentences or comments will be removed (Internet shouting).
The Remnant comments sections are not designed for frequent personal blogging, on-going debates or theological or other disputes between commenters. Please understand that we pay our writers to defend The Remnant’s editorial positions. We thus acknowledge no moral obligation whatsoever to allow anyone and everyone to try to undermine our editorial policy and create a general nuisance on our website.  Therefore, Remnant moderators reserve the right to edit or remove comments, and comments do not necessarily represent the views of The Remnant.
back to top
Last modified on Sunday, September 18, 2022
Tweet

More in this category: « RESIST: Michael Matt Live & On the Road GUARDIAN of TRADITION (The Trailer) »