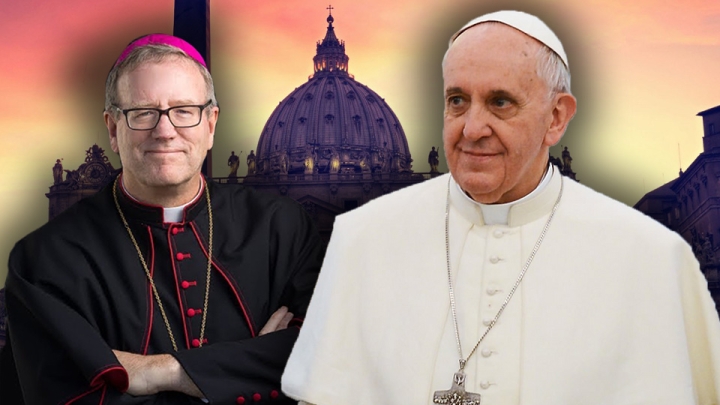 Bishop Robber Barren: Thank you for meeting with me, Your Hooliganness. I am honored to be sitting in the same place here in your private Vatican chambers where the great one recently sat.

BRB: Good one, Your Hooliganness! No, I mean Nancy Pelosi.

PF: Tell-a me, how is-a the, como se dice, “custodianship” of tradition coming along? Have you managed to apostatize all of-a America yet?

BRB: Well, um, no, Your Hooliganness. Actually, things aren’t going so well at all. In fact, just recently I did an interview with an American actor. A very famous one, and quite young. His name is Shia LaBeouf. Have you heard of him?

PF: Is he an atheist?

PF: PIIIIOOOOOOO! Aaaaaa, hooooo. OK, OK. I’m-a OK. I am-a sorry. I am-a better now. The name you just said, don’t-a say it again, please. My eyes-a roll-a back in my head whenever I hear it. And I hear-a loud screeching, and-a feel like-a Linda Blair.

BRB: I’m sorry, Your Hooliganness. Yes, the same thing happens to me. Well, this famous young actor came on the Robber Barren Show to do an interview. And do you know what happened? Do you know what he told me?

PF: He decided to become an atheist?

PF: He decided to become a transgender immigrant?

BRB: Not that either.

BRB: He converted. To Catholicism.

BRB: Yes. But that’s not all. He was converted by attending the Mass.

BRB: Not the Novus Ordo, Your Hooliganness. The Latin Mass. The real Mass. The one Padr… the one that Italian Capuchin used to do. The one you and I have been trying to kill. The one that just won’t die.

BRB: Yes, Your Hooliganness. That one.

PF: But-a it-a cannot-a be. No! So rigid. Don’t-a the young-a people want to be atheists like-a us-a old-a hippies? It’s-a like Woodstock and the Sexual Revolution never happened! It’s-a like the Second-a Vatican Council is-a being…

PF: Rejected! And for-a what? For this-a Mass, the recreation of Calvary and of-a Easter, the preparation of the food of-a angels, the intercession of-a the priest on-a behalf of-a sinful mankind! No!

BRB: The Rosary, Your Hooliganness?

PF: Yes, that-a thing! You make-a the Catholicism into an “ism,” you make it-a just-a like communism (ahh, sweet-a communism), just-a like socialism, just-a like Peronism (ahh!), just-a like Lutheranism—that’s-a what you did-a, am I-a missing something?

BRB: No, Your Hooliganness, that’s just what I tried to do.

PF: And-a you never-a failed to be pretentious, right? You talk-a down to the… como se dice, the dupes in the pews-a?

Seamless-a garment! You-a put the money in-a the basket, we-a do the rest! When you were the auxiliary bishop of Lust Engels, you-a tell them-a this?

BRB: Yes, and more, Your Hooliganness. I have missed no opportunity to disparage the Latin Mass. I have told people, for example via my smash hit outreach program “Blurbs on Flyers,” that I, Bishop Robber Barren, the Fifth Evangelist, dispense the laity from having to have any direct encounter with—oh, drat, I always forget his name—right, Jesus. That’s who they meet in the Latin Mass, so, by all means, they shouldn’t go there.

PF: So what’s-a the problem? Why didn’t this-a young man Shia listen to you?

BRB: He wants the real thing!

PF: This is a disaster. Un desastre grande.

Listen here-a, Robber. We in-a big trouble. If we don’t-a nip-a this in the bud, then the Protestant-a trinket we-a throw at the basket-fillers and call the “Novus Ordo mass” is-a finished. If-a we have-a lost the young people, then my Lord-a and-a Master no gonna be a happy-a camper.

This-a guy Shia, he-a no want to be a transgender immigrant? He want the Latin Mass instead? That’s-a it for us if that’s-a so. We are just-a old hippies a-teetering into-a the sunset.

And I have to go-a excommunicate Shia LaBeouf!

Nice-a talking to you, Robber! See you at-a the Novus Ordo later this-a afternoon! Pachamama be with you!

BRB: And also with you, Your Hooliganness.

[Comment Guidelines - Click to view]
The Remnant values the comments and input of our visitors. It’s no secret, however, that trolls exist, and trolls can do a lot of damage to a brand. Therefore, our comments are heavily monitored 24/7 by Remnant moderators around the country.  They have been instructed to remove demeaning, hostile, needlessly combative, racist, Christophobic comments, and streams not related to the storyline. Multiple comments from one person under a story are also discouraged. Capitalized sentences or comments will be removed (Internet shouting).
The Remnant comments sections are not designed for frequent personal blogging, on-going debates or theological or other disputes between commenters. Please understand that we pay our writers to defend The Remnant’s editorial positions. We thus acknowledge no moral obligation whatsoever to allow anyone and everyone to try to undermine our editorial policy and create a general nuisance on our website.  Therefore, Remnant moderators reserve the right to edit or remove comments, and comments do not necessarily represent the views of The Remnant.
back to top
Last modified on Wednesday, September 14, 2022
Tweet