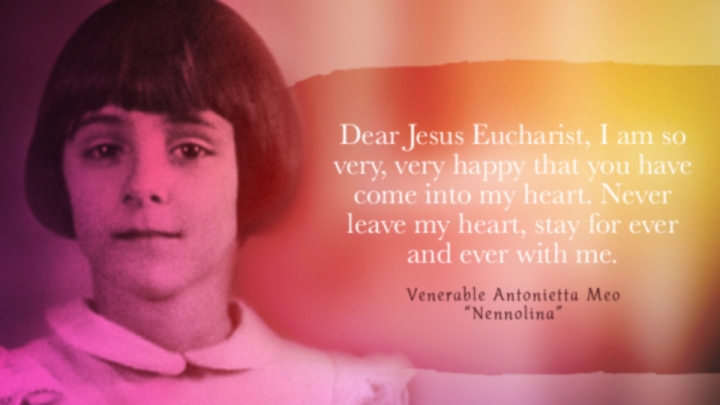 Antonietta Meo, affectionately known as Nennolina, was born in Rome on December 15, 1930, and died when she was only six years old, on July 3rd, 1937. It may be hard to imagine that a six-year-old child would be declared Venerable by the Church, but Pope Benedict XVI did so in 2007, extolling her heroic virtues. This honor was made possible when the Sacred Congregation for the Causes of Saints declared, in 1981, that even young children are capable of heroic virtue.  If canonized, she would become the youngest non-martyr Saint of the Church.

She was born to a devout family, and her parish church was “The Basilica of the Holy Cross in Jerusalem,” one of the Seven Pilgrim Churches of Rome.  It houses pieces of the True Cross and two thorns from Crown of Thorns, among many other sacred relics.  It now also contains the tomb of Venerable Antonietta Meo.

Nennolina was a happy and playful child. When she was four, her parents noticed a lump on her knee, and attributed it to a simple fall, but the swelling would not go away.  It was eventually diagnosed as an aggressive cancer of the bone, and her left leg was amputated when she was only five years old.  She was outfitted with an artificial leg and was soon back playing with her friends.  Although in pain, she remained cheerful.

It's simple not to suffer: don't think of your pain, but think of Jesus', because He suffered so much for us that you won't feel anything yourself.  - Nennolina

The power of God’s grace was evident in the way she accepted her suffering.  When her father asked her if she was in pain, she reportedly answered: “Daddy, pain is like fabric, the stronger it is, the more value it has.”  One day she said to her mother: "When I suffer, I immediately think of Jesus so I don't suffer anymore! It's simple not to suffer: don't think of your pain, but think of Jesus', because He suffered so much for us that you won't feel anything yourself."

While it is remarkable that a six year-old child has been acknowledged as Venerable by the Church, it is equally extraordinary to learn that a young child could write letters such as the one below, addressed to the Holy Trinity.  In this letter, written with childlike simplicity, she prays to each member of the Holy Trinity individually and familiarly.  She speaks of sacrifices in reparation for sins, spiritual Communion, Calvary and the Cross, the Blessed Sacrament, sanctification of her body and soul, prayers for the pope and the Church, and more.  And it is only one of over 160 that have been preserved.  She wrote them while suffering from the painful metastasis of cancer through much of her body.

respect as it should be said. Dear God the Father I ask Your forgiveness for all these sins that I

have committed, Dear God the Father I want to make many sacrifices to make reparation for all

the sins that on this day are committed dear God the Father and forgive many many sinners,

make is so repentent the come into Paradise to glorify the Most Holy Trinity.

Dear Jesus, I can’t come to receive you sacramentally every day in my heart, but come at least

Dear Jesus, I want to be always always on calvary beneath Your cross and also want to be Your

lamp that burns day and night before the Most Blessed Sacrament of the altar. Dear Jesus I

Dear Holy Spirit, You who are the love that unites the Father to the Son Sanctify my body and

my soul and make me come soon into Paradise. Dear Holy Spirit, You who are the Spirit of love

inflame my heart with love for Jesus.

and make it so one day I can come into Paradise.

Dear Most Holy Trinity, Bless the Church the Pope the Clergy my family and all the world.

Greetings and kisses from Your dear

Shortly after Nennolina wrote her final letter, Professor Aminta Milani, the chief physician of Pope Pius XI, came to examine her at the request of her doctor.  The professor spoke with Antonietta and was astonished that she could endure such pain without complaining.  Her parents told him about the letters she had been writing, and at his request they provided him with the most recent one, which her mother had crumpled up and thrown into a drawer because she was so upset at seeing her daughter suffer so much and so close to death.

The Pope was very moved upon reading the child’s letter to the Crucified Jesus.

On the next day an auto from the Vatican stopped at their house, and a personal messenger from the Holy Father greeted the family and imparted the apostolic blessing upon Nennolina.  He related that the Pope had been very moved upon reading the child’s letter to the Crucified Jesus.  He also gave them a note from Professor Milani, in which he asked the dying girl to remember him in her prayers.

Following is the text of this letter:

I really wish You well and I love You so much.

Dear Jesus. Thanks that You have sent me this illness because it’s a way to arrive in Paradise.

Dear Jesus, tell God the Father that I love Him so much, Him too. Dear Jesus, I want to be Your

lamp and Your lilly dear Jesus, dear Jesus give me the strength necessary to stand the pains that

I offer for sinners [at this moment she was taken to vomiting].

Dear Jesus, tell the Holy Spirit to illuminate me with love and fill me with His seven gifts.

Dear Jesus, tell the Madonnina that I love her so much and that I want to be with her on

Calvary because I want to be Your victim of love dear Jesus.

Dear Jesus, I entrust to you my Spiritual Father, and do for him all the graces necessary.

Dear Jesus, I entrust to you my parents and Margherita [her sister].

Dear Jesus, I send you lots of greetings and kisses.

In 1944 Our Lord spoke to a mystic about Nennolina.  He said that this little child, who had barely reached the age of reason, now, in heaven, “...possesses an intelligence and a knowledge not at all inferior to those of the most-learned and long-lived of the mystical doctors.”  St. John the Evangelist, “...who died at the age of one hundred, after having known the highest mysteries of God; Paul, the scholarly Apostle; Thomas the angelic doctor and […] all the giants of true knowledge, cannot add light to that Little One, my saint."

“The Holy Spirit, whose precocious bride she was on earth, taught her in embraces of fire what He does not teach to the proud humanly learned, and in uniting her to Himself in this blessed Country […] He infused into this Little One the perfection of knowledge, just as He infuses it into adults and the learned.”  [Maria Valtorta, The Notebooks 1944, p. 357.]

Less than a month later Nennolina herself appeared to Maria Valtorta while she was at prayer in the early morning hours of July 5, 1944.  As background, it is necessary to know that Italy was in the midst of the Second World War, and Valtorta had been forced to leave her own home in Viareggio due to a mandatory evacuation. She was bedridden with a number of serious ailments, but did not want to take the risk of asking the German Command for an ambulance; consequently she was placed as comfortably as possible on the back seat of an automobile. For eight months, she was obliged to take refuge with some others in the small Hamlet of St. Andrea di Compito, where she had a room in the home of a married couple. Infirm and in pain, she was extremely unhappy there, especially since she was left without her spiritual director.

One evening, at 3 a.m. while crying desolately,  she began to pray.  “Afterwards I made my usual offerings.  And when I came to the one for Nennolina, I said to her ‘Nennolina, give it yourself to Jesus and tell Him to have me go back to my house.  If you say so, He will listen to you...and you can understand – you that were so sick – what what the suffering of an infirm woman means.’”

Antonietta (Nennolina) then appeared to Maria, dressed in white, with “...her thoughtful, shining eyes, smiling and luminous, with a sash of light at her side, in the place where the big wound was.”

“Is it you?” Maria asked, and Nennolina replied with the smile of a happy girl.  Maria asked her if she was happy, and the girl smiled once more.

Maria then asked about her leg.  Nennolina now gave a spoken answer: “It’s no longer of use.  Here, where I am, nothing is of use any longer.  Love is enough.” And then she pirouetted half-way around with the act proper to a girl, laughing all the while.

Maria: “Do you love me, Nennolina?”  The reply: a smile of assent.

Maria: “Remember to tell Jesus that poor Maria has only Him and hopes in Him alone.”

With a farewell smile, “...the figure dissolved into light.”

See this link to read all of the letters written by Nennolina: http://www.john114.org/Antonietta/Summary.htm

[Comment Guidelines - Click to view]
The Remnant values the comments and input of our visitors. It’s no secret, however, that trolls exist, and trolls can do a lot of damage to a brand. Therefore, our comments are heavily monitored 24/7 by Remnant moderators around the country.  They have been instructed to remove demeaning, hostile, needlessly combative, racist, Christophobic comments, and streams not related to the storyline. Multiple comments from one person under a story are also discouraged. Capitalized sentences or comments will be removed (Internet shouting).
The Remnant comments sections are not designed for frequent personal blogging, on-going debates or theological or other disputes between commenters. Please understand that we pay our writers to defend The Remnant’s editorial positions. We thus acknowledge no moral obligation whatsoever to allow anyone and everyone to try to undermine our editorial policy and create a general nuisance on our website.  Therefore, Remnant moderators reserve the right to edit or remove comments, and comments do not necessarily represent the views of The Remnant.
Last modified on Saturday, September 10, 2022