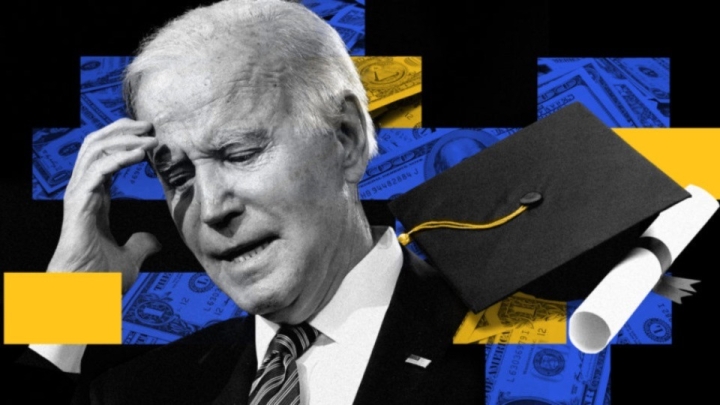 After several months of great anticipation, President Biden pulled the trigger cancelling up to $20,000 of college debt for nearly 40 million Americans worth $330 billion – conveniently before the November midterm election. Biden is also extending loan forbearance for another four months even as unemployment among college graduates is at two percent.

Biden dodged Congress that legally controls the nation’s purse strings. Biden admitted in December 2020 it was “pretty questionable” whether he had authority to cancel any debt.

Speaking at Philadelphia’s Independence Hall, Biden claimed democracy is under attack. However, it was Biden who used the FBI to raid his political rival’s home and used the agency to quash his son’s crimes. Biden then usurps the Constitution he swore to uphold by granting loan forgiveness. In Article I, section 9, clause 7 of the Constitution: “No Money shall be drawn from the Treasury, but in Consequence of Appropriations made by Law; and a regular Statement and Account of the Receipts and Expenditures of all public Money shall be published from time to time.”

The Biden bailout is political bribery paying off the college-industrial complex – the Democrats’ most ideologically avowed electorate.

According to the Office of the General Counsel, a president “does not have the statutory authority to provide mass cancelation, compromise, discharge, or forgiveness of student loan principal balances, and/or to materially modify the repayment amounts or terms thereof.” House Speaker Nancy Pelosi agreed. Pelosi did however instruct her husband that when he has the urge to imbibe – he should load up on student loans.

The Biden bailout is political bribery paying off the college-industrial complex – the Democrats’ most ideologically avowed electorate. Providing taxpayer monies to finance a private enterprise underscores the widespread contempt the D.C. bureaucratic swamp has for the American taxpayer.

Adding insult to injury, the Committee for a Responsible Federal Budget said canceling student debt will add to inflation and undermine the Inflation Reduction Act and add nearly a half-trillion dollars to the deficit.

The federal government took over student-loans in 2010 under the Obama administration claiming it would turn a profit of $68 billion. Such a canard was on par with Obama’s infamous “If you like the doctor you have, you can keep your doctor.  The only change you’ll see are falling costs…” Instead, billions were lost as tuition increased.

Pouring roughly half trillion dollars of gasoline on the inflationary fire that is already burning is reckless.

Jason Furman, one of Obama’s economic advisers, tweeted: “Pouring roughly half trillion dollars of gasoline on the inflationary fire that is already burning is reckless.”

Loan forgiveness punishes those who did the right thing and incentivizes those who didn’t. Uncle Sam will pick the taxpayers’ pockets and in particular those who paid off their loans who now will pay twice.

The term “saddled with debt” is quite misleading. It’s as if people were forced to take on debt to pursue meaningless degrees. No need for responsible behavior because the socialistic nanny state has got your back.

Former Secretary of Defense Robert Gates said Biden had been on the wrong side of every major issue for the last 40 years. That has now stretched to half a century.

Taxpayers should not be beholden to anyone’s debt, period. Congress needs to legislate that colleges pay for any outstanding federal loans which, in turn, would incentivize them to keep tuition reasonable and assist graduates in finding suitable employment. Too many colleges are nothing but a hedge fund with a school attached. Minus true reform, loan-forgiveness is just another Democrat socialist push on the nation’s future.

A decade ago, former Secretary of Defense Robert Gates said Biden had been on the wrong side of every major issue for the last 40 years. That has now stretched to half a century.  Biden and the Democrats are spending your tax dollars to buy votes for the November midterm election.

Republicans need to galvanize voters in November’s upcoming midterm election in reforming government-backed loans that got us into this mess. If not, academia will keep raising tuition, and students will have incentive to take out more loans.

This is not loan forgiveness, but debt transfer from the tax paying working class to the future class of entitlement seekers cultivated by Democrats.

How’s that for social justice?

Many folks do not comprehend Constitutional government. There is a reason schools prefer to teach Critical Race Theory rather than civics.

If this does not get your attention, what will?

[Comment Guidelines - Click to view]
The Remnant values the comments and input of our visitors. It’s no secret, however, that trolls exist, and trolls can do a lot of damage to a brand. Therefore, our comments are heavily monitored 24/7 by Remnant moderators around the country.  They have been instructed to remove demeaning, hostile, needlessly combative, racist, Christophobic comments, and streams not related to the storyline. Multiple comments from one person under a story are also discouraged. Capitalized sentences or comments will be removed (Internet shouting).
The Remnant comments sections are not designed for frequent personal blogging, on-going debates or theological or other disputes between commenters. Please understand that we pay our writers to defend The Remnant’s editorial positions. We thus acknowledge no moral obligation whatsoever to allow anyone and everyone to try to undermine our editorial policy and create a general nuisance on our website.  Therefore, Remnant moderators reserve the right to edit or remove comments, and comments do not necessarily represent the views of The Remnant.
back to top
Last modified on Thursday, September 8, 2022
Tweet

More in this category: « POPE FRANCIS: All His Friends in Global Places Nennolina’s Letters »