TWO WEEKS to FLATTEN the ECONOMY: A Tribute To Anthony Fauci 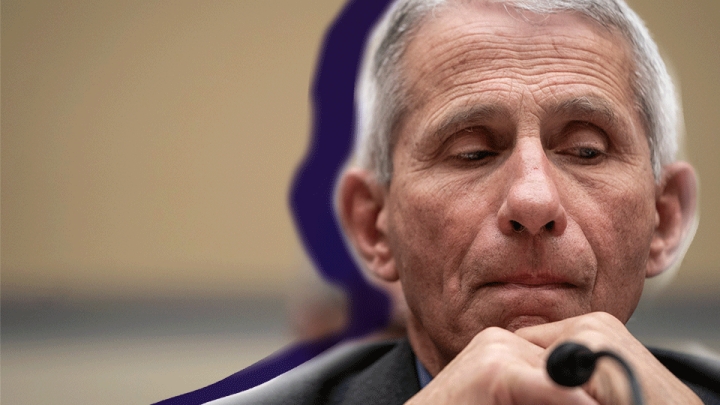 Dr. Anthony Fauci, who announced his retirement last week, has been compared to Dr. Mengele, Chief Medical Officer at Auschwitz. This is a gross insult to Dr. Mengele. He only killed a couple of thousand; Fauci has already killed and maimed millions, and he's not finished yet. And while Mengele may actually have healed one or two people before WW II, when he worked as a legitimate doctor, Fauci has done nothing but commit one atrocity after another since the beginning of his career. But don't take my word for it; read Robert F. Kennedy Junior's The Real Anthony Fauci.

If we're to compare Fauci with anyone, then the only person of similar stature would be the Fuhrer himself. For not only has Fauci been responsible for the deaths of millions of perfectly innocent non-combatants, but he has devastated the economies of the decadent and multicultural West in a way that would have put a smile on the Fuhrer's lips. Fauci has effectively carpet-bombed the economies of Europe and North America in a way that Goering and his Luftwaffe could never have achieved without the assistance of nuclear weapons. So impressive is the destruction that, had the Fuhrer been alive today, he would surely have awarded Herr Fauci the Iron Cross, First and Second Class. There would certainly have been a massive retirement banquet for him at the Reichstag.

Indeed, completely unprovoked, in March 2020 Herr Fauci launched a War of Extermination against the entire world.

But, true to his eugenicist-Nazi credentials, Fauci did not confine his efforts during the first year of the “War against COVID” to wrecking the Western economies; he also busied himself in eliminating hundreds of thousands of the frail and elderly, the “useless eaters,” Hitler's unnutze Esser. These were terminated in euthanasia centers (previously known as “hospitals”) by means of lethal injections of Rendizivir, as well as deprivation of treatements that actually worked, such as Ivermectin, hydroxychloriquine, Vitamin D3, zinc, and Vitamin C. And it was not just the “useless eaters” of the West that the good doctor had in his sights: Indeed, completely unprovoked, in March 2020 Herr Fauci launched a War of Extermination against the entire world.

Not just decadent Westerners, but the more virile peoples of the world – black, brown and yellow-skinned peoples – were in Fauci's sights. Through his Ministry of Propaganda at the CDC, he weaponized a seasonal 'flu, tarting it up as a Grim Reaper on a par with the Bubonic Plague, and used this as an excuse to shelve all action against the real grim reapers in Africa, Asia, and Latin America – cholera, typhoid, tuberculosis, etc – in favor of stopping said 'flu. The result, as the UN reported in May 2020, was that millions would die of those diseases.

No doubt the good doctor was rubbing his little hands with glee in his bunker at this announcement. But Herr Fauci was not finished; indeed, he was only getting started. The mass imprisonment of millions of healthy people – described by the Ministry of Propaganda as “lockdowns” - meant that the urban poor of Africa, Asia and Latin America, unable to get out onto the streets to beg or sell their trinkets, just died of starvation in their shacks or cardboard boxes. Again, the danger of this was reported by the UN in early 2020, but ignored by the Ministry of Propaganda.

But Fauci reserved his real weapon of mass destruction, his ultimate Wunderwaffe, for early 2021, when he rolled out his mRNA Death Jab.

But Fauci reserved his real weapon of mass destruction, his ultimate Wunderwaffe, for early 2021, when he rolled out his mRNA Death Jab – a kill shot which has already put him on a par (in terms of body count) with such greats as Hitler, Stalin, Genghis Khan, and Attila the Hun. He now declared total war against all of humanity. The Death Jab, as it transpired, was a killing machine like no other. For one thing, never before in history had people formed orderly queues patiently and even eagerly awaiting the instrument of their own execution. They did not, of course, know they were being executed: They imagined they were gaining immunity from a deadly killer 'flu virus – one with a 99.8% survival rate. But no matter, they knew it was the “right thing to do.” How could they doubt it? the Ministry of Propaganda (CDC) kept telling them so. It was by this means, and no other, that they could protect their granny.

The really brilliant thing about the Death Jab was, (1) That it killed people sequentially and not all at once. You might die immediately, within a day or two, or it might take months or even a year or two to do the job, and (b) That it killed by a whole variety of means, most of which could not be directly attributed to the Jab. You might die of blood clots, or cancer, or prion disease, or a whole variety of other ailments. Or, you might not be killed outright, but permanently maimed by literally one of about fifty chronic ailments. The main point was, that no one could easily prove that the Death Jab had caused their ailment or the demise of their loved one.

The Fuhrer would have been so proud of him!

For all that, facts can't be hidden forever, and, as the death-toll mounts (somehwere between 5 and 12 million by a recent estimate), Herr Fauci has decided to hang up his syringe and rest on his laurels. Well, who can blame him? He certainly worked himself to the bone over the past couple of years. We can only wish him well and a very brief retirement before the death-toll mounts into the hundreds of millions, as it may very well do over the next couple of years. The Fuhrer would have been so proud of him!

—Emmet Sweeney is the author of several works dealing with problems in the history of the ancient Near East.

[Comment Guidelines - Click to view]
The Remnant values the comments and input of our visitors. It’s no secret, however, that trolls exist, and trolls can do a lot of damage to a brand. Therefore, our comments are heavily monitored 24/7 by Remnant moderators around the country.  They have been instructed to remove demeaning, hostile, needlessly combative, racist, Christophobic comments, and streams not related to the storyline. Multiple comments from one person under a story are also discouraged. Capitalized sentences or comments will be removed (Internet shouting).
The Remnant comments sections are not designed for frequent personal blogging, on-going debates or theological or other disputes between commenters. Please understand that we pay our writers to defend The Remnant’s editorial positions. We thus acknowledge no moral obligation whatsoever to allow anyone and everyone to try to undermine our editorial policy and create a general nuisance on our website.  Therefore, Remnant moderators reserve the right to edit or remove comments, and comments do not necessarily represent the views of The Remnant.
back to top
Last modified on Wednesday, August 31, 2022
Tweet
More in this category: « THE CONVERSION OF SHIA LABEOUF: A Triumph of the Obvious POPE FRANCIS: All His Friends in Global Places »