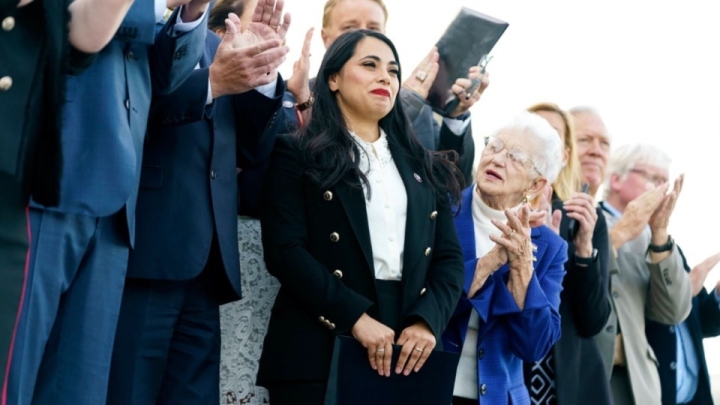 That special congressional election recently held in southern Texas along the Mexican border was just a blip on the national news’ radar, but its results have Democrats seeing red.

The election filled the seat left vacant by the retirement of Democrat Rep. Filemon Vela and was won by Mayra Flores, a 36-year-old respiratory therapist,who is no career politician.  That is only a small slice of the story that could be the initial ripple resulting in a November midterm GOP tsunami.

Flores, the first Mexican-born woman elected to Congress, is a Republican in a Congressional district that has the second-largest Hispanic population in America. Obama won the Democrat dominated district by 22.1% in 2012, while Clinton won it by 21.5% in 2016.  In 2020, Biden won the district by just 4.2%.

Democrats believe demographics is king and their open borders policy reflects that which is supposed to provide them electoral victories today and in the future. However, on election day, Flores won by a 51-43 margin, the first time Republicans claimed the seat in a century.

Flores’ campaign ran on “God, family, country” – ideals that run counter to Democrat grievance politics in their one-size-fits-all outreach to Blacks, Hispanics, and women. Democrats understand constituencies as monolithic. They believe Hispanics want unfettered immigration, just as Blacks claim to be victims, while all women demand unrestricted access to abortion.

Democrats observe abortion as sacrosanct, and their contempt for children was underscored when Speaker of the House Nancy Pelosi shoved Flores’ young daughter during a photo-op at her mother’s Congressional swearing-in ceremony.

While Democrats want nothing better than to defund the police and never miss an opportunity to malign the challenging job of the Border Patrol, they ensure Flores, who is married to a Border Patrol agent with four children and her constituents, are less safe.

Like the supremacists they are, Democrats believe they know what is best for their Black and Hispanic base provided they know and keep their place. That is why Democrats relentlessly attack Black Republicans like Clarence Thomas and shamelessly belittle their vote. Take the 2020 presidential campaign when Biden offered his racist screed, “If you have a problem figuring out if you’re for me or Trump, then you ain’t Black.”

Americans care about being able to afford the necessities and desire a growing and stable economy. They want safe streets and schools that provide education, not indoctrination.

Most Latinos prefer a hand up rather than a handout and are patriotic.  They have no time for the obsession Democrats have over gender fluidity, race, open borders, national anthem kneelers and socialism after having lived under such failed policies elsewhere. Historically, the left has always had a problem with Latinos as they do not consider themselves victims and are not afraid to work toward achieving the American dream like so many Cuban expatriates like Marco Rubio’s family.

Most Hispanics do not refer to themselves as Latinx and can define what a woman is, as opposed to the hippy, white Democrats who cannot. It is such a contrast that has them leaving the elitist Democrats that has little to do with any effective outreach by Republicans themselves. Rather, it is because of the party’s longstanding platform of faith, family and tradition.

Democrat wokeness and its liberation theology leaves most of us cold no matter what your ethnicity. Americans care about being able to afford the necessities and desire a growing and stable economy. They want safe streets and schools that provide education, not indoctrination.

Democrats need a permanent underclass, so they overreach.  Provided Democrats knew their history, they would realize their party has been on the wrong side of nearly every major issue over the past 200 years. The Democrats’ “principles” are of the Groucho Marx variety: “These are my scruples. But, if you don’t like them, I have others.”

Flores’ victory could be that proverbial train poised to steamroll over the established political order.

When will Hispanics, Blacks, Asians and Jews stop being the political football kicked around by Democrats and their allies throughout academia and the media?

Flores’s opponent in November is Democrat Rep. Vincente Gonzalez, who represents the neighboring district that, due to redistricting, has merged with her seat, which Democrats believed was safe.

Flores’ victory could be that proverbial train poised to steamroll over the established political order.  Provided it’s running on schedule, it should arrive in November and result in the Democrats political version of the Alamo.

[Comment Guidelines - Click to view]
The Remnant values the comments and input of our visitors. It’s no secret, however, that trolls exist, and trolls can do a lot of damage to a brand. Therefore, our comments are heavily monitored 24/7 by Remnant moderators around the country.  They have been instructed to remove demeaning, hostile, needlessly combative, racist, Christophobic comments, and streams not related to the storyline. Multiple comments from one person under a story are also discouraged. Capitalized sentences or comments will be removed (Internet shouting).
The Remnant comments sections are not designed for frequent personal blogging, on-going debates or theological or other disputes between commenters. Please understand that we pay our writers to defend The Remnant’s editorial positions. We thus acknowledge no moral obligation whatsoever to allow anyone and everyone to try to undermine our editorial policy and create a general nuisance on our website.  Therefore, Remnant moderators reserve the right to edit or remove comments, and comments do not necessarily represent the views of The Remnant.
back to top
Last modified on Thursday, July 14, 2022
Tweet

More in this category: « Mandatory Vaccination War: OVER All Hands on Deck: We Have to Fight Their Demonic Fire with Holy Fire »