Back to the Future with Our Lady of Good Success 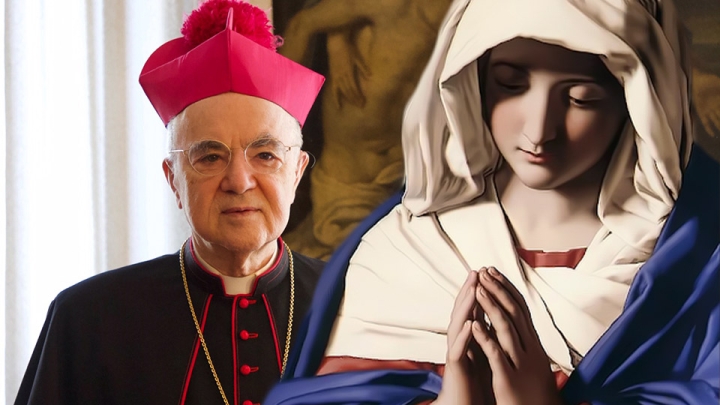 (Was the prominence of Archbishop Carlo Maria Viganò prophesized?)

In the 16th century Our Lady of Good Success opened a window into the future for Mother Mariana de Jesus Torres y Berriochoa. The purpose of Her apparitions would be for the benefit of generations far into the future. As a matter of fact, many of these events wouldn’t take place for another four centuries. Maria was given a preview of civilization in the later part of the nineteenth and early twentieth centuries. A concise picture of today’s shocking “civilization” was predicted.

Mother Mariana documented these visitations after being told virtually all of humanity will devolve becoming unwitting hostages to the devil. Our Lady of Good Success places responsibility for this incremental degeneration on a collapse of mission in religious vocations, especially priests. It’s obvious after reading this account that Satan's victory over our “modern” civilization was accomplished through a sophisticated strategy to destroy God’s attributes, especially his attribute of Order. We now live in a chaotic world, an orderless world, a civilization where peace and order only survive in tiny enclaves.

In 2018 a testimonial bomb exploded within the Catholic Church.

But why, and what should be done about this future crisis?  Our Lady of Good Success foretells:

“Pray insistently without tiring and weep with bitter tears in the secrecy of your heart, for the love of the Eucharistic Heart of my most Holy Son and His Precious Blood shed with such generosity and by the profound bitterness of His cruel passion and death He might take pity on His ministers and quickly bring to an end those ominous times, …sending to this Church a Prelate that will restore the spirit of his priests. My Most Holy Son and I will love this most favored son with the love of predilection, and we shall gift him with a rare capacity, a humility of heart, a docility to divine inspiration, the strength to defend the rights of the Church, and a tender and compassionate heart, so that like another Christ he will assist the great and small… with divine suavity, he will guide souls consecrated to the service of God…”

Who is this prelate? According to Our Lady of Good Success he now exists and, if we pray insistently in the secrecy of our hearts, he will become our remedy for this crisis in the priesthood and used to restore our One Holy Catholic and Apostolic Church.

Further Our Lady of Good Success tells us: “Into his hand the scales of the Sanctuary will be placed so everything is weighed with due measure and God will be glorified.” If this is so, then scanning the hierarchical landscape will reveal this prelate’s identity. It’s now apparent to many that there is such a one that fits the description outlined by Our Lady of Good Success. And, She did tell us, there would be just one prelate and father that will lead the Church back to its original mission. Many today believe we have our man, but Our Lady tells the reason his rescue has been delayed… “The lukewarmness of all the souls consecrated to God in the priestly and religious state will delay the coming of this prelate and father.”

We need a unified alliance before even more disaster occurs, or are we waiting for WWIII?

In 2018 a testimonial bomb exploded within the Catholic Church. A sitting Archbishop publicly arraigned dozens of bishops and cardinals and the pope himself, in a conspiracy of silent treachery. We now have a courageous prelate who named names and places from his own firsthand experience in several Church dicasteries. He has also presented to us a methodical order for restoring integrity within the clergy, insisting on the eradication of all homosexuals from the priesthood, abolishing the current documented source of ambiguity and confusion within the Church, Vatican II, courageously demanding that the current leader of this nefarious conspiracy repent and immediately resign, our current “Pope”, along with the dozens of complicit hierarchy cooperating in this evil scheme. Our hero has called for an investigation into the pope’s appointments to the College of Cardinals.

If this isn’t the prelate spoken of by Our Lady of Good Success four hundred years ago, then who is?

Now for the sad part, what’s left of our institutional Church in these small enclaves appear to be delaying the necessary reform through their tentative behavior in the face of all this. We need a unified alliance before even more disaster occurs, or are we waiting for WWIII?

Mother Mariana de Jesus was from a world far removed from ours. She became a consecrated virgin at a very early age and dedicated her life of complete service to her King, Jesus Christ and His appointed Queen of heaven and earth, Our Blessed Mother.  In a 16th century culture, though nowhere near perfect, Mariana was thoroughly shocked by a future society she was asked to sacrifice and pray so much for. Mariana founded a religious order of nuns and spent her life in Ecuador teaching her sisters how to be selfless servants of Christ and His Holy Mother.

[Comment Guidelines - Click to view]
The Remnant values the comments and input of our visitors. It’s no secret, however, that trolls exist, and trolls can do a lot of damage to a brand. Therefore, our comments are heavily monitored 24/7 by Remnant moderators around the country.  They have been instructed to remove demeaning, hostile, needlessly combative, racist, Christophobic comments, and streams not related to the storyline. Multiple comments from one person under a story are also discouraged. Capitalized sentences or comments will be removed (Internet shouting).
The Remnant comments sections are not designed for frequent personal blogging, on-going debates or theological or other disputes between commenters. Please understand that we pay our writers to defend The Remnant’s editorial positions. We thus acknowledge no moral obligation whatsoever to allow anyone and everyone to try to undermine our editorial policy and create a general nuisance on our website.  Therefore, Remnant moderators reserve the right to edit or remove comments, and comments do not necessarily represent the views of The Remnant.
back to top
Last modified on Friday, July 1, 2022
Tweet
More in this category: « The Roe vs. Wade Decision PATRIOTISM MATTERS: Pledging Allegiance to a Burning Flag »