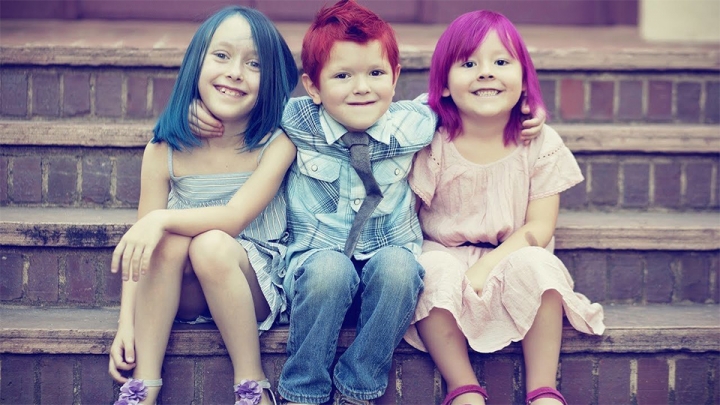 Heads up—The hair color and facial piercings are a dead give away, signaling aberrant pathology. Unfortunately, these ideological weirdos “teach” small children. As you listen to them rage-it’s evident that the radical left is engaging in a woke struggle session with children. It’s no longer clandestine-they’ve pulled back the curtain.

They are coming for your toddlers.

They are coming for your toddlers-not to teach basic ABCs, but to preach the curriculum of perversion, LGBTQIA+.

The radical LGBTQIA++++etc. lobby has infiltrated pre-school and elementary schools for the sole purpose of indoctrinating and sexually grooming very young children. There is no other reason to engage in this ghoulish behavior.

This is all about a maniacal obsession of sexualizing children, and nothing else.

The overriding goal is to flood the ranks of the hyper-sexualized LGBTQIA movement with fresh young recruits. They want young children to be as lost and confused as they are. They intend to fully populate and continually replenish the troops with radicalized, propagandized and vulnerable children—the younger, the better.

As the acronym indicates, this is all about a maniacal obsession of sexualizing children, and nothing else. Every letter in the ever-expanding acronym stands for sex of various imaginings. Don’t look for any philosophical underpinnings here. This is a raw, unadulterated, woke sexual oppressive agenda, promulgated by narcissistic wackos seeking to co-opt very young children.

Under the pretense of sex education curriculum for preschoolers, this is nothing short of radical transgender indoctrination and grooming of children.

Watch in horror as the latest maniacal revolution levels a full-throated assault on small children to deny their biology, usurp their familial attachments, and rob them of their precious developmental innocence. It’s really happening.

The radical agenda must be immediately exposed and extracted from education and entertainment.  Under the pretense of sex education curriculum for preschoolers, this is nothing short of radical transgender indoctrination and grooming of children. But it doesn’t stop there. The deviltry potions of puberty blockers and satanic rituals of genital mutilation promise permanent physical damage and psychological trauma.

Every Marxist movement coins new words, phrases, and terms and then, demands compliance by the masses.   Similarly, the LGBTQIA+++   revolution is dictating and concocting new jabberwocky words, including pronouns, to connote sexual reordering. You better use their new fan-dangled  pronouns, ze, zer, cis, or else.

The purpose of this linguistic gibberish is a form of mass psychosis which mandates that citizens, corporations and media adopt the new language, or else. What is the or else? Your LGBTQIA betters, the elite of the woke vanguard will call you a HATER, or canceled you, or fine you, or imprison you.

Disney’s stock market value dropped by $50 billion when the entertainment company increased its activism on behalf of the LGBT agenda.

The tyrants in the Marxist gender movement first demand language compliance, then demand acceptance and subservience to their woke code of conduct. Not surprisingly, children are woefully unable to maneuver this totalitarian mind field.

Libraries and publishers have bought into the woke mind control.  Children’s books, videos, games, movies, and cartoons are now deployed to introduce to innocent minds the appropriation of new pronouns to promote the LGBTQIA++++ ideology.

Have you been to the children’s section of your local library lately? You can’t miss the displays full of social justice/gender fluidity books front and center. Predictably, the children’s Bluestem Award winning books further the woke social justice/ propaganda/gender agenda. Furthermore, as evidence of the Marxist/gender fluidity alliance, the American Library Association just elected a lesbian Marxist as its President, whose goal is the “queering of libraries.”

Executives at Disney admit that its child programming engages in subliminal sexual messaging, however, there is now a concerted effort to take a more aggressive stance to undergird its entire programming operation with gender-fluidity/LGBTQIA indoctrination and normalization.  There is emerging evidence that this woke ideology is costing Disney dearly. Disney’s stock market value dropped by $50 billion when the entertainment company increased its activism on behalf of the LGBT agenda, including opposing Florida’s new anti-grooming law.

Once upon a time, society denounced and censured cross dressers, flashers, drag queens, yet now this creepiness is celebrated.

The Marxist goal behind its invention and mass marketing of  words and terms is the death of the old paradigm. New words signal a whole new way of thinking. Change the language, and you change thinking. Obscure the language and you conceal the truth.

Once upon a time, society denounced and censured cross dressers, flashers, drag queens, yet now this creepiness is celebrated as the vaunted LGBTQIA movement dress code and theatrics endowed with the respectability of protected human rights. Just attend a Gay Pride Parade for confirmation.

Well, haters, it is time to buckle up and commit to ending this madness.  We cannot turn away.

The light is shining on the darkness and we are staring into the pit of hell.

They’ve set their sights on our children.

Make no mistake this will be a battle royale for the souls of our children.

—Elizabeth Yore is an international child rights attorney. She served as General Counsel at the Illinois Department of Children and Family Services. She was General Counsel and Chief of the International Division at the National Center for Missing and Exploited Children. She appears on LifeSitenews podcast, Faith and Reason and also is a regular contributor on Steve Bannon’s WarRoom.  Her website is YoreChildren.com.

Catch the Latest at RTV — WOKE CATHOLICS: Cancelling the 10 Commandments

[Comment Guidelines - Click to view]
The Remnant values the comments and input of our visitors. It’s no secret, however, that trolls exist, and trolls can do a lot of damage to a brand. Therefore, our comments are heavily monitored 24/7 by Remnant moderators around the country.  They have been instructed to remove demeaning, hostile, needlessly combative, racist, Christophobic comments, and streams not related to the storyline. Multiple comments from one person under a story are also discouraged. Capitalized sentences or comments will be removed (Internet shouting).
The Remnant comments sections are not designed for frequent personal blogging, on-going debates or theological or other disputes between commenters. Please understand that we pay our writers to defend The Remnant’s editorial positions. We thus acknowledge no moral obligation whatsoever to allow anyone and everyone to try to undermine our editorial policy and create a general nuisance on our website.  Therefore, Remnant moderators reserve the right to edit or remove comments, and comments do not necessarily represent the views of The Remnant.
Last modified on Wednesday, April 27, 2022