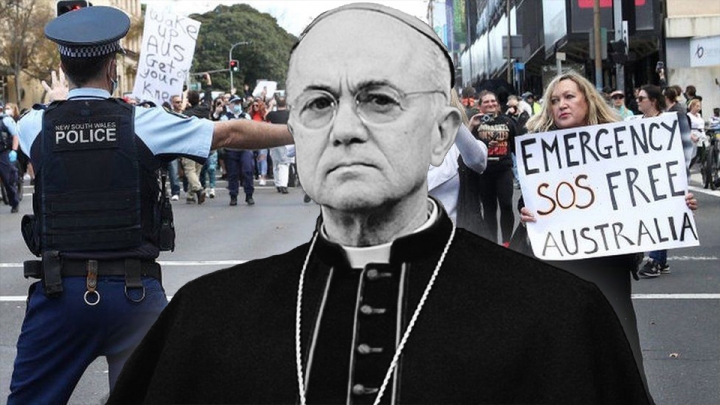 Humanity is being threatened at this moment by a global coup, by which an oligarchy of globalist criminals has succeeded in installing its exponents at the highest levels of governments and international institutions. We are not talking about a phenomenon that is limited to only one nation. It is instead a plan that extends to many nations, from Australia to Canada, from France to Italy, from Germany to Austria. The myth of democracy and human rights has today been systematically demolished by the very same people who constructed it as a dogma of modernity and progress: the will of the people is being violated, the good of individual nations is being ignored, the social and economic fabric is being destroyed, the protection of workers and of businesses is being trampled, and people’s health is being considered an obstacle to the profits of pharmaceutical companies. And just as for the last two years an emergency pandemic has been imposed that has been used to legitimize scandalous deprivations of natural rights, already they are planning new emergencies – the climate emergency, the computer emergency, the energy emergency, the war emergency – all of which are intended to aggravate and make permanent the disaster that has been provoked.

Those who govern you do not exercise power for your good, but rather to carry out the interests of this globalist elite.

You Australians are not the only ones to experience this coup, nor the only ones whose constitutional rights have been infringed upon and for whom the most fundamental principles of the Rule of Law have been denied. Those who govern you do not exercise power for your good, but rather to carry out the interests of this globalist elite: interests of an economic and ideological nature, which consist in appropriating wealth and power by means of the Great Reset, in making the population a slave to the system of social credit that has been experimented by the Chinese communist dictatorship, and in making all of you into a mass of chronically ill people whose immune systems have been destroyed by an experimental serum imposed on everyone by law. Tomorrow, under the pretext of a war, they will tell you that the increases of demand for consumer goods and the limited availability of gas makes new restrictions and new renunciations indispensable, making the masses pay for the disastrous results of their unfortunate decisions.

All this is not happening through a series of unfortunate coincidences, but rather because it is the fruit of a criminal plan that has been prepared in its tiniest details and announced by its own architects: the Agenda 2030 of the United Nations and the Great Reset of the World Economic Forum are the script imposed on governments around the world and created by the emissaries of private supra-national institutions, the majority of whom have been trained in Klaus Schwab’s “Young Leaders for Tomorrow” program. It is a subversive project which threatens world peace, the sovereignty of individual nations, and the very lives of citizens. A project that, if it had not made use of the complicity of government leaders, judges, and members of law enforcement, would have already been denounced and condemned.

The destruction of national economies is not the final goal – this destruction is only a means to an end in order to make irreversible the establishment of the New World Order.

However, we must not allow ourselves to be deceived: the destruction of national economies is not the final goal – this destruction is only a means to an end in order to make irreversible the establishment of the New World Order, which forms the premise for the coming of the Antichrist. Because what they want to do is not only appropriate control of global finances, but by means of this to have the power to decide your every action, establishing what is right and what is wrong, controlling every movement, every action, and every one of your thoughts – to make you all slaves and force you to become soulless automatons without any identity.

Behind all this, we cannot fail to recognize the infernal work of the enemy of the human race, of the one who is “a murderer from the beginning,” and who hates everything that is True, Just, and Beautiful, because he sees there a ray of the perfections of God the Creator, Lord, and Redeemer. Man has been created in the image and likeness of God, and it is precisely this divine imprint that Satan wants to cancel, extinguishing the innocent smile of the child, corrupting honesty and righteousness in people, preventing any impulse towards the Good, and promoting everything that is dishonest, sinful, vicious, and inhuman. Satan wants a world in which the death of both the body and the soul reigns, in which the gentle yoke of the Law of God and the Gospel is replaced by the odious tyranny of evil, rebellion, and hate.

The only way to hope to conquer Evil is to oppose it with Good; the only way to defeat this antichristic dictatorship is to have Christ the King reign in your life, in your work, in families and in nations.

I exhort all of you, dear Australians, to understand that this epochal battle ought to be fought in the knowledge that it is only by turning to Our Lord Jesus Christ that you will be able to defeat the Devil; that only in obedience to His Commandments will you be able to find liberty, concord and prosperity for your Homeland; that it is only where Christ reigns that His Peace can also reign. Pax Christi in regno Christi.

If you ask for freedom in order to continue offending the Lord, to violate His Law, and to blaspheme His Name, all of your protesting will be useless and doomed to failure. The only way to hope to conquer Evil is to oppose it with Good; the only way to defeat this antichristic dictatorship is to have Christ the King reign in your life, in your work, in families and in nations. And along with Christ, may you also cause Our Lady and Queen to reign, Mary Most Holy, who by the decree of Providence will trample the head of the ancient Serpent and definitively destroy the Evil One.

Place each of your actions, therefore, under the protection of Our Lord and the Immaculate Virgin, keeping yourselves in the Grace of God and praying with faith. May the beginning of Holy Lent spur all of you on, with a supernatural spirit, to offer penances, fasts, and sacrifices to implore the Divine Majesty for the peace that the world cannot give, the concord that sees us all as brothers and sisters in the shared Fatherhood of God, and the liberty that is founded on Christ, the Way, the Truth, and the Life.

May Our Lady of the Southern Cross, Help of Christians, and Saint Francis Xavier, Patrons of Australia, bless you, as I also bless you, in nomine Patris, et Filii, et Spiritus Sancti. Amen.

Watch this address below:

[Comment Guidelines - Click to view]
The Remnant values the comments and input of our visitors. It’s no secret, however, that trolls exist, and trolls can do a lot of damage to a brand. Therefore, our comments are heavily monitored 24/7 by Remnant moderators around the country.  They have been instructed to remove demeaning, hostile, needlessly combative, racist, Christophobic comments, and streams not related to the storyline. Multiple comments from one person under a story are also discouraged. Capitalized sentences or comments will be removed (Internet shouting).
The Remnant comments sections are not designed for frequent personal blogging, on-going debates or theological or other disputes between commenters. Please understand that we pay our writers to defend The Remnant’s editorial positions. We thus acknowledge no moral obligation whatsoever to allow anyone and everyone to try to undermine our editorial policy and create a general nuisance on our website.  Therefore, Remnant moderators reserve the right to edit or remove comments, and comments do not necessarily represent the views of The Remnant.
back to top
Last modified on Tuesday, March 1, 2022
Tweet

More in this category: « The Stampede of the Green Lemmings The Tragedy of Feminism »