Exclusive: Details Leaked of Francis’ July Visit to the People’s Republic of China 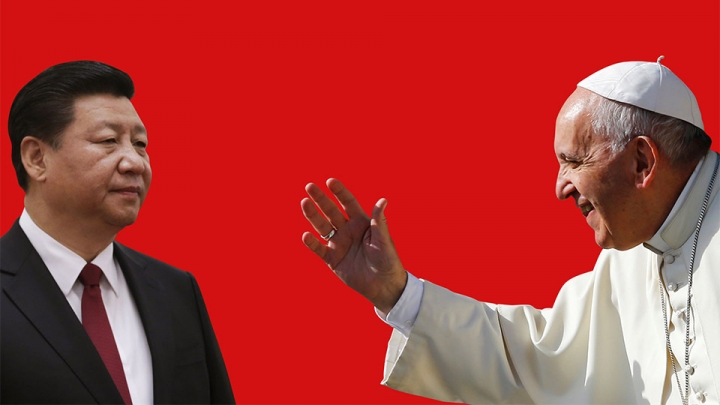 Sources exclusive to The Remnant have revealed that Pope Francis traveled to the People’s Republic of China in July, 2021 to celebrate the 100th anniversary of the founding of the Chinese Communist Party. Francis and a small, socially-distanced entourage (Fr. James Martin, Klaus Schwab, John Cena, Pachamama, and Theodore McCarrick) toured what Francis, on the plane to Beijing, called “the New Jerusalem” as the personal guests of benevolent Chinese leader Xi Jinping.

A band played “The East Is Red” as Francis descended from his plane onto the tarmac in China. Francis made the Sign of the Sickle as he gave thanks for his safe landing.

Leaked video from Francis’ visit shows the pontiff and his socially-distanced entourage taking in a wide variety of sights and events.

On July 1, for example, Pope Francis, disguised as a Red Guard, listened attentively to Xi Jinping’s speech at the gates of the Forbidden City on the importance of Christian charity.

“If anyone messes with China,” Xi declared, “they will get their heads bashed in bloody by the Great Wall of a billion and a half communists.” *

“I felt so much love, so much mercy,” Francis gushed to Schwab, disguised as Jiang Qing and sitting the prescribed two meters away. “This is truly a holy man.”

“There must be peace and harmony,” Francis pontificated. “Nightsticks keep us safe. I wish to apologize for the behavior of Catholics in Hong Kong who prioritized the Church over nightsticks. I feel so much rigidity from the Catholics here. So much attachment to the little ceremony we perform on Sundays. (Or used to perform, before the horrible CIA coronavirus caused us to close down the superfluous buildings where we once had our meetings.) What is needed is more encounter, more dialogue!”

Francis also spent the day at a former soup kitchen in Hong Kong run by former nuns who now distribute free condoms and coronavirus vaccines to the city’s poor while working night jobs as bouncers.

Francis refused to meet with Hong Kong’s Cardinal Zen, citing a busy schedule. Francis did, however, meet with Catholics imprisoned in the dungeon beneath the communist police station in Kowloon. There, Francis delivered a fervorino designed to raise the spirits of those in prison for their faith.

“Why must there be walls?” Schwab wailed. “So much hate in the world, so much division. Why can’t all societies be as welcoming as communist China?”

The prisoners are said to have listened in rapt attention to this wisdom.

“Dungeons are also bad for the environment. The beatings cause too much exhalation of carbon dioxide. And I am told there is no access to CNN. It seems also there is mold here, which accelerates global warming. You must think of others, not only of yourself. Lastly, this dungeon has entirely too many walls. Walls are not Christian! You must not rely on these walls. You must seek dialogue!”

The next day, Pope Francis, disguised as Klaus Schwab, visited the Great Wall of China with Xi Jinping. Xi explained that the Great Wall had been built by the Manchus and Mongolians to hurt the feelings of the Chinese people.

Klaus Schwab, disguised as Francis, silently wept against a guard tower. “Why must there be walls?” Schwab wailed. “So much hate in the world, so much division. Why can’t all societies be as welcoming as communist China?”

Francis, disguised as Tony Fauci, later visited Wuhan with Pachamama, disguised as Jen Psaki. At the Wuhan Institute of Virology, Francis spoke briefly about the true origins of the coronavirus pandemic: the CIA’s secret plot to smuggle the virus into China in the baggage of members of the US military in Wuhan for an athletic event.

“My old friend Castro once got the CIA treatment,” Francis, as Fauci, portentously whispered to the Bat Lady. “I know what they’re capable of! Please keep up the good work. We’ll ixnay the ocuments-day about the unding-fay, if you know what I mean.”

Francis brushed away a tear, blubbering, “It is just like in my home country! So much love for the communists!”

Pachamama blessed the Wuhan Institute of Virology and also bit the head off of a bat there as part of a sacred Amazonian ritual. Francis held her feather headdress while she performed this traditional rite.

“So much encounter!” Francis, as Fauci, gushed.

While in Wuhan, Francis/Fauci and Pachamama/Psaki met with Cui Qingqi, soon to be ordained bishop under the terms of the Vatican-Beijing deal brokered by Theodore McCarrick. In keeping with a precedent started by “Saint” John Paul II of happy memory, Francis joined Cui in kissing a copy of the Little Red Book.

“St. Paul went on a long march, too!” Cui reminded Francis. “Unlike St. Paul, though, Mao increased the grain harvest by an astounding one million percent in just eleven days back in 1959. Christian mythmaking is great and all, but it has its limits. What people really want is bread alone.”

Francis brushed away a tear, blubbering, “It is just like in my home country! So much love for the communists!”

On the final day of the historic visit, the entire socially-distanced entourage stopped by Tiananmen Square, where CIA operatives had released a democracy virus in 1989. Pope Francis, disguised as Dianne Feinstein, bellowed into a bullhorn about the awful wrongs which the Americans had done on June 4 more than thirty years before.

The final evening of the visit was taken up by a Chippendales performance given by a special troupe called The McCarricks.

“I remember the CIA operative with the two plastic bags filled with the horse dewormer Ivermectin,” Francis harangued, gaudy earrings swinging from his earlobes in a very Feinsteinian way. “He was a victim of Republican propaganda! He was trying to convince the friendly tank drivers to avoid the vaccine. The tank drivers were there to perform an act of love! It is so sad. So much rigidity on the part of those who will not let tanks into squares. Our Lord tells us, ‘Be ye vaccinated!’ Also, ‘Give tanks! Give way to tanks!’ I wash my hands of this!”

The crowd assembled in Tiananmen and held at gunpoint for the pope’s historic haranguing applauded instantaneously and rapturously.

The final evening of the visit was taken up by a Chippendales performance given by a special troupe called The McCarricks. Among the dancers were several seminarians very familiar to Uncle Ted. Fr. James Martin was seen furiously scribbling his cell phone number on ten-yuan bills.

On the plane ride home, Bono, decked out in peach-toned sunglasses and a Mao suit, gave an incomprehensible interview about the Raelians and Nelson Mandela. Francis, speaking to a reporter from l’Osservatore Romano, chided Taiwan for “division and disunity,” issuing a spontaneous motu proprio, scribbled on the back of the little cocktail napkin you get in coach, to the effect that Taiwan must either join the more powerful People’s Republic or face ostracism.

“Division must not be tolerated,” Francis intoned. “For the sake of unity, all must gather under the iron fist. Those Taiwanese [and here John Cena apologized profusely for Francis’ use of the word ‘Taiwan’] are causing so much discord by refusing to get with the program. Beijing has custody of Chinese tradition now. Our Lord says that the burden of Xi is light. His yoke is a blessing. So obey!”

* In the spirit of the Allium Cepa News Network… Not much to laugh about these days. But I think we have to laugh at something or we’ll go nuts. By the way, the Xi quote is actually almost verbatim: https://www.msn.com/en-us/news/world/heads-bashed-bloody-china-s-xi-marks-communist-party-centenary-with-strong-words-for-adversaries/ar-AALEsfT

[Comment Guidelines - Click to view]
The Remnant values the comments and input of our visitors. It’s no secret, however, that trolls exist, and trolls can do a lot of damage to a brand. Therefore, our comments are heavily monitored 24/7 by Remnant moderators around the country.  They have been instructed to remove demeaning, hostile, needlessly combative, racist, Christophobic comments, and streams not related to the storyline. Multiple comments from one person under a story are also discouraged. Capitalized sentences or comments will be removed (Internet shouting).
The Remnant comments sections are not designed for frequent personal blogging, on-going debates or theological or other disputes between commenters. Please understand that we pay our writers to defend The Remnant’s editorial positions. We thus acknowledge no moral obligation whatsoever to allow anyone and everyone to try to undermine our editorial policy and create a general nuisance on our website.  Therefore, Remnant moderators reserve the right to edit or remove comments, and comments do not necessarily represent the views of The Remnant.
back to top
Last modified on Friday, September 10, 2021
Tweet

More in this category: « Joe Dumbkirk and the Afghanistan Disaster VACCINES: Covidian “Baptism” of a New Political Religion? »