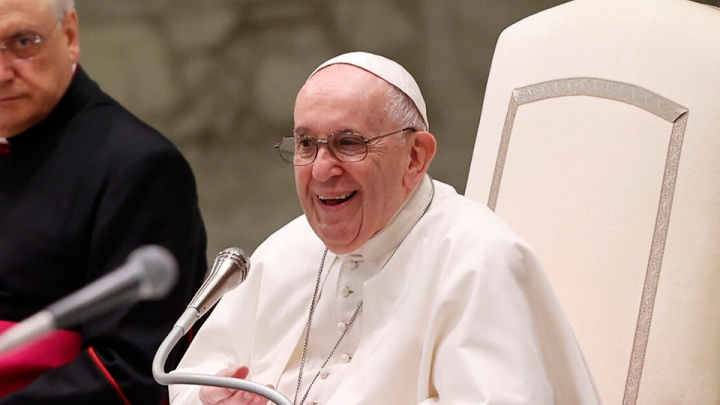 The pontiff went on to say, “And let us not be afraid to be truthful, to speak the truth, to hear the truth, to conform ourselves to the truth, so we can love. A hypocrite does not know how to love. To act otherwise means jeopardizing the unity of the Church, that unity for which the Lord Himself prayed.”

Hypocritical is a successor of St. Peter who disregards Sacred Scripture.

When it comes to preaching on the subject of hypocrisy, Pope Francis should be considered a sage.

Hypocritical is a successor of St. Peter who disregards Sacred Scripture.

Concerning the Ten Commandments, Pope Francis said, “I observe them, but not as absolutes.”

The modern Catechism of the Catholic Church (CCC 2056) states that the Ten Commandments, “were written with the finger of God” and goes on to say, “They are pre-eminently the words of God.”

Hypocrisy is the Holy Father’s complete disregard for the presence and power of the Holy Eucharist.

Apparently the catechism doesn’t matter much to the pontiff. It seems he embraces the Protestant theory that so long as you have accepted Jesus as your “personal” Lord and Savior, you’ll be just fine.

Hypocrisy is the Holy Father’s complete disregard for the presence and power of the Holy Eucharist.

The modern Catechism of the Catholic Church (1324-1327) states that the Eucharist is, “the source and summit" of the Christian life. Yet during the height of a global pandemic, when the faithful urgently needed the healing presence of the Divine Physician in the Eucharist, the bishop of Rome suggested that masses be suspended and adoration chapels closed.

St. Clare defended her convent against an attack by holding up a ciborium, but when faced with a pandemic, the pope retreated into self-quarantine.

Hypocritical is a pope who encourages vaccination without regard for the unborn, while discouraging religious exemptions.

Hypocritical is a pope who encourages vaccination without regard for the unborn, while discouraging religious exemptions.

The Holy Father went so far as to declare it “morally acceptable for Catholics to receive COVID-19 vaccines, including those based on research that used cells derived from aborted fetuses.”

Adding insult to injury, while many of the faithful were deprived of the Easter Vigil due the pontiff’s pandemic paranoia, Pope Francis used Holy Saturday to welcome a bus load of so-called “transgender” individuals to the Vatican to receive the COVID-19 vaccine. In his own words, “the vaccines are safe, effective and an ‘act of love.’”

Hypocrisy is accepting homosexuality as a mentally sound behavior, while suggesting that seminarians who embrace tradition are unstable.

Hypocrisy is accepting homosexuality as a mentally sound behavior, while suggesting that seminarians who embrace tradition (which he refers to as “rigidity”) are unstable.

“If they accept the Lord and have goodwill, who am I to judge them,” the pope said of homosexuals.

“When I find a rigid seminarian or young priest, I say ‘something bad is happening to this one on the inside.’ Behind every rigidity, there is a serious problem, because rigidity lacks humanity.”

Hypocritical is a shepherd who plans to travel to Scotland for an environmental summit but due to his hectic schedule cannot offer even one public mass for the flock.

Hypocritical is a shepherd who plans to travel to Scotland for an environmental summit but due to his hectic schedule cannot offer even one public mass for the flock.

On November 1st, as the Church commemorates All Saints Day, the Holy Father won’t be able to offer the Holy Sacrifice of the Mass for the Scottish people. He will be too busy rubbing elbows with John Kerry, Prince Charles, Greta Thunberg, and other individuals identified by the United Nations as “world leaders.”

Hypocrisy is a pontiff who cares more about Mother Earth than Mother Church.

As if desecrating the Vatican Gardens with a pagan Pachamama ceremony were not sufficiently offensive, Jorge Bergoglio has made no effort to hide the fact that he is more pagan than pontifical.

As he prepares to consult with Greta Thunberg in Scotland, it’s important to remember that the pope welcomed Chelsea Clinton, Deepak Chopra, Cindy Crawford, Anthony Fauci, and Jane Goodall to the Vatican as keynote speakers for a conference on “exploring the mind, body, and soul.”

His ‘tree-huggin’ Holiness has even suggested that the outbreak of the coronavirus may have been one of "nature's responses" to people around the world ignoring the harsh consequences of climate change.

Hypocrisy is a pontiff who cares more about Mother Earth than Mother Church.

While Pope Francis promotes a pagan doctrine that covid was the earth’s way of demanding atonement, Msgr. Nicola Bux provides a more Catholic observation - one which should prompt the Roman pontiff to pause for an examination of conscience. The former consulter to the Congregation for the Doctrine of the Faith suggested that the sins of the Church and the sins of the world may have been a subtle nudge from God for atonement. Bux invoked the words of Genesis, saying the current sins of humanity "cry out to Heaven for vengeance."

During a speech at the Pontifical Catholic University of Ecuador the pope said, “One thing is certain: we can no longer turn our backs on reality, on our brothers and sisters, on Mother Earth.”

Based on the words and deeds he has exhibited during his pontificate and culminating with Traditionis custodes, Pope Francis has essentially said: vaccines matter, the earth matters, UN leaders matter, homosexuals matter, globalist agendas matter, interreligious dialogue matters. However, “rigid” Catholics, who embrace tradition, do not matter.

During his August 25th general audience, the holy father said that a hypocrite does not know how to love and damages Church unity.

Jeremy Dannebohm is a freelance writer and traditional Catholic. All too acquainted with controversy and attacks, Dannebohm is quick to defend those disenfranchised by the post-conciliar Church. He resides in the Carolinas.

[Comment Guidelines - Click to view]
The Remnant values the comments and input of our visitors. It’s no secret, however, that trolls exist, and trolls can do a lot of damage to a brand. Therefore, our comments are heavily monitored 24/7 by Remnant moderators around the country.  They have been instructed to remove demeaning, hostile, needlessly combative, racist, Christophobic comments, and streams not related to the storyline. Multiple comments from one person under a story are also discouraged. Capitalized sentences or comments will be removed (Internet shouting).
The Remnant comments sections are not designed for frequent personal blogging, on-going debates or theological or other disputes between commenters. Please understand that we pay our writers to defend The Remnant’s editorial positions. We thus acknowledge no moral obligation whatsoever to allow anyone and everyone to try to undermine our editorial policy and create a general nuisance on our website.  Therefore, Remnant moderators reserve the right to edit or remove comments, and comments do not necessarily represent the views of The Remnant.
Last modified on Friday, August 27, 2021