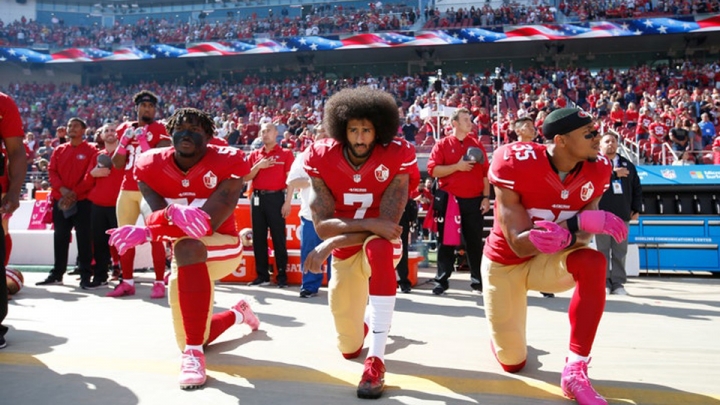 There is no denying that football has replaced baseball not just on the professional level, but at every level of play as the American pastime.   In its first schedule expansion since 1978, the NFL regular season will consist of 17 games resulting in more cash for players and continued peace with the players’ union – for the time being.

NFL Commissioner Roger Goodell has extended his punitive consequences from yellow armbands to not getting paid to coercing players to accept the COVID vaccine.  Provided a game is postponed due to a COVID outbreak and not rescheduled, neither team will be paid.

Goodell exemplifies how the NFL is less about the game on the field and more about virtue signaling to their leftist comrades. It commenced with pink socks for Breast Cancer Awareness, taking a knee for the National Anthem, the Redskins abandoning their name, COVID overkill and now playing of the Black National Anthem.

Goodell suspended quarterback Tom Brady once for deflating footballs but capitulates to every woke cause that crosses his path.  Goodell is the one who needs to be checked for deflated balls.

Kind of ironic especially when the league had a hissy fit every time Tim Tebow took a knee for Jesus Christ.

In 1919, “Lift Every Voice and Sing” was branded by the NAACP as, “the Negro national anthem.”  Ironically, the James Weldon Johnson poem that the song derives its inspiration from is straight out of the Bible’s Old Testament book of Exodus.  Kind of ironic especially when the league had a hissy fit every time Tim Tebow took a knee for Jesus Christ.  NFL executives don’t approve of quarterbacks who kneel for any reason other than to run out the clock.  Tebow was never the real issue.  Rather, the issue is our willingness to be bullied into believing that prejudice cloaked as tolerance is acceptable.

Provided everyone gets to sing their own anthem, whistling “Dixie” can’t be far behind.  Such a lineup of anthems will provide for more commercial airtime that equals more money in NFL coffers.  Such woke window dressing is a Goodell win-win.  It is the NFL’s version of singing the tune of the progressive leftist who believes a cover-two is an admission charge rather than a defensive zone formation.

Longtime conservative black columnist, Armstrong Williams, was spot on: “The overwhelming majority of Black Americans believe in the symbolism and the words from the National Anthem.  However, the woke left and their media cronies are set on finding ways to further divide Americans along the lines of race.”

There are times when I don’t know what I miss more; my youth in the Big Apple, the unparalleled 1980’s, or the old NFL that was void of virtue signaling, poor sportsmanship and political correctness.

Those in Democrat-controlled cities where most of the NFL plays are more concerned about the growing violence than what anthems are being endorsed by a football league that delights in its newfound wokeness. A sampling of three cities reveal that homicides in Washington, D.C., outpaced COVID deaths by a three to one ratio in July.  Philadelphia surpassed 300 homicides for the year and remains on pace to set a new city record, while Chicago registered 106 murders in July.

Symbolic window dressing by the NFL is one thing, crime, and mayhem something else.

Provided NFL suits want to help those in the inner cities, the league would invest in after-school mentoring and tutoring that enriches opportunity. 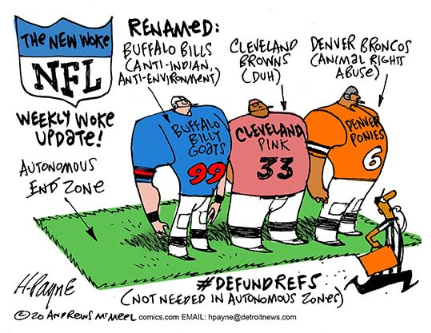 The Washington Football Team replaced their traditional cheerleaders with a mixed gender dance troupe that includes males, females, gays, lesbians, trans-genders, and no genders of all races and creeds.  Such an undertaking has all the makings of a cable miniseries.  Washington will also prohibit fans from wearing Native American headdresses and face paint to games.  After two years, the team still does not have a mascot, which is more proof that nothing ever gets done right in the nation’s capital.

There are times when I don’t know what I miss more; my youth in the Big Apple, the unparalleled 1980’s, or the old NFL that was void of virtue signaling, poor sportsmanship and political correctness.

Give me those New York Giants of Taylor, Simms, Carson and Bavaro any day.

[Comment Guidelines - Click to view]
The Remnant values the comments and input of our visitors. It’s no secret, however, that trolls exist, and trolls can do a lot of damage to a brand. Therefore, our comments are heavily monitored 24/7 by Remnant moderators around the country.  They have been instructed to remove demeaning, hostile, needlessly combative, racist, Christophobic comments, and streams not related to the storyline. Multiple comments from one person under a story are also discouraged. Capitalized sentences or comments will be removed (Internet shouting).
The Remnant comments sections are not designed for frequent personal blogging, on-going debates or theological or other disputes between commenters. Please understand that we pay our writers to defend The Remnant’s editorial positions. We thus acknowledge no moral obligation whatsoever to allow anyone and everyone to try to undermine our editorial policy and create a general nuisance on our website.  Therefore, Remnant moderators reserve the right to edit or remove comments, and comments do not necessarily represent the views of The Remnant.
back to top
Last modified on Thursday, August 19, 2021
Tweet

More in this category: « My Experience with the New Mass THE TRUMP TWEETS: Update on Trump's Class Action Lawsuit vs Big Tech »