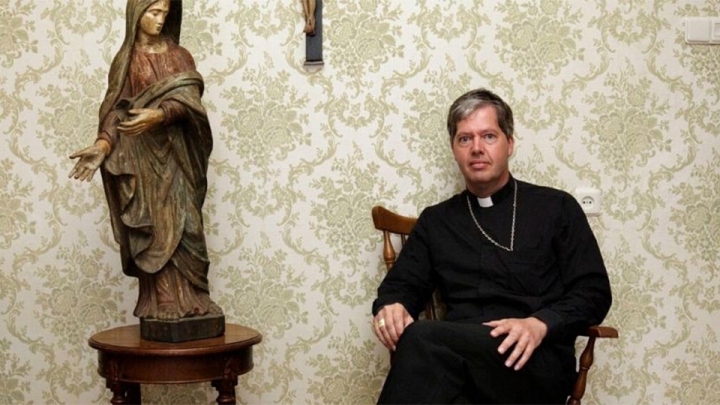 An Evil Edict from Pope Francis

Pope Francis promotes synodality: everyone should be able to talk, everyone should be heard. This was hardly the case with his recently published motu proprio Traditionis Custodes, an ukase [imperial edict] that must put an immediate termination on the traditional Latin Mass. In so doing, Francis puts a big bold line through Summorum Pontificum, Pope Benedict’s motu proprio that gave ample scope to the old Mass.

The fact that Francis here uses the word of power without any consultation indicates that he is losing authority. This was already evident earlier when the German Bishops’ Conference took no notice of the Pope’s advice regarding the synodality process. The same occurred in the United States when Pope Francis called on the Bishops’ Conference not to prepare a document on worthy Communion. The pope must have thought that it would be better [in this case] not to give advice any more, but rather a writ of execution, now that we’re talking about the traditional Mass!

Pope Francis is now pretending that his motu proprio belongs to the organic development of the Church, which utterly contradicts the reality.

The language used looks very much like a declaration of war. Every pope since Paul VI has always left openings for the old Mass. If any changes were made [in that opening], they were minor revisions—see, for example, the indults of 1984 and 1989. John Paul II firmly believed that bishops should be generous in allowing the Tridentine Mass. Benedict opened the door wide with Summorum Pontificum: “What was sacred then is sacred now.” Francis slams the door hard through Traditionis Custodes. It feels like a betrayal and is a slap in the face to his predecessors.

By the way, the Church has never abolished liturgies. Not even Trent [did so]. Francis breaks completely with this tradition. The motu proprio contains, briefly and powerfully, some propositions and commands. Things are explained in more detail by means of an accompanying longer statement. This statement contains quite a few factual errors. One of them is the claim that what Paul VI did after Vatican II is the same as what Pius V did after Trent. This is completely far from the truth. Remember that before that time [of Trent] there were various transcribed manuscripts in circulation and local liturgies had sprung up here and there. The situation was a mess.

Liturgy is not a toy of popes; it is the heritage of the Church.

Trent wanted to restore the liturgies, remove inaccuracies, and check for orthodoxy. Trent was not concerned with rewriting the liturgy, nor with new additions, new Eucharistic prayers, a new lectionary, or a new calendar. It was all about ensuring uninterrupted organic continuity. The missal of 1570 harkens back to the missal of 1474 and so on back to the fourth century. There was continuity from the fourth century onwards. After the fifteenth century, there are four more centuries of continuity. From time to time, there were at most a few minor changes—an addition of a feast, commemoration, or rubric.

In the conciliar document Sacrosanctum Concilium, Vatican II asked for liturgical reforms. All things considered, this was a conservative document. Latin was maintained, Gregorian chants retained their legitimate place in the liturgy. However, the developments that followed Vatican II are far removed from the council documents. The infamous “spirit of the council” is nowhere to be found in the council texts themselves. Only 17% of the orations of the old missal of Trent can be found [intact] in the new missal of Paul VI. You can hardly speak of continuity, of an organic development. Benedict recognized this, and for that reason gave ample space to the Old Mass. He even said that no one needed his permission (“what was sacred then is still sacred now”).

What Pope Francis is doing here has nothing to do with evangelization and even less to do with mercy. It is more like ideology.

Pope Francis is now pretending that his motu proprio belongs to the organic development of the Church, which utterly contradicts the reality. By making the Latin Mass practically impossible, he finally breaks with the age-old liturgical tradition of the Roman Catholic Church. Liturgy is not a toy of popes; it is the heritage of the Church. The Old Mass is not about nostalgia or taste. The pope should be the guardian of Tradition; the pope is a gardener, not a manufacturer. Canon law is not merely a matter of positive law; there is also such a thing as natural law and divine law, and, moreover, there is such a thing as Tradition that cannot simply be brushed aside.

What Pope Francis is doing here has nothing to do with evangelization and even less to do with mercy. It is more like ideology.

Go to any parish where the Old Mass is celebrated. What do you find there? People who just want to be Catholic.

Go to any parish where the Old Mass is celebrated. What do you find there? People who just want to be Catholic. These are generally not people who engage in theological disputes, nor are they against Vatican II (though they are against the way it was implemented). They love the Latin Mass for its sacredness, its transcendence, the salvation of souls that is central to it, the dignity of the liturgy. You encounter large families; people feel welcome. It is only celebrated in a small number of places. Why does the pope want to deny people this? I come back to what I said earlier: it is ideology. It is either Vatican II—including its implementation, with all its aberrations—or nothing! The relatively small number of believers (a number growing, by the way, as the Novus Ordo is collapsing) who feel at home with the traditional Mass must and will be eradicated. That is ideology and evil.

If you really want to evangelize, to be truly merciful, to support Catholic families, then you hold the Tridentine Mass in honor. As of the date of the motu proprio, the Old Mass may not be celebrated in parish churches (where then?); you need explicit permission from your bishop, who may only allow it on certain days; for those who will be ordained in the future and want to celebrate the Old Mass, the bishop must seek advice from Rome. How dictatorial, how unpastoral, how unmerciful do you want to be!

If you really want to evangelize, to be truly merciful, to support Catholic families, then you hold the Tridentine Mass in honor.

Francis, in Article 1 of his motu proprio, calls the Novus Ordo (the present Mass) “the unique expression of the Lex Orandi of the Roman Rite.” He therefore no longer distinguishes between the Ordinary Form (Paul VI) and the Extraordinary Form (Tridentine Mass). It has always been said that both are expressions of the Lex Orandi, not just the Novus Ordo. Again, the Old Mass was never abolished! I never hear from Bergoglio about the many liturgical abuses that exist here and there in countless parishes. In parishes everything is possible—except the Tridentine Mass. All weapons are thrown into the fray to eradicate the Old Mass.

Why? For God’s sake, why? What is this obsession of Francis to want to erase* that small group of traditionalists? The pope should be the guardian of tradition, not the jailer of tradition. While Amoris Laetitia excelled in vagueness, Traditionis Custodes is a perfectly clear declaration of war.

I suspect that Francis is shooting himself in the foot with this motu proprio. For the Society of St. Pius X, it will prove to be good news. They will never have been able to guess how indebted they’d be to Pope Francis….

[* The bishop here uses the loaded German word ausradieren, which was used by Hitler when he was speaking of erasing cities off the map: "Wir werden ihre Städte ausradieren."]

[Comment Guidelines - Click to view]
The Remnant values the comments and input of our visitors. It’s no secret, however, that trolls exist, and trolls can do a lot of damage to a brand. Therefore, our comments are heavily monitored 24/7 by Remnant moderators around the country.  They have been instructed to remove demeaning, hostile, needlessly combative, racist, Christophobic comments, and streams not related to the storyline. Multiple comments from one person under a story are also discouraged. Capitalized sentences or comments will be removed (Internet shouting).
The Remnant comments sections are not designed for frequent personal blogging, on-going debates or theological or other disputes between commenters. Please understand that we pay our writers to defend The Remnant’s editorial positions. We thus acknowledge no moral obligation whatsoever to allow anyone and everyone to try to undermine our editorial policy and create a general nuisance on our website.  Therefore, Remnant moderators reserve the right to edit or remove comments, and comments do not necessarily represent the views of The Remnant.
back to top
Last modified on Wednesday, July 28, 2021
Tweet
More in this category: « The Red Herring at the Heart of Traditionis Custodes You do NOT Have my Permission »