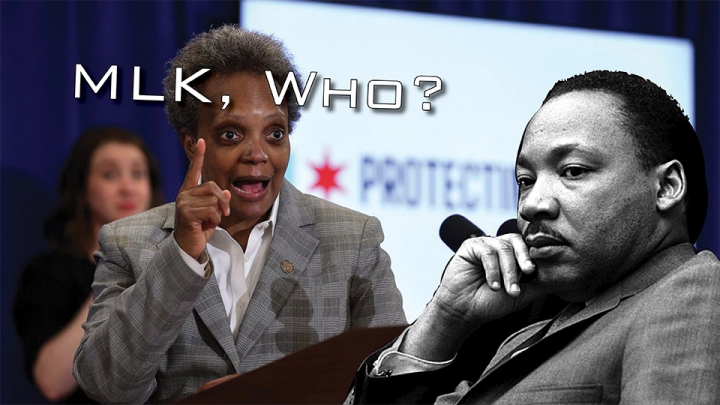 We have gone from social distancing to racial distancing, courtesy of Chicago Mayor Lori Lightfoot, who is a proud black lesbian and recently declared, “I will be exclusively providing one-on-one interviews only with journalists of color.”

The justification for this blatantly racist tort is that white reporters simply cannot walk a mile in her shoes, so they must be shunned.  The historic Supreme Court justices who decided Brown v. Board of Education would not be amused.

Lightfoot lamented “institutionalized racism” throughout the media and suggested that any negative coverage she receives in office is the result of “racial and implicit bias.”  Like the racists of the Jim Crow South, Lightfoot ranks reporters by their skin color.  Lightfoot’s discriminatory interview policy is a slight to all Chicagoans.  Lightfoot advocates what sociologists define as “reverse racial segregation,” which is just as hateful and abhorrent as Jim Crow.

Lightfoot is re-segregating our nation’s third largest city and using “racial and implicit bias” as the excuse to deflect from her own inadequacies, failed policies and feckless governance.

White or not, successful mayors do not blame the messengers.

So much for Martin Luther King’s dream of a colorblind society where race is nonessential to being an American.  Where has King’s legacy gone when such loathing, bigotry and prejudice has never been condemned by any civil rights groups and in particular, Black Lives Matter?

The woke media’s continued silence only sanctions this obnoxious behavior throughout the Democrat Party just like the Jim Crow days proving just how cyclical history can be.

Never mind Chicago’s soaring crime and record murder rates, failing public schools, and hurting downtown.  When a city has as many shootings as Chicago and its mayor worries more about the skin tone of reporters – the electorate suffers.  Then again, what do you expect from a city where their cemeteries double as voting venues.  Lightfoot is re-segregating our nation’s third largest city and using “racial and implicit bias” as the excuse to deflect from her own inadequacies, failed policies and feckless governance.

The underlying crux of the problem has been just too many white guys milling around asking questions.

Since Lightfoot is gay, black, and female, she is not to be questioned, criticized, or best – recalled.

Such pungent wokeism and cancel culture masquerading as progress and equality, rather than grievance and retribution, must send a thrill up the leg of progressive leftists everywhere.

Race is the perfect divergence for a politician of color like Lightfoot.  Apparently unbeknownst to Lightfoot is that her blatant hypocrisy serves as additional ammunition for bigots. One cannot demand equality when one openly discriminates.  Lightfoot is another exemplar in a long line of Democrat mayors who are incapable of dealing with the daunting challenges of their cities that have suffered through decades of gross mismanagement.

Placing judgment and exclusion based purely on someone’s skin tone and not their merit was the foundation for the Civil Rights Act that protects against discrimination where standards are applied uniformly regardless of race.

Lightfoot’s defiance distinguishes equality from equity that runs counter to the protections guaranteed in our Constitution.  Where is the U.S. Justice Department’s investigation?

The Left has hijacked Civil Rights into fashioning certain identifiable groups as permanent victims and protected classes of people who are excused from life’s responsibilities and virtues.

The Left, led by President Biden, would rather bemoan relentlessly about white criminals in Tulsa a century ago than where the problem truly lies with present-day black criminals – political expediency at its best.  In an irony for the ages, black residents of Tulsa 100 years ago would be astonished to learn that it is no longer racist white criminals to be feared, but their own kind who are the biggest perpetrators of crime and chaos within their neighborhoods.

All degrees of the woke race agenda and its offspring – the cancel culture – are anti-white, anti-Christian and anti-male, and no functioning society can survive such a fundamental and corrupted transformation.

Since Lightfoot is gay, black, and female, she is not to be questioned, criticized, or best – recalled.  No national figure in this second decade of this 21st century will dare to call out such obvious and blatant racist bigotry.  Moreover, there are no Chicago candidates of better quality than Lightfoot, so the slide of the nation’s third largest metropolis will only accelerate.

Led by the political left, America is again dividing itself by race and roaming toward a perilous cliff.

[Comment Guidelines - Click to view]
The Remnant values the comments and input of our visitors. It’s no secret, however, that trolls exist, and trolls can do a lot of damage to a brand. Therefore, our comments are heavily monitored 24/7 by Remnant moderators around the country.  They have been instructed to remove demeaning, hostile, needlessly combative, racist, Christophobic comments, and streams not related to the storyline. Multiple comments from one person under a story are also discouraged. Capitalized sentences or comments will be removed (Internet shouting).
The Remnant comments sections are not designed for frequent personal blogging, on-going debates or theological or other disputes between commenters. Please understand that we pay our writers to defend The Remnant’s editorial positions. We thus acknowledge no moral obligation whatsoever to allow anyone and everyone to try to undermine our editorial policy and create a general nuisance on our website.  Therefore, Remnant moderators reserve the right to edit or remove comments, and comments do not necessarily represent the views of The Remnant.
back to top
Last modified on Wednesday, June 9, 2021
Tweet

More in this category: « June is the Month of the Sacred Heart, Join the Remnant's Sacred Heart League! On the Home (School) Front: Forming the Battle Lines »