The Atlantic: "The Pope in the Attic: Benedict in the Time of Francis" 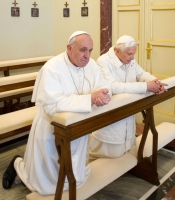 A very interesting piece came out in the Atlantic yesterday by Paul Elie which can be read in full here. The article focuses on Pope Emeritus Benedict's life now that he has abdicated. However, it also discusses Pope Francis and includes some key interview quotes from Vatican insiders never before seen. It is worth a read. To whet your appetite, take a look at the four quotes below:

“The irony,” a well-placed Jesuit at the Vatican told me, “is that this pope [Francis], great agent of decentralization in the Church, is personally the most centralized pope since Pius the Ninth. Everything has to cross his desk.”

"There, at 6, he [Benedict] says Mass for the household... The chapel might be the chapel at a Catholic high school in Yonkers: beige brick walls, plank pews, standard-issue wooden crucifix. The reforms of Vatican II detached the altar from the back wall in Catholic churches and turned it around so that the priest at Mass faces the people, rather than facing away, as if toward God on their behalf. But here the lace-dressed altar is pushed nearly to the wall, the old-fashioned way. The women, on their knees, contemplate the old man’s back."

"In our interview, Kasper spoke at length about the two popes. “There are real convergences between them,” he said. “Benedict sought to reform the Curia, and now Francis seeks to reform the Curia. But certainly there is more collegiality under Francis, more emphasis on the local church. And other changes. The red slippers: ridiculous, ridiculous! Now all of the cardinals are wearing simple crosses. These changes are irreversible.” He went on: “They have different ways of reading the signs of the times. Benedict is good with ideas, but he had poor judgment of people. Francis knows people, how they think. He took the city bus in Buenos Aires. He calls people on the phone. He uses the computer. But Benedict, he doesn’t drive”—here the Friendly Cardinal grasped an imaginary steering wheel. “He doesn’t do Internet”—here he pointed at his laptop. “He is not … normal! Francis, he is normal!”

"The traditionalists have had enough, it is said, and they’re going to press their case. But there’s no sign that Francis will accommodate them. “Francis knows exactly how power is spelled,” says Bernd Hagenkord, a Jesuit who is in charge of German programming for Vatican Radio. “He’s a communicator in the league with Mother Teresa and the Dalai Lama. They say he’s being unclear, but we know exactly what he means.”

Published in Fetzen Fliegen
back to top
Last modified on Thursday, April 17, 2014
Tweet

More in this category: « This Is Why They Hate Us Fulton Sheen- The Last Good Friday Sermon (1979) »