A STAR-SPANGLED MISFIRE: The State of Washington DC 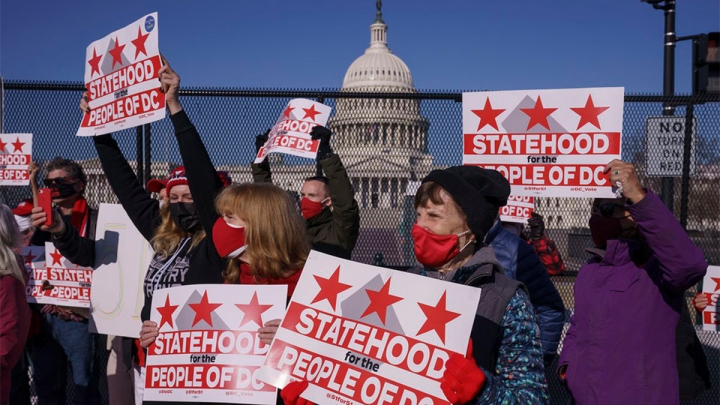 In May 2008, presidential candidate Barack Obama announced during a campaign stop that he had been to 57 states.  Such an embarrassing blunder was glazed over like a Krispy Kreme donut.  In retrospect, it was perhaps a Freudian slip.  Provided Democrats get their way, they will get closer to 57 by adding Washington D.C. as the 51st state, with Puerto Rico waiting on deck.

As president, Obama must regret not going for broke with the whole socialist agenda when he had the chance.  President Biden has certainly wasted no time in picking up the slack in his first 100-days in office.

Provided you need to be reminded: elections have consequences.

In Article I, Section 8 of the Constitution, the Founding Fathers created a special federal district for the sole purpose of not being a state.  Writing in The Federalist No. 43, James Madison clarified that without a separate federal district, the federal government “might be insulted and its proceedings be interrupted with impunity.”  It is obvious the Founders did not want to subject the federal government to the sway of any state government.

The statehood push is ultimately a power play for Democrats who want to turn D.C. into a city-state as the deep blue District will guarantee them two seats in the Senate, changing the chamber’s partisan composition in their favor.

Moreover, D.C. statehood would violate the intent that states have substantial land mass. Aside from the original 13 states, no state was smaller than 30,000 square miles until Hawaii entered the union in 1959.  However, with a total of 137 islands and over 10,000 square miles, Washington D.C. does not even come close.

If that’s not enough, the 23rd Amendment enfranchised D.C. residents in presidential elections with three Electoral College votes, tenured its venue and size, designating it as the “seat of Government.” The amendment established that the only way to repeal a constitutional amendment is with another amendment.

It was no oversight that the nation’s capital is not a state, but rather an exclusive territory under the absolute authority of Congress, where elected representatives and senators from every state in the union could meet on neutral ground to conduct the nation’s business.

If the city’s denizens do not appreciate their longstanding historical significance, they can always vote with their feet and move.  This legislation symbolically labeled H.R. 51 would turn the District into exactly what the Founders rebuffed.

Here is yet another version of Democrat unity and healing where the end goal is a one-party totalitarian centralized state.

In a dichotomy of the times, Democrats desire to localize what the Constitution explicitly has federalized, while at the same time trying to federalize everything else.  The statehood push is ultimately a power play for Democrats who want to turn D.C. into a city-state as the deep blue District will guarantee them two seats in the Senate, changing the chamber’s partisan composition in their favor.  With the Chairman of the House Judiciary Committee wanting to pack the Supreme Court, adding two additional Senators via D.C. is a Democrat two-fer.

Democrats carry on like this because they know Republicans will not put up a fight. Here is yet another version of Democrat unity and healing where the end goal is a one-party totalitarian centralized state.

This legislation is nothing but a power grab in the first-degree.  If it were truly about statehood and the fabricated mantra of “taxation without representation,” Democrats would introduce legislation for D.C. to become part of Maryland from which it was initially ceded.  But that doesn’t work as it would not obtain the desired two additional Senate seats.

Without missing an opportunity to race bait, New York Democrat Rep. Mondaire Jones, called arguments against D.C. statehood “racist trash.”  Naturally, if you oppose D.C. statehood on any level be it Constitutional, historical, you name it; you are to be smeared as a racist because a majority of its residents are black.

With the Senate filibuster requiring 60 senators to advance any legislation, the odds of D.C. statehood are formidable.  Democrat Sen. Joe Manchin of West Virginia said he will not support the legislation or efforts to eliminate the filibuster.  “If Congress wants to make D.C. a state, it should propose a constitutional amendment,” Manchin suggested.

Manchin is one Democrat who actually gets it.

Perhaps more will join him.

[Comment Guidelines - Click to view]
The Remnant values the comments and input of our visitors. It’s no secret, however, that trolls exist, and trolls can do a lot of damage to a brand. Therefore, our comments are heavily monitored 24/7 by Remnant moderators around the country.  They have been instructed to remove demeaning, hostile, needlessly combative, racist, Christophobic comments, and streams not related to the storyline. Multiple comments from one person under a story are also discouraged. Capitalized sentences or comments will be removed (Internet shouting).
The Remnant comments sections are not designed for frequent personal blogging, on-going debates or theological or other disputes between commenters. Please understand that we pay our writers to defend The Remnant’s editorial positions. We thus acknowledge no moral obligation whatsoever to allow anyone and everyone to try to undermine our editorial policy and create a general nuisance on our website.  Therefore, Remnant moderators reserve the right to edit or remove comments, and comments do not necessarily represent the views of The Remnant.
back to top
Last modified on Wednesday, May 5, 2021
Tweet

More in this category: « Debtonomics Glenn Is the Boy Karen »