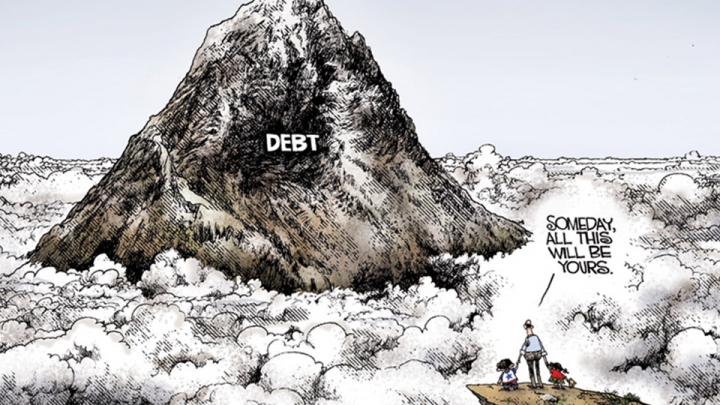 There are many American mountain peaks across our fruited plain. The tallest and perhaps the most significant one that still finds itself growing while casting a looming shadow from sea to shining sea is Washington D. C.’s Mount Deficit.

Babylon on the Potomac has deputized into the district of compensation as the federal government spends itself into oblivion.  It does not take a clairvoyant to comprehend that our course is a dangerous one.

You do not hear too much about this mountain of debt that literally grows by the second as it has been kicked down the road for generations.  Proof of this can be found in midtown Manhattan where the National Debt Clock has been keeping a running tab since 1989 and has earned its place in American lore as an actual tourist attraction.

Nobody in Washington talks in billions any longer.

For it is trillions that are the coin of the realm in 21st century America.

Moreover, the Federal Reserve’s dismissive attitude toward inflation risks a repeat of the 1970s’ stagflation.

In addition to the trillions of stimulus monies, the Biden Administration’s push for tax increases and another $2.3 trillion for “infrastructure” makes for a toxic financial cocktail that has the potential to turn the 2021 recovery into a recession-sized hangover.

According to the Congressional Budget Office, the federal government’s publicly held debt is 102% of the nation’s gross domestic product (GDP) – something it has not reached since the conclusion of World War II.  Moreover, there are no signs of anything changing and therein lies the crux of the problem.

Plenty of academic white papers agree that once debt to GDP moves above 90%, economic growth is handcuffed while risk of a financial crisis multiplies.  Markets are being artificially drugged by a combination of trillions in stimulus and low interest rates. Such a liability is only sustainable if interest rates remain low. Those same studies underscored how government bond yields that remain low will rise at the onset of a crisis.

How long this continues is anyone’s guess, but there are limits like when investors stop buying government bonds as they are the canaries in the coal mine.

Low interest rates make it nearly impossible to escape from under a mountain of debt.  Low rates make it too easy to borrow begging the question why should any politician run on a platform of reducing debt?  William Gale, a senior fellow at the left leaning Brookings Institution admitted: “Over history, if high debt was not problematic, countries would be increasing their debts, because that’s the easiest thing in the world for politicians.”

Thus, governments worldwide pile on debt, taking advantage of the record-low interest rates in an attempt to grow their economy.  No nation is more guilty of this than the U.S.

Debt never seems to matter until it does, and if you have read this far you grasp what is at stake. Debt and its consequences are by no means a captivating subject, but a necessary one.

With the debt having eclipsed our GDP, and inflation moving in a northly direction and merged with a stock market being bloated daily, the outcome will not be favorable.  And that is putting it mildly.

In addition to the trillions of stimulus monies, the Biden Administration’s push for tax increases and another $2.3 trillion for “infrastructure” makes for a toxic financial cocktail that has the potential to turn the 2021 recovery into a recession-sized hangover.

It is the Congress who controls the federal purse strings.  Running trillion-dollar deficits has become status quo because it is not politically expedient to do otherwise.  No political party is clean of this imbroglio.  The biggest difference between us and the rest of the world is that the U.S. is the cornerstone of the global financial system.

Overtones of Mark Twain ring clear about how his bankruptcy came about: “First slowly, then all of a sudden.”

No government can print or spend its way to prosperity.

We need to get our fiscal house in order to provide a passageway for our children and grandchildren off Mount Deficit.

[Comment Guidelines - Click to view]
The Remnant values the comments and input of our visitors. It’s no secret, however, that trolls exist, and trolls can do a lot of damage to a brand. Therefore, our comments are heavily monitored 24/7 by Remnant moderators around the country.  They have been instructed to remove demeaning, hostile, needlessly combative, racist, Christophobic comments, and streams not related to the storyline. Multiple comments from one person under a story are also discouraged. Capitalized sentences or comments will be removed (Internet shouting).
The Remnant comments sections are not designed for frequent personal blogging, on-going debates or theological or other disputes between commenters. Please understand that we pay our writers to defend The Remnant’s editorial positions. We thus acknowledge no moral obligation whatsoever to allow anyone and everyone to try to undermine our editorial policy and create a general nuisance on our website.  Therefore, Remnant moderators reserve the right to edit or remove comments, and comments do not necessarily represent the views of The Remnant.
back to top
Last modified on Sunday, May 2, 2021
Tweet

More in this category: « SATAN IS ON THE MARCH: The Francis Court's “disturbing gallery of horrors” A STAR-SPANGLED MISFIRE: The State of Washington DC »