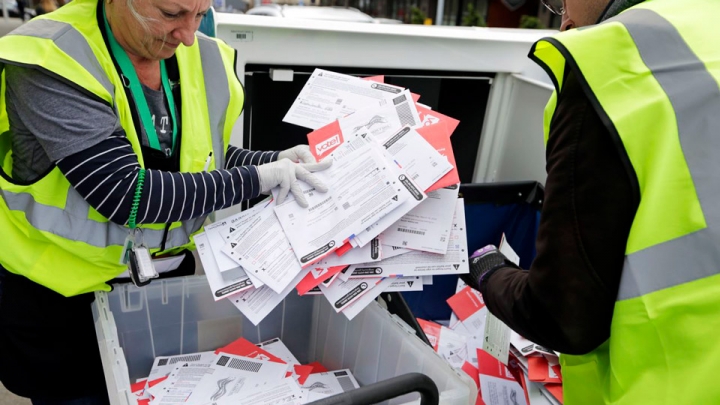 The steadfastness and credibility of any democracy depends on the fidelity of its elections. The legitimacy of government is contingent upon the people’s trust. The basis of that trust is transparent, fair elections that should never be a partisan issue.

Democrats, with their majority in the House, wasted no time introducing: “For the People Act” (FTP) – the same slogan that Kamala Harris’ campaign fizzled out on has been revived and named for the most left-reaching voting rights act ever propositioned. Democrats are seeking to increase their Congressional majority from the 2020 election are undaunted in wielding their power in order to do it.

The FTP passed the House 220-210, with all Republicans and one Democrat opposing it.  Upending the Constitutional order of state-run elections, the FPT is another feel good piece of legislation that sounds ethical and nonpartisan but will in fact strip away every state’s election laws, making it easier to cheat and more difficult to catch those who do.

Due to the COVID pandemic, many states, including Pennsylvania, made temporary changes for the 2020 election where it increased mail-in balloting and extended deadlines beyond Election Day that the FTP would make permanent and nationwide.

If you recall, six weeks before November’s presidential election, the U.S. Supreme Court allowed a questionable Pennsylvania State Supreme Court decision where ballots cast after Election Day were to be counted.  It was another case of the federal judiciary usurping state legislative jurisdiction of elections.

Banning something as simple as proving one’s identity only invites fraud.

The FTP will provide more of the same.

Such provisions, however, are unconstitutional. Ever since the ratification of the Constitution, election laws have been the domain of the states. They include identification requirements, registration deadlines and time and dates.

The FTP would expand mail-in ballots sent to everyone on voter rolls that would not necessarily be purged of those who have moved or have died.  Moreover, it would include extended hours, days and even weeks for voting and provide for same-day registration.  No identification – no problem as the bill nixes the requirement for voters to provide identification even when requesting absentee or mail-in ballots.

Presently, 36 states have laws requiring voter identification.  Banning something as simple as proving one’s identity only invites fraud.  Ballots that arrived after Election Day would be counted, while felons, who overwhelmingly support Democrats, would have full voting rights restored.

Likewise, ballot harvesting that is unlawful in 24 states would be legalized.  Harvesting is when an individual can take other voters’ ballots and deliver them on their behalf.  This is just another invitation for deceit as harvesters could persuade voting a particular way, or even fill out the ballots themselves.

Voter fraud and the turmoil, ambiguities and disruptions it produces, is not an issue for Democrats, but their paved road to a permanent majority.

The FTP needs to be renamed: The Democrat Politician Protection Act.

Passage through the Senate would make it even more difficult to hold free and fair elections.

Every eligible voter should be able to vote without issue. The Democrat argument that “fewer voters helps Republicans” is false.  Rather, fewer fraudulent voters make American democracy stronger.

Even a blind donkey can see how Democrats seeking to jettison voting safeguards is the antithesis of constitutional intent, as integrity will be quashed and Democrats will turn the country into a de facto one-party state. Voter fraud and the turmoil, ambiguities and disruptions it produces, is not an issue for Democrats, but their paved road to a permanent majority.

FTP’s passage in the Senate remains to be seen provided 60 votes are still required.  The filibuster could very well be on life support and end up another victim of the cancel culture as Democrats used the race car in calling the longstanding political measure – racist.  Provide the Senate does fumble, expect Constitutional challenges from sea to shining sea.

We do extensive background checks for gun owners and should do the same with voters.

The last thing this nation needs is a federal takeover of state elections.  The feds have enough problems delivering the mail on time while going billions in the red every year.

We do extensive background checks for gun owners and should do the same with voters.

Democrats’ next piece of legislation should be about renaming the nation: The United Socialist States of America, or The People’s Democratic Republic of America.

Your voice needs to be heard loud and clear.

The only thing you have to lose is your Marxist utopian future.

[Comment Guidelines - Click to view]
The Remnant values the comments and input of our visitors. It’s no secret, however, that trolls exist, and trolls can do a lot of damage to a brand. Therefore, our comments are heavily monitored 24/7 by Remnant moderators around the country.  They have been instructed to remove demeaning, hostile, needlessly combative, racist, Christophobic comments, and streams not related to the storyline. Multiple comments from one person under a story are also discouraged. Capitalized sentences or comments will be removed (Internet shouting).
The Remnant comments sections are not designed for frequent personal blogging, on-going debates or theological or other disputes between commenters. Please understand that we pay our writers to defend The Remnant’s editorial positions. We thus acknowledge no moral obligation whatsoever to allow anyone and everyone to try to undermine our editorial policy and create a general nuisance on our website.  Therefore, Remnant moderators reserve the right to edit or remove comments, and comments do not necessarily represent the views of The Remnant.
back to top
Last modified on Thursday, March 25, 2021
Tweet

More in this category: « Elton John has a point, Your Holiness! GOOD FRIDAY MEDITATION: The Only Great Reset That Matters »