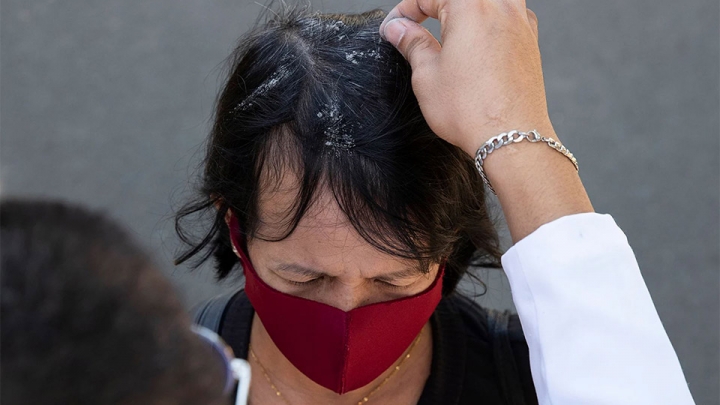 In this overthrow of Ash Wednesday for Mask Wednesday, we can see in miniature the entirety of the Bergoglio papacy and of the Modernist revolution which precipitated it.
_______

Fr. Eric Nielsen, the good and Godly pastor at St. Paul’s Catholic Student Center in Madison, Wisconsin, was famous for his Ash Wednesday Masses. Madison is a pretty hostile place for Christians, but that only used to amp us Badger Catholics up. On Ash Wednesday in particular we would give thanks for the chance to bear witness in a Colosseum like the UW. Mass after Mass, starting in the early morning, was packed with students lining up to have Fr. Nielsen inscribe on their foreheads a stark notice that they were not running with the lost, that they were a breed set apart. Going through the day and seeing others with their black crosses was a sobering, and also heartening, reminder of who we are and what we are called to be.

I think Fr. Nielsen’s Ash Wednesday Masses were standing-room-only in part because he was not skimpy with the ashes, wasn’t dainty about scrawling them on our foreheads, and wasn’t shy about telling us what it all meant. “Remember that thou art dust,” Fr. Nielsen would slowly intone, staring intently at his work as his blackened thumb made the sign of the cross on our skin. “And to dust thou shalt return.” He meant it. Amen.

Unless you happen to be in Silicon Valley, there is no arguing with the truth of the proposition that all men are mortal. But Fr. Nielsen drove it home, to our hearts via our heads, with the rough and holy physicality of the day. The ashes Fr. Nielsen used were more like broken bits of campfire charcoal than the finer-textured concoctions that priests in other parishes I have been to have used. When Fr. Nielsen did Ash Wednesday, he went all-in. A little bit of the oily ash crumbs would sprinkle down on my glasses or onto my eyelashes, as if to say, “And don’t you forget it.” There, in the dim, cold church, there was no escaping the terrible fact of my mortality, of the material contingency of my frail little pound of flesh. I am nothing, made to wither and die. It is not a metaphor that we are just crumbling clay. We are the walking dead, and in a moment our little lives will be snuffed out. We had better take stock, repent, and believe in the Gospel. It’s serious business.

This year, Pope Bergoglio exchanged Ash Wednesday for Mask Wednesday. Vatican guidelines released before the beginning of Lent suggested that priests scatter a bit of ash on the top of the heads of the faithful. The guidelines also instruct the priest to make one general blessing, and then to complete the rest of the service in silence. Here is how Vatican News puts it:

After blessing the ashes and sprinkling them with holy water in silence, the priest addresses those present, reciting once the formula found in the Roman Missal: “Repent, and believe in the Gospel” or “Remember that you are dust, and to dust you shall return”.

At that point, the note continues, the priest “cleanses his hands, puts on a face mask, and distributes ashes to those who come to him or, if appropriate, he goes to those who are standing in their places.”

He then sprinkles the ashes on each person’s head “without saying anything.”

In this overthrow of Ash Wednesday for Mask Wednesday, we can see in miniature the entirety of the Bergoglio papacy and of the Modernist revolution which precipitated it. The “covid protocols” for Ash Wednesday are pitched as sensible adjustments to the pandemic. What they are is a revolt against Christ. Go through the motions—that’s good enough for Newchurch.

We are dust. We are motes, swollen with pride, and we have no hope without our Redeemer. But for Newchurch, for the Modernists who run the Vatican and most of the Catholic hierarchy worldwide, we can adopt “protocols” to mitigate death. The implication is that we can overcome it. On the very day of the liturgical year when we are to be reminded that we stand on foolish illusions unless we stand in the Grace of God—the day when our mortality is rubbed into our foreheads and spoken directly into our ears—the Novus Ordo cabal now says that we need to mask up and be quiet.

We are bombarded with talk of death. The news shows images of body bags stacked in moving vans, of prisoners digging mass graves. There are not enough ventilators, there is not enough oxygen in tanks, and the numbers have come to dominate the headlines. The covid death toll became a macabre political barometer, with the godless Left trying to politicize a Chinese virus to the detriment of Donald Trump. Round-number milestones were marked with fake circumspection, as the pundits did the mental math on how many polling points it would cost the president for each rollover of the covid death odometer. “Bury all the dead a Mar-a-Lago,” one deranged politico wrote in USA Today. Even when cold and stiff the dead are still meant to serve the ends of the Democrat takeover of every aspect of life. Mask up, plebs. If you die then it’s your fault, and also Trump’s, so we’re going to throw your corpse into a hole by the former president’s house so you, and he, and we will always know that the only meaning of death is whether it can be useful in the upcoming election.

Is Bergoglio any different, in fact? He and the rest of Newchurch seem not to know what death is. They struggle to put it into a category. For Democrats the category is politics, while for Bergoglio it’s the airier, fluffier-sounding category of safety, or global cooperation, or going along with new regimes of dictatorial “public health”. Aldo Maria Valli put it perfectly in “Is There Still a Pope in Rome?” when he wrote that “the God of whom Bergoglio speaks is not one who forgives but rather one who removes all blame.” There is no sin in Bergoglio’s death. There is no fall that makes us live hard up, every day, against the terror of the end of our existence. There is only a kind of therapeutic ringing of bells, some breezy talk about encounter (as Valli also notes), and a set of rituals not intended to be liturgical.

Bergoglio’s Ash Wednesday—Mask Wednesday—is the opposite of Fr. Nielsen’s laparoscopic soul surgery on those gray late-winter days back in Wisconsin. The priest does not look at me—right through me—and say “You are as good as dead, my son.” Nothing so offensive as that! Bergolio’s Newchurch soothes us: “Do what the globalists tell you, and you don’t have to die.”

This is a paraphrase of what the serpent told our first parents in the Garden. They listened, and we all died with them. Bergoglio is not shepherding us to meet that death—the only inheritance human beings are capable of producing by themselves—head on, with only the Blood of the Lamb to speak on our behalf. He is rejecting the saving power of Christ for the sanitizing authoritarianism of the godless.

Mask Wednesday is not kind-of Ash Wednesday. It is a mockery of it. Covid-year has surrounded us with death and also rendered us idiotic in the face of it. Newchurch only makes it worse. The real masking here is not us, but Newchurch masquerading as the real thing and leading us all into perdition. We are coming into Defcon 1 on the Christian persecution front, and Bergoglio is taking his cues from Klaus Schwab. Abandon the cross on your foreheads, turn instead to disinfectants and baby-part vaccines. But the denial of Christ is real death, permanent disaster. Mask Wednesday, or Ash Wednesday? Christianity, or its ape? Fr. Nielsen, or Melinda Gates? This is our choice. Bergoglio, in his arch-heresy, offers the faithful nothing Catholic, but he does offer us at least this much.

[Comment Guidelines - Click to view]
The Remnant values the comments and input of our visitors. It’s no secret, however, that trolls exist, and trolls can do a lot of damage to a brand. Therefore, our comments are heavily monitored 24/7 by Remnant moderators around the country.  They have been instructed to remove demeaning, hostile, needlessly combative, racist, Christophobic comments, and streams not related to the storyline. Multiple comments from one person under a story are also discouraged. Capitalized sentences or comments will be removed (Internet shouting).
The Remnant comments sections are not designed for frequent personal blogging, on-going debates or theological or other disputes between commenters. Please understand that we pay our writers to defend The Remnant’s editorial positions. We thus acknowledge no moral obligation whatsoever to allow anyone and everyone to try to undermine our editorial policy and create a general nuisance on our website.  Therefore, Remnant moderators reserve the right to edit or remove comments, and comments do not necessarily represent the views of The Remnant.
back to top
Last modified on Tuesday, March 2, 2021
Tweet