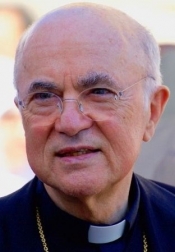 What does it matter if Saint Teresa of Avila, Saint Dominic, Saint Clare, Saint Francis de Sales and all the Founder Saints are left scandalized by the systematic demolition of their Orders, when the words of the Holy See enjoy the benign applause of the globalist elite, the infamous sect, and the enemies of Christ!
__________

On February 2 the Church celebrates the Purification of Mary Most Holy and the Presentation of Our Lord Jesus Christ in the Temple. The feast, also called Candlemas because of the candles that are blessed during the rite on this day, began as a Marian celebration of a penitential nature.

In ancient times in Rome the procession from Sant’Adriano in the Roman Forum to Saint Mary Major required the Pope to walk barefoot in black vestments. Only with the reform of John XXIII in 1962 was pre-eminence given to the “Christological dimension.” A soul rooted in solid doctrine and sound spirituality does not consider the glory of the Son to be obscured by the honors which the Church offers to His Mother, because He alone is the source of all the greatness which we celebrate in Her!

According to the precepts of the Ancient Law, the women of Israel were required to abstain for forty days from approaching the tabernacle, and at the end of this period they had to offer a purificatory sacrifice which consisted of a lamb to be consumed in holocaust, to which was added a turtledove or a pigeon, offered for sin. Along with the purification of the woman who had just given birth, the divine commandment prescribed that the first-born sons – who according to the Law were declared to be the property of the Lord – were to be redeemed at the price of five shekels of twenty obolus each.

These rites of purification of the woman and the redeeming of the first-born obviously were not necessary either for Mary Most Holy, who was conceived without any stain of sin and was preserved as Ever-Virgin before, during, and after childbirth, or for the Son of God, He who is the author Himself of the redemption of humanity which fell in Adam. And yet, in the counsel of the Most High, these solemn acts of obedience to the Law and of voluntary submission show us the humility of the Mother of God and Her Divine Son. On that occasion, the Second Temple of Jerusalem was sanctified, according to the prophecy of Haggai, by the presence of the “desired of all the nations” (Hag 2:7), who releases the tongue of Simeon in the canticle of the Nunc dimittis.

On this day, the Holy Church in her traditional rites offers her children to the Majesty of God, consecrating them to His service by means of the Sacred Tonsure and the Minor Orders. During the ceremony of the cutting of the hair, a sign of penitence and of renouncing the vanities of the world, an antiphon is chanted taken from the Psalms: “Dominus pars hereditatis meæ et calicis mei: tu es qui restitues hereditatem meam mihi [The Lord is the portion of my inheritance and my cup: it is you who shall restore my inheritance to me]” (Ps 16: 5). These splendid words proclaim that the Lord is the guarantor of our inheritance, and the One who brings us back to full possession of that which we had lost with the sin of Adam. Thus the cleric, vesting in the white surplice, recites: “Indue me, Domine, novum hominem, qui secundum Deum creatus est in justitia, et sanctitate veritatis [Clothe me, Lord, as new man, who is created according to God in justice and the sanctity of truth]” recalling that in Christ we find the new man, created in the image of God in justice and the holiness of truth. For it is only in the light of Truth, a divine attribute of the Most Holy Trinity, that the flame of true Charity can burn. Fraternal charity, which binds us reciprocally to our brothers, in fact presupposes the paternity of God, without whom it is corrupted into sterile philanthropy, humanistic solidarity, and gloomy Masonic brotherhood.

On January 18, the Congregation for Institutes of Consecrated Life and Societies of Apostolic Life published a Letter, addressed to all consecrated men and women. Anyone who would imagine that, in a document promulgated for the XXV Day of Consecrated Life, there would be some sort of doctrinal, moral, or spiritual reference to the mystery of the Purification of the Most Holy Virgin Mary or to the Presentation of Our Lord in the Temple, would assuredly be disappointed.

Indeed, he would also be led to believe that the letter, written in cold bureaucratic prose, issued from the grey Orwellian offices of the Ministry of Truth, and not from the Roman Dicastery which presides, in the name of the Roman Pontiff, over all the Religious of the Catholic world. And yet it is sufficient to scroll through the text to the end to read – in calce [at the bottom], as the saying goes – the signatures of the Prefect João Braz de Aviz and his Secretary José Rodríguez Carballo, O.F.M.: two personalities who shine in the firmament of the Bergoglian Curia as inimitable stars.

There is no surprise, therefore, if not also a minimum of human relief, in seeing that at least the recipients of the letter have been spared the epithets which Rodríguez Carballo addressed to the nuns on November 21, 2018: “You are adult women! Deal with your life as adults, not as adulteresses” (here).

The Letter of the Congregation is an example of the “politically correct” with which the hierarchs of Santa Marta wink indecorously at gender equality, which is so dear to today’s aligned thought (we are on the wave of the new version of the Orate fratres of the reformed rite, of lectresses and acolytesses) and at all the markers of the new language: the document strains itself to make references to the pandemic, to the “universal aspiration to fraternity,” to the “new dream of fraternity and social friendship,” and also to the invitation to religious to be “architects of universal brotherhood, custodians of our common home,” “brothers and sisters of all, regardless of faith” [sic], culminating in the cry of impiety of the global religion of Fratelli Tutti: “Let us dream, then, as a single human family, as fellow travelers sharing the same flesh, as children of the same earth which is our common home, each of us bringing the richness of his or her beliefs and convictions, each of us with his or her own voice, brothers and sisters all!”

What then is the practical proposal that the Congregation offers to those who are consecrated? How does it intend to help the Religious Orders to each be faithful to their own charism, to the Holy Rule, to the Constitutions of their Founder Saints? Here are the Prefect’s lofty words:

“It is a question, then, of creating ways of accompanying, transforming, and creating; of developing projects to promote a culture of encounter and dialogue between different peoples and generations; of starting with one’s own vocational community and then reaching to every corner of the earth and to every creature, because never as during this pandemic have we experienced how everything is linked, everything is related, everything is connected” (here).

The World Economic Forum, the promoter of the Great Reset, could not have expressed it better! What does it matter if Saint Teresa of Avila, Saint Dominic, Saint Clare, Saint Francis de Sales and all the Founder Saints are left scandalized by the systematic demolition of their Orders, when the words of the Holy See enjoy the benign applause of the globalist elite, the infamous sect, and the enemies of Christ!

What else does “creating ways of accompanying, transforming, and creating” mean, if not an invitation to deny fidelity to the original charism, re-educating those who resist and constraining the recalcitrant by force? What is this “developing projects to promote a culture of encounter and dialogue” if not the application of religious indifferentism and conciliar ecumenism?

Here is the distressing horizontal vision of religious life, devoid of any supernatural impulse, which is held by those who ought to guard it as a precious treasure of the Church. A vision in which it is possible to be “brothers and sisters of all, regardless of faith,” making not only the embrace of the religious state unnecessary but also Baptism itself, and along with it the Redemption, the Church, and even God Himself.

We have understood, in these times of crisis, that whoever is constituted in authority is now disconnected from those over whom he holds command. The so-called pandemic has shown that those who govern are obedient to the orders of supranational powers, while citizens are deprived of their rights, and any form of dissent is censored or psychiatrized, according to a recent felicitous expression.

The same thing happens in the Church: the highest levels of the Hierarchy obey the same powers and deprive the faithful of their rights, censoring those who do not intend to renounce their faith and do not accept seeing the Church being demolished by its Ministers. João Braz de Aviz is perfectly aligned with Jorge Mario Bergoglio, and both of them zealously support the establishment of the New World Order.

This is the painful reality with which we must daily confront ourselves, and for which we must pray, fast, and do penance, imploring the intervention of God and the Most Holy Virgin to help us. In this supernatural battle, the contribution of religious men and women is fundamental: this is why it is more necessary than ever that consecrated souls rediscover the sacrificial dimension of their vocation, offering themselves in holocaust as expiatory victims. This, after all, is the heart of the religious vocation and of being Christian itself: becoming like Christ and following Him on the Cross, so as to sit at His right hand in blessed eternity.

I therefore invite those who have the privilege of having chosen the state of perfection to pray with renewed ardor, to fast with zeal, and to do penance. Finally, let us ask the Holy Spirit to touch the Ministers and Religious who have been led astray, granting them the gift of repentance and the grace of forgiveness.

[Comment Guidelines - Click to view]
The Remnant values the comments and input of our visitors. It’s no secret, however, that trolls exist, and trolls can do a lot of damage to a brand. Therefore, our comments are heavily monitored 24/7 by Remnant moderators around the country.  They have been instructed to remove demeaning, hostile, needlessly combative, racist, Christophobic comments, and streams not related to the storyline. Multiple comments from one person under a story are also discouraged. Capitalized sentences or comments will be removed (Internet shouting).
The Remnant comments sections are not designed for frequent personal blogging, on-going debates or theological or other disputes between commenters. Please understand that we pay our writers to defend The Remnant’s editorial positions. We thus acknowledge no moral obligation whatsoever to allow anyone and everyone to try to undermine our editorial policy and create a general nuisance on our website.  Therefore, Remnant moderators reserve the right to edit or remove comments, and comments do not necessarily represent the views of The Remnant.
back to top
Last modified on Monday, February 1, 2021
Tweet
More in this category: « Jumping the Stimulus Turnstile PERSECUTION RISING: The Coming Crackdown on Faithful Catholic Priests »