Pardon my Boat-Rocking: A Respectful Debate 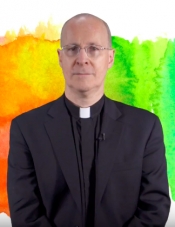 After sixty years of “off and on” dialogue with new breed, trendy philosophers and theologians, this author has finally, at long last, come to the most obvious conclusion that the only way to counter the writings of a Jesuit (in this case, Rev. James Martin, S.J., the editor of America magazine) is with the writings of another Jesuit (in this case, Rev. Edward Cahill, S.J., the noted Irish scholar).

Perhaps that other additional Jesuit who is currently in the ecclesiastical “top spot” (need we say more as to just whom this reference is made) might also enter into this discussion.  In any case, St Ignatius Loyola might well be wondering in his eternal reward—if not actually turning in the earthly domain of his bodily “other half”—whether or not his spiritual sons actually have their act together.  “A house divided against itself shall not stand” or “In My Father’s House there are many mansions.”  Scripture can be cited to support both Jesuitical points of view under the all-embracing Jesuitical umbrella.  One common motto of the most erudite Jesuits themselves, however, might serve as the “divining stone”—the stone which is not a stone—for deciphering the Jesuitical elixir of truth and light from the patently non-Jesuitical base of falseness and error: the educational maxim practised by all Jesuits, namely, “Assume nothing.”

Those of us who went to Jesuit high schools or universities well understand this motto. We may have had Fr. Kramer, S.J’s “Correct Grammar” for English or Fr. Henle, S.J’s “Latin Grammar” for our first year of struggling with Caesar’s “Gallic Wars” (Omnia Gallia est divisa in partes tres—does that bring back memories?.)  Nevertheless, we always started each school term as a tabula rasa, a “blank slate” as far as our Jesuit teachers were concerned, upon which correctness had to be inscribed—“set in stone”, if you will—before that particular school term was finished.  “Thorough” does not adequately describe this colossal educational approach.

Assuming ourselves (as we are not Jesuits, although possibly Jesuit-trained) that that Jesuit who is making the most “assumptions” or lacking correctness is the Jesuit who is most in violation of his own Societally-Corporate wisdom (and thereby most inherently self-contradictory), we can then proceed to determine which Society of Jesus member has the best Jesuitically-defined “case”, if you will, for his philosophical or theological contentions.

First of all, let us consider Fr. Martin’s most recently published piece on the America website entitled “How Catholic Leaders Helped to Give Rise to Violence at the U.S. Capitol.”  Father Martin stated in the article: “More bluntly, a Vatican directive from 1994 says that a priest ‘ought to refrain from actively engaging himself in politics.’”  My question to you, Father, is “Are not you a Catholic priest?” and “Are you not, by your very comments in this article, actively engaging yourself in politics?”  If so, it seems evident that you yourself are “assuming” your own personal right to actively engage yourself in politics, even though your actions contradict the very 1994 Vatican directive you cite.

Furthermore, Father, you state that “church teaching” (conveniently summarized in a previous America article) “leaves the final choice on voting to an individual’s formed conscience.”  Certainly that admonition might apply to non-Catholics; however, as Pope Pius XII has stated, Catholics are obliged to keep and maintain a “correct” conscience—that is, a conscience which is neither slack nor scrupulous.  For Catholics, their consciences must not only be formed, but must also meet the additional criterion of correctness.  Once again, your assertion regarding conscience stands blatantly at odds, this time, with your own established Jesuit criterion of correctness, and, hence, presents another evident instance of a violation of your own Jesuitical wisdom, and hence, another evident instance of your own self-contradiction.

Perhaps Our Lord’s words “Take the plank out of your own eye before you seek to extract the speck from the eye of another” has application here.

Is anyone keeping score?  We have not even begun to look at the writings of Rev. Edward Cahill, S.J.  Rev. Fr. Edward J. Cahill, S.J. was born in Ballyvocogue, Cappagh, County Limerick, in Ireland in 1868.   He died in 1941.  In 1926 he founded “An Rioghacht”, the League of the Kingship of Christ.  In 1932 he wrote a book entitled “The Framework of the Christian State.”  The following is a quotation regarding political liberalism from that work:

Before proceeding to sketch the nature and history of political Liberalism, or Secularism, as it is sometimes named, it will be useful to recall what we have already touched on in treating of the civil organisation and political principles of mediaeval Europe.  The whole political and social structure centred round, or rather reposed on, the principle that God was its Author; and His divine ordinance was recognised as the fundamental sanction of all valid rule and the basis of all social and civil obligations. The general acceptance of this principle secured reverence and obedience towards the government while setting strict limits to its power, and affording safeguards to the subjects against oppression.

When, on the other hand, this principle is ignored, or in other words, when God is eliminated from the political organism, and His rights rejected in favour of what are termed  the “Rights of Man” (as occurs in the Liberal system),  the foundations of legitimate authority are taken away; there is no fixed principle to set limits to the competency and scope of the ruling powers;  and no real safeguard against tyranny and abuse of authority (op. cit., pps.112-113).”

Sweet Heart of Mary, Be Our Salvation

[Comment Guidelines - Click to view]
The Remnant values the comments and input of our visitors. It’s no secret, however, that trolls exist, and trolls can do a lot of damage to a brand. Therefore, our comments are heavily monitored 24/7 by Remnant moderators around the country.  They have been instructed to remove demeaning, hostile, needlessly combative, racist, Christophobic comments, and streams not related to the storyline. Multiple comments from one person under a story are also discouraged. Capitalized sentences or comments will be removed (Internet shouting).
The Remnant comments sections are not designed for frequent personal blogging, on-going debates or theological or other disputes between commenters. Please understand that we pay our writers to defend The Remnant’s editorial positions. We thus acknowledge no moral obligation whatsoever to allow anyone and everyone to try to undermine our editorial policy and create a general nuisance on our website.  Therefore, Remnant moderators reserve the right to edit or remove comments, and comments do not necessarily represent the views of The Remnant.
back to top
Last modified on Wednesday, January 27, 2021
Tweet
More in this category: « Father Calvin Goodwin, FSSP, RIP RACE-BAITING: Just say NO to Leftist hate!  »