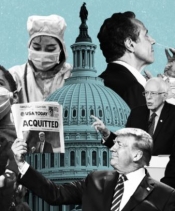 Some scholarly soul observed that 2020 began as 1974 with a presidential impeachment.  Then it turned into 1918 with a global pandemic that quickly morphed into 1929 with the March stock market crash, followed by 2008 with a recession, and finally 1968 with civil rights protests.

Portland, Oregon’s district attorney refused to prosecute anyone charged in their summer riots.  Only in 2020 America can you get arrested for opening your business, but not for looting one.  It took until 2020, to reach 1984. The Ministry of Truth is alive and well with the thought police on patrol working nonstop through social media.

Fake news medal: The University of Texas conjured up the “Dan Rather Medal for News and Guts” to honor the former CBS News anchor, who was canned for reporting lies about President George W. Bush.  Our longhorn friends are mistaking gall with guts.

Best threat:  On the 40th anniversary of John Lennon’s death where Yoko Ono announced plans to record a new album dedicated to world peace. And if peace is not had, the album will be released.

Most amusing holiday advertisement: Kay’s Jewelers:  Saying every kiss begins with K, not true, most begin with alcohol and poor judgment.

Editors take note:  Internationalliving.com is a website that explains “how to move out of the US” saw a swell of 1676% in traffic in 2020.

Trumpian trophy:  Who else?  Donald Trump.  After Rolling Stone magazine listed their top-ten concert tours of 2020, Trump was all ten.

Top two question of the year: Why during the COVID outbreak, we witnessed the lowest flu season in five years?  According to the CDC, “influenza positivity rates fell 98% in 2020 during March 1 through May 16.”  Have flu cases been misdiagnosed as COVID infections?

Word of the year:  Covidiocy:  It is the combination of COVID with idiocy.  Hoover Institution defines as “the irrational and hypocritical underside of the pandemic.”

P.T. Barnum honor roll:  Being made of flesh and bone rather than cardboard, people were denied entrance to plenty of sporting events, but not so for all those cardboard cutouts that fans purchased of themselves.

White-supremacist of the year: Supreme Court Justice Amy Coney Barrett who adopted children from that Third World paradise, Haiti, makes her according to Democrats, “a white-supremacist colonizer.”

You can’t make it up trophy: Seattle’s first black female police chief Carmen Best resigned after her pay and police funding was cut by Seattle’s non-black city council in response to street protests about – white privilege.

Phrase of the year: “Cancel culture.”  Call it what you want, but the ideological coercions of the left remain unchanged.

Team name of the decade: The Washington Redskins now known as the Washington Football Team.  Considering their management and play, their acronym should be – WTF.

Top Race Card Driver: NASCAR’s Bubba Wallace who believed a noose in his garage was placed there because he is black.  The FBI’s investigation said it was an old garage door opener.

Anticipated Turbo Tax question:  Did you steal a TV during the 2020 riots that is not working properly?  If so, you may be entitled to compensation.

Flag for the ages:  The newly created U.S. Space Force whose emblem resembles the logo for Starfleet Command in the Star Trek sci-fi series.

Perspective award: “The Last Dance,” the documentary about Michael Jordan’s final season with the Chicago Bulls.  It runs for ten episodes, which is one more than Ken Burns needed to examine the Civil War.

Two best memes: The MAGA hat: “This hat doesn’t stand for racism or hate. It only triggers it in Liberals.”  Secondly: “Can we trade our leftists for those Hong Kong protesters? They want to be Americans and our leftists, communists.”

To honor the memory of my longtime friend and U.S. Marine who, along with his son, gave his life in the defense of their home during Hurricane Sandy in Staten Island, the eighth annual John Filipowicz Award:  All those who had no choice but to serve those in need during the COVID pandemic.

[Comment Guidelines - Click to view]
The Remnant values the comments and input of our visitors. It’s no secret, however, that trolls exist, and trolls can do a lot of damage to a brand. Therefore, our comments are heavily monitored 24/7 by Remnant moderators around the country.  They have been instructed to remove demeaning, hostile, needlessly combative, racist, Christophobic comments, and streams not related to the storyline. Multiple comments from one person under a story are also discouraged. Capitalized sentences or comments will be removed (Internet shouting).
The Remnant comments sections are not designed for frequent personal blogging, on-going debates or theological or other disputes between commenters. Please understand that we pay our writers to defend The Remnant’s editorial positions. We thus acknowledge no moral obligation whatsoever to allow anyone and everyone to try to undermine our editorial policy and create a general nuisance on our website.  Therefore, Remnant moderators reserve the right to edit or remove comments, and comments do not necessarily represent the views of The Remnant.
back to top
Last modified on Friday, January 1, 2021
Tweet